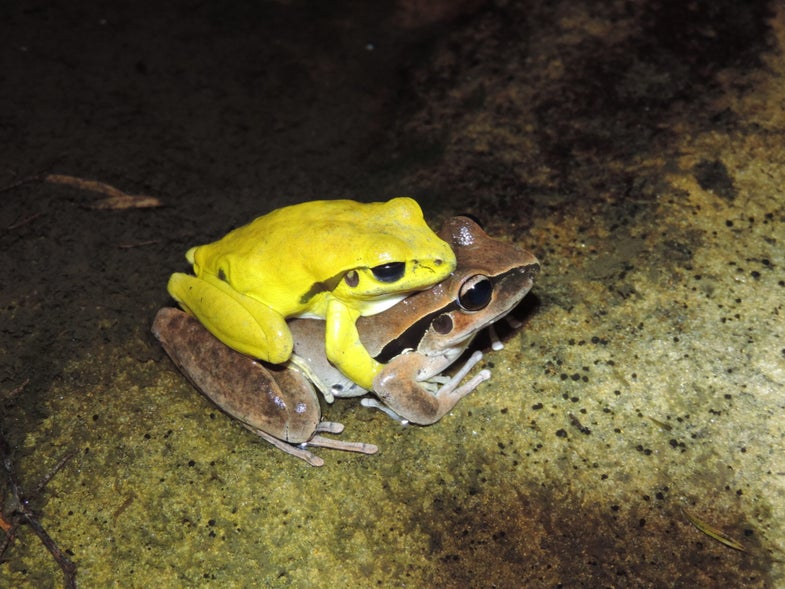 Some frog species have a special strategy for breeding. They gather in a huge group of hundreds or even thousands of frogs. In the pandemonium, the ribbeting rabble can have difficulty distinguishing between males, females, and tennis balls.

A lot of the frogs that have sex en masse also turn yellow during the mating season. Rayna Bell, a research zoologist at the Smithsonian Institute, teamed up with Australian researchers to see if these traits actually tend to come in pairs—and if so, which behavior came first.

The sexy frog pile reproduction strategy presents interesting challenges for the animals involved. Bell compares the slimy jumble to a dark nightclub—no one can see what’s going on. “It gets a little chaotic,” says Bell. Could color changes be meant to help males stand out in the writhing crowd?

In 2012, Bell started researching how the genetics of African reed frogs varied across different areas. She wasn’t studying why some species of this frog have males and females that are different colors, but people kept asking her about this sex difference during her research presentations. Then a group of scientists in Australia contacted her to tell her they were interested in pursuing that very inquiry. Thus began a virtual collaboration. “I hope to meet them in person someday,” says Bell.

The research team did not go out into the wild to find colorful frogs for this study. They couldn’t rely on natural history collections, either, since preservatives cause amphibians to turn a universal grayish color. Instead, they drew upon previous observations, hit up the library and gathered old field notes. “We have articles going back hundreds of years that you can’t find on the internet,” says Bell. “The study extended beyond any of our individual expertise.”

The literature investigation revealed that frogs known to temporarily change color during mating season are likely to also join in the crowded bacchanals. The team further supported this connection with a frog ancestry test. They dove through genetic history to discover what evolved first, the group mating strategy or the color change. In most species, the breeding method preceded the temporary hue adjustment. So it seems likely that the color changes evolved to make this method of breeding more successful. In this situation, the males probably aren’t trying to attract females with flashy tones as much as warn other males of their sex, to keep everyone from wasting a precious chance to spread their genes. Of course, this explanation is still in the “probable hypothesis” category, since scientists don’t actually know how this amphibian’s vision system works. “We have way more questions than answers at this point,” says Bell. “We don’t know if they can even see these differences.”

Frogs can’t change color within a few seconds like chameleons do. Their little bodies fill with hormones that spread out or cluster the pigments in their skin. For changes that last more than a few months, they may even make additional pigments. Scientists don’t know exactly why frogs turn yellow, but it might be the easiest transition for the frog skin to make or the best signaling color for other frogs, or both.

Even if yellow skin is more of a deterrent for other males than an aphrodisiac for females, these croaking casanovas have other methods to indicate they’re ready to get it on. “The natural variation of frog breeding seen in nature is bizarre,” says Adam Leache, a biologist at the University of Washington. Research has traditionally focused on frog calls—even an amateur herpetologist can identify the pebbles-knocking-together sound of the cricket frog. Frogs that live in noisier areas, such as near a waterfall, sometimes wave or lift up one of their back legs. This wealth of interesting mating rituals have left researchers with a lot to study. “I think that’s fascinating for us to have a better understand of how color works,” says Bell. “It’s showing us that frogs probably have more complicated communication channels.”

Bell says she next hopes to look into the frog visual system, so she can make sure these amphibians can see one another’s sexy yellow hue. “Compared to other types of vertebrates, we don’t know that much about what frogs can see,” she says. Since they live in both water and land over the course of their lifetime, frogs might even give us clues about how our own vision developed. “I think it’s inspiring to think about how nature has evolved all these crazy strategies,” says Bell.