Humans have created 9.1 billion tons of plastic. Here’s how you can help stop the madness.

A new study shows just how much plastic junk we've made, and the numbers are grim. 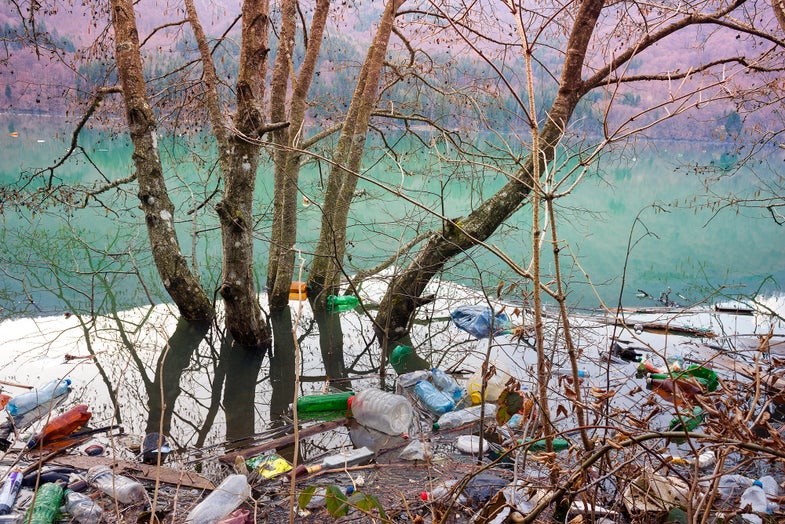 Humanity has manufactured a lot of plastic since the 1950s, and most of it ends up in landfills or nature. panaramka.ukr.net
SHARE

No matter how many times I tell my local Thai restaurant that I don’t want plastic forks with my take-out, I open the bag to find handfuls of unnecessary eating utensils in there, every time. Roland Geyer, an industrial ecologist at the University of California at Santa Barbara, has similar problems. “Sometimes at the supermarket I have to fight to not get plastic bags,” he says.

Plastic is cheap, strong, and versatile. As a result, we use it for nearly everything—handing it out like candy and then throwing it away, of after a single use. When future archaeologists dig up the remains of our society, they will probably know us by the layer of plastic garbage we’ve strewn all over the planet.

Geyer and his colleagues have quantified just how much plastic crap humanity has made since we started mass producing it in the 1950s. After analyzing data from trade associations and other industry sources around the world—an effort that took years of detective work, Geyer says—they concluded that all of the plastics we’ve ever made total about 9.1 billion tons.

That’s the weight of 25,000 Empire State Buildings in total, or about 2,400 pounds of trash for every person currently alive on this planet. And it’s not as if we can blame those who came before us for most of the waste.

“Half of those 9.1 billion tons we’ve made only in the last 13 years,” says Geyer. “That, for me, is the most surprising number.”

Unfortunately, most of that plastic isn’t going anywhere anytime soon. The team’s analysis, which was published today in Science Advances, found that only 9 percent of plastics get recycled. We incinerate 12 percent, and the remaining 79 percent builds up in landfills or in nature. There, plastics can take hundreds, if not thousands, of years to break down.

In the meantime, even the most remote parts of the world are getting trashed. Lakes and oceans are choked with plastic debris, and birds and marine creatures end up eating it or getting stuck in it.

In summary, it sucks. But all is not lost. One of the good things about the study is that it underlines the areas where there’s room for improvement. Geyer and his colleagues found that packaging was the biggest source of plastic waste; most of those takeout boxes, grocery store casings, and bubble wrap around our online purchases only get used once before we throw them out.

“Finding a way to reduce the amount of plastics in packaging, especially if they’re used once and then thrown away, is definitely an effective way to do something about this,” says Geyer. Here are a few suggestions.

How to reduce plastic waste

How many times do you take out the trash in a typical week? Challenge yourself to cut that in half (note: not by lazily allowing it to pile up in your kitchen, but by working to create less garbage in the first place). Added bonus: the less trash you make, the less time you have to spend hauling trash out of your kitchen.

2. Think before you buy

Sure, that pre-cooked roasted chicken in the grocery store looks tasty, but maybe there’s another dinner option that doesn’t use a bulky plastic container. Or instead of buying Brussel sprouts pre-wrapped in plastic and Styrofoam, you could buy loose ones and load them into reusable bags.

Between the plastic box, the plastic silverware, and the plastic bag that carries it all, this is a big one—especially if you buy lunch every day at work. Consider cooking extra food on the weekends and packing leftovers into reusable containers for the work week. You’ll be healthier (and less broke) if you cook at home anyway!

Keep a small one in your purse, if you’re a lady, and store the rest by the front door, where it’s easy to remember them on the way out, and put a few more in the trunk of the car. Same thing goes with your reusable coffee mug—put it where you know you’ll remember it. They’re not doing the planet any good if you’re not using them.

After I unload fresh groceries into the fridge (or my stomach), I put clean produce bags right back into my reusable grocery bag, to use on my next supermarket adventure. Or you can get more creative. For example, after you finish a loaf of bread, you can use the bag to carry a sandwich to work. Most of the baggage you throw away isn’t actually damaged or soiled, so just be smarter about keeping it around.

7. Go for the paper option

Nobody wants to wash 30 plates and cups every time there’s an office party or you have company over. But instead of getting plastic plates and cups, consider opting for paper. That way, if the trash finds it way out into a landfill, it’ll at least decompose in a reasonable amount of time instead of sitting around for thousands of years.

8. Do you really need that plastic straw or stir stick?

It seems like nothing, but straws are adding up to make a big problem for the environment. Do you really want that straw to get stuck up a poor sea turtle’s nostril? No. Consider a reusable glass, silicone, stainless steel, or bamboo alternative—or just going strawless.

9. Bring your own water bottle

Try to kick the habit of buying bottled water. If you know you’re going to be thirsty, BYOB. It’s another way to save money!

Tell the takeout guy that you don’t want disposable eating utensils (who knows, maybe if enough people ask, they’ll finally listen). Also, bring a set of metal eating utensils to work to eat your lunch with—even if you know you’re going to get lazy and buy a salad downstairs.

11. Use jars or Tupperware instead of plastic wrap

Ok, I admit it: I’m guilty of storing half a lemon or leftover onion slices in Saran Wrap. Tupperware would be just as easy, though, and less wasteful. Another option: reusable food storage bags.

Changing old habits can take time and patience, especially when the changes require a bit of extra work. And most of us will probably never be able to reduce our plastic use to zero. That’s ok. Just remember to give yourself a mental pat on the back every now and then, because every little bit makes a difference.

“We’re not saying we immediately need to stop using plastic,” says Geyer, “but maybe we need to rethink how we use plastic, and what we use it for. Making sure we get a long time of use out of it is one way of making sure we don’t drown this planet in plastic.”