The great Pacific garbage patch is even trashier than we thought

The ocean is flooded with plastic. 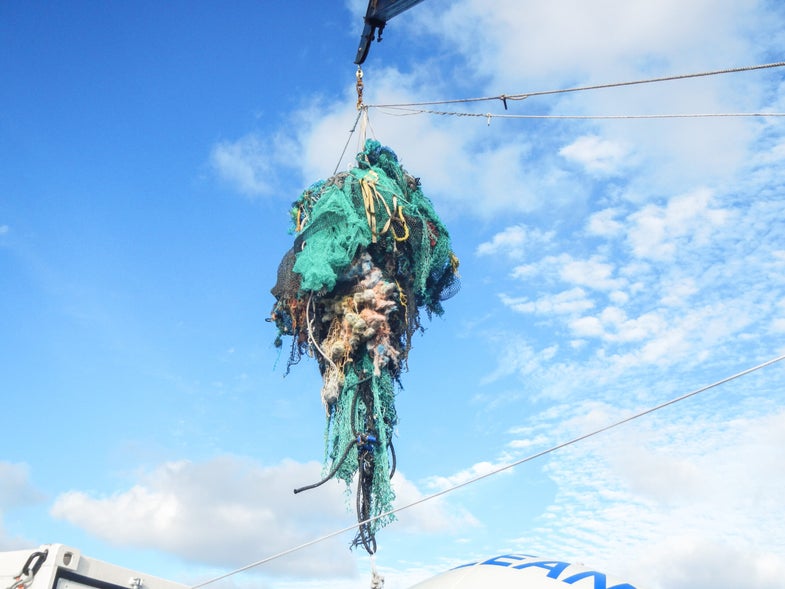 Plastic is everywhere, from our homes and everyday lives all the way up to the illusorily pristine Arctic. The oceans are no exception—our high seas are accumulating plastic just as fast as we can push it out into the world.

In a new paper in Scientific Reports, researchers found that the infamous great Pacific garbage patch contains 16 times more plastic than previous estimates showed, and it seems to be increasing over time.

The great Pacific garbage patch is one of six areas of the ocean known to accumulate plastic, located in the north Pacific Ocean. While there is a lot of plastic there, the debris aren’t clumped together like some floating landfill. Instead, the plastics (many of them broken down into teeny tiny pieces) are distributed widely across an area of about 617,000 square miles.

This particular study didn’t just trawl the zone with screens to measure the damage. They also flew planes from California to do aerial surveys of the patch. Part of the reason that this survey found so much more plastic than others was that it took into account ‘megaplastics’ instead of just focusing on ‘microplastics.’

“We did some research a few years back trying to assess how much plastic is floating on the ocean, and we found that using those methods we’re giving a bias to small debris,” says Laurent Lebreton, lead study author and oceanographer at The Ocean Cleanup. But ships also reported larger bits of plastic, so Lebreton and colleagues decided to look for those using aerial techniques.

The Ocean Cleanup is a foundation focused on removing debris from the oceans. They plan to deploy technology to scoop up manufactured debris, a plan that drew criticism when announced. The group anticipates launching trash collectors in the Pacific this year.

But for now, the trash is still out there. And the birds-eye view helps give researchers an idea of what that debris actually is.

“The use of aerial transects is a very nice complement to more laborious and limited trawling approaches that dominate the recent literature. The values reported for microplastic debris are in line with a range of papers published over the decades, but as the authors point out their very high estimates of total plastic mass are driven by their observations of ‘megaplastic.’” Angelicque White, an oceanographer at Oregon State University who was not involved in the study, said in an email.

These larger pieces of plastic, like bottles, lids, and fishing nets, are all far denser than tiny particles of plastic. As a result, they add a lot to the total debris estimates. The authors suggest that somewhere between 45,000 and 129,000 tons of plastic are floating within this particular patch of ocean.

By weight, the larger plastics (two inches or more) make up most of that total. Microplastics were vastly more numerous—but being tiny, didn’t contribute nearly as much to the weight. Nearly half the garbage came in the form of fishing nets.

Plastic nets can continue to catch fish and other marine life long after they are abandoned to the sea. This is called ghost fishing, and becomes a larger problem with every net or trap that is tossed overboard.

“The prevalence of ghost nets and discarded fishing gear is well documented, so this is not necessarily surprising,” White said. “But the authors have done a excellent job of using a variety of survey methods to quantify this debris.” This type of debris can and should be prevented, White added, but efforts must be global; ocean currents can easily sweep waste all around the world.

The authors also found that the sheer mass of plastic in the oceans has gone up over time, from 0.88 pounds per 0.39 square miles in the 1970s to 2.7 pounds per 0.39 square miles in 2015. That mirrors the increase in plastic production over the past several decades, as the material has become increasingly ubiquitous. But there are several other factors to consider. One is the 2011 tsunami off the coast of Japan, which swept vast amounts of debris out to sea. The other is that previous studies primarily focused on small microplastics, not the larger ‘megaplastics’—so we don’t have a full understanding of how that part of the problem has changed in recent decades. But Lebreton and colleagues did find that microplastics, which have been examined for years, have increased in concentration.

And there’s still plastic that hasn’t been tracked down yet.

Though the study found a lot more debris than previous estimates, it still doesn’t account for a lot of the plastic that makes its way out to the ocean only to disappear. Debris can sink into the sea or degrade, but researchers are still trying to make a grand accounting of all the trash we’re pushing offshore.

There’s a lot more research to be done to get a sense of the scope of it all, but studies like this are a start. But we don’t need more data to know what we should do: reduce the amount of plastic that goes into the oceans in the first place. That means cleaning up marine debris like nets, and reducing the influx to the sea from land.

“The challenge with microplastics in particular is that it really is not feasible to clean them up,” White said. “Reducing the waste stream is the only current means to slow the inputs of plastic to our ocean.”