A healthy reef is alive with music, but the chorus fades as the coral dies.

It's bad news for fish when their homes go quiet. 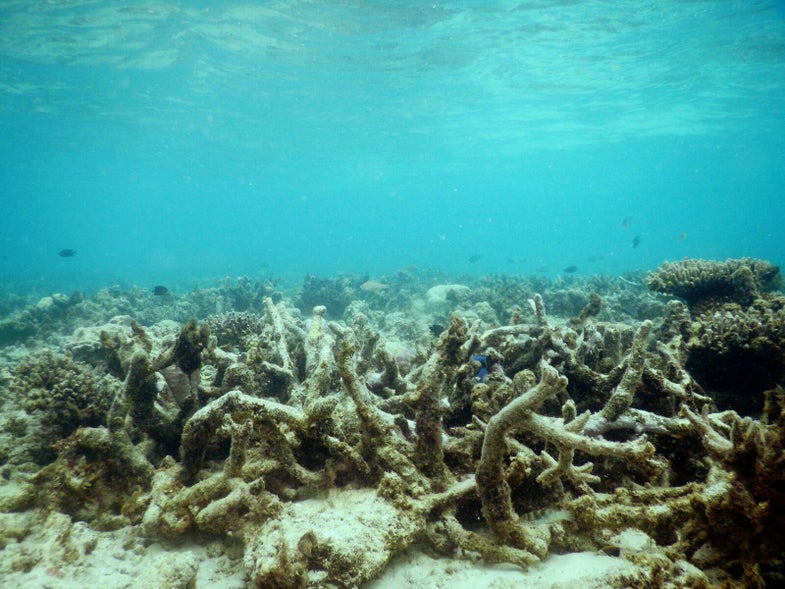 Take it from me: there’s a lot of music under the sea. A healthy section of Australia’s Great Barrier Reef, for instance, is full of it—damselfish hooting, clownfish chirping, shrimp clicking their claws. “There’s this whole sort of orchestra of animals making noise,” says University of Exeter PhD candidate Tim Gordon. But when reefs get damaged, animals die and the orchestra stops playing. That silence makes it harder for young fish that have grown up in the open ocean to find a way back to their adult homes, further degrading the already-suffering reefs.

“A reef without fish is really a reef that’s in trouble,” says Gordon. The marine biologist is the lead author on a new paper, published Monday in Proceedings of the National Academy of Science USA, that compared the sounds of coral reefs recorded in lagoons around Lizard Island in 2012 before several major climate change- related events to recordings taken in the same places and similar circumstances four years later. What they found was a 15 decibel drop in reef noise. With further experimentation, they showed that a quieter reef attracted no more juvenile fish than the open ocean did.

To do this study, Gordon and his colleagues took their two recordings of the reefs and played them over underwater loudspeakers on sites around Lizard Island, Australia, along with a control group of open ocean sounds. They found that fish larvae were eight percent less attracted to the reduced sounds of the damaged reefs, while 40 percent fewer juvenile fish chose to settle on those reefs.

“It surprised me how consistent the results were [and] how strong the results were,” says Dave Mellinger, a marine bioacoustics research at Oregon State University who wasn’t involved in the new study. Across the species of tropical fish studied, the settlement rate of fish was remarkably consistent, he says, which just provides “another piece of evidence that sound is really important in the ocean.”

How fish find their way back to the reefs from the open ocean as juveniles is poorly understood, Mellinger says. This new study provides evidence that sound is a key part of that process. When there, fish play vital roles in reef ecosystems, from their mutualistic relationships with other species like anemones to their role as “cleaners” of damaged reef. Some species of reef fish eat the algae that grows on dead reef, allowing new polyps to help it regenerate. But, as this new paper demonstrates, when reefs fall silent, juvenile fish don’t make their homes there, preventing the reefs from making at least some comeback.

Three dramatic events affected the northern parts of the Great Barrier Reef between 2012 and 2016: Cyclone Ita, Cyclone Nathan and, in 2016, a mass bleaching event that hit the whole Great Barrier Reef. This study shows that the effects of these events have far-reaching consequences for potential reef recovery. The quieter and less complex reef sounds get, the less possibility that fish will return to help reefs recover.

The grim fate of Earth’s coral reefs has been in the news for some time now—with related factors like changing weather and ocean acidification killing off miles of reef, they don’t need any more bad news. But Gordon says people shouldn’t despair, although for him personally, hearing the two recordings was “absolutely heartbreaking.” Reducing carbon emissions is the long-term solution for helping the reefs, he says. And other studies suggest it’s not too late to change their fate.