Can Our National Flagship Be Saved? 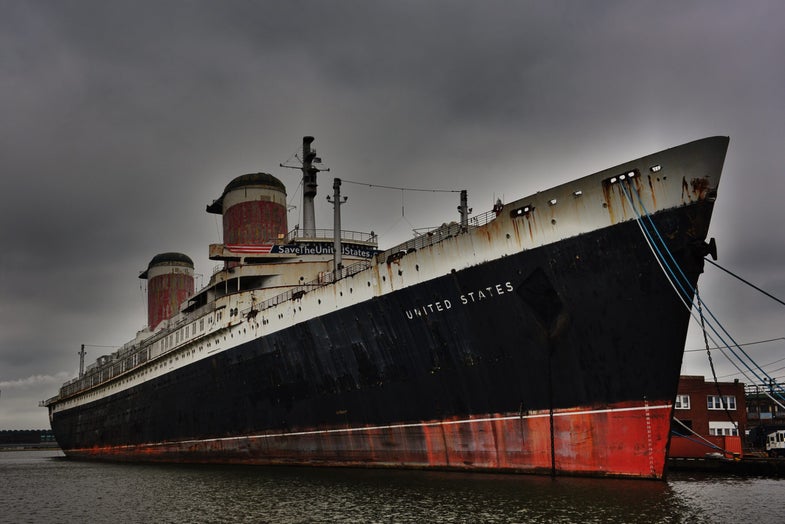 Beyond her technological achievements, the United States, which carried 1,928 passengers and 900 crew on Atlantic crossings between 1952 and 1969, is a marvel of mid-century design. In our 1952 article, we touted her elegance: "There is a lightness and easiness about her lines. The bow springs forward not sharply, but cleanly and in harmony with the bulk behind it. The white superstructure and the great stacks lie easily on the sleek black hull.". Eric Adams
SHARE

She’s the most famous ship that never sank, and a technological triumph of her era. At her launch, she boasted the most extensive use of lightweight aluminum in any structure, full air-conditioning, and the most rigorous fireproofing ever seen in a commercial vessel. She was fast, too—the speed record she set on her maiden transatlantic voyage in 1952 still stands.

Today, in this age of bloated, outrageously overendowed cruise ships, our elegant national treasure, the SS United States, languishes at a pier in Philadelphia. There, within sight of the diners downing Swedish meatballs at Ikea, she awaits either a successful preservation bid, or the scrapyard. With luck–and a committed backer–it will be the former, says Susan Gibbs, executive director of the SS United States Conservancy and granddaughter of the ship’s designer, renowned naval architect William Francis Gibbs. “The SS United States is an American original, an iconic symbol of the nation’s post-war pride, national purpose, and industrial might,” Gibbs notes. “Not only is she still afloat, but even in her dotage, she symbolizes something important about ambition, innovation, and this nation’s can-do spirit. She tells us that anything is possible.”

A May 1952 feature in Popular Science noted the vehicle’s ambitious goal of raising the bar in nautical performance, safety, and luxury—and stealing supremacy from the Britain’s RMS Queen Mary and RMS Queen Elizabeth.

I wanted to see for myself what the experience of her three-day crossings might have been like, so I went aboard recently with several of the Conservancy’s leaders. Though all the furnishings and most of the vessel’s hardware have been removed and sold or auctioned off, the ship remains in remarkably good condition. Critically, it’s also still got its mojo. Even in its embattled state, the United States commands authority and respect.