Just how much trouble is coral in? The answer is complicated. 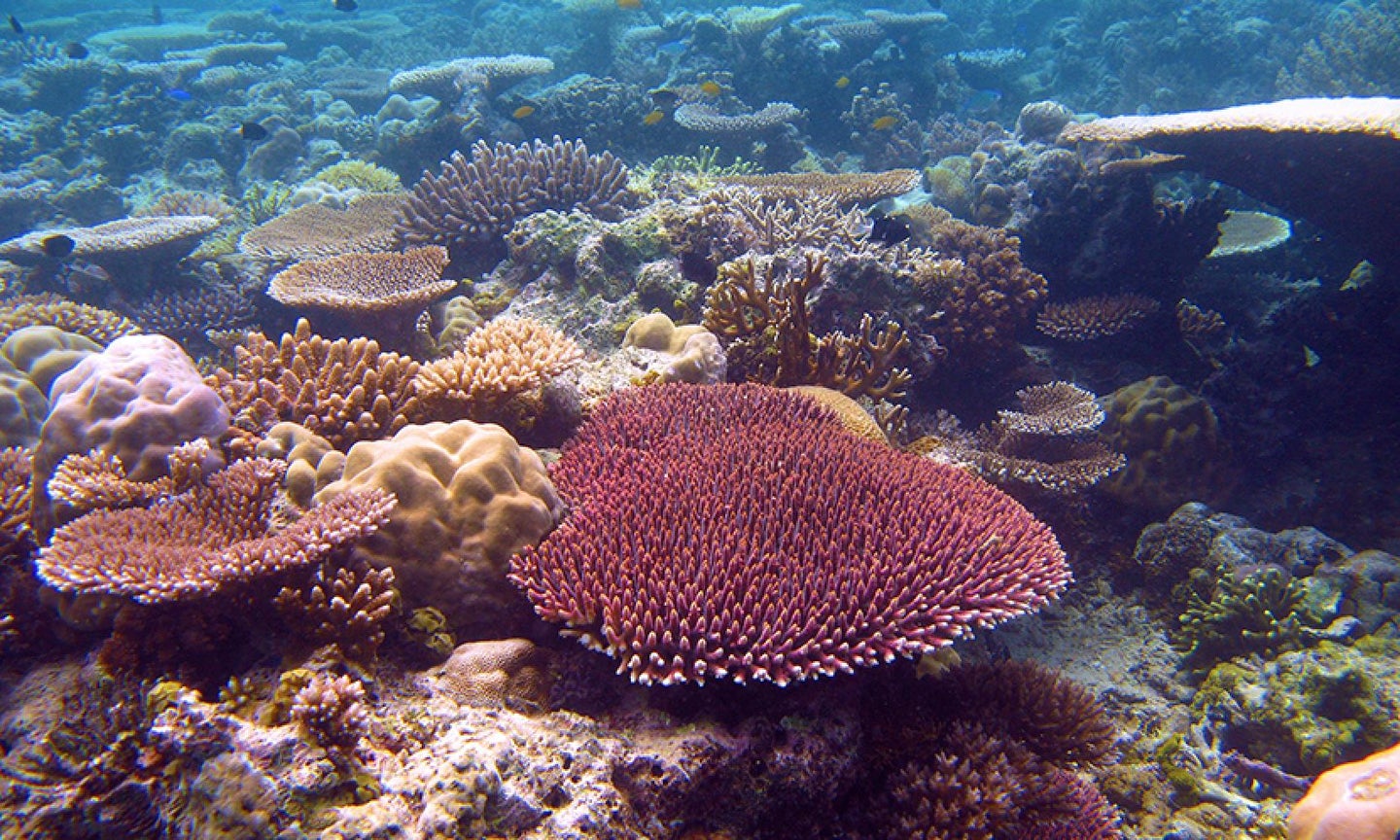 “It’s been pretty well established that if you take the present day coral and you put it into the future conditions, it will most likely die,” Mikhail Matz explains. The rather stark phrasing functions as something of an understatement these days. Just this week, a paper in Nature detailed the loss of fully half the coral on the Great Barrier Reef during the back-to-back bleaching of 2016 and 2017.

“But,” Matz goes on, lightly, “does it mean all the coral will die when they get to these conditions in real life? Not necessarily. This will depend on how much they would be able to evolve.”

Matz is an evolutionary biologist at University of Texas at Austin, and, for a coral researcher, his outlook can seem surprisingly hopeful. In a study published today in PLOS Genetics, Matz and coauthors calculated the likelihood of Australian corals adapting to—and, at least for a while, surviving—climate change. According to their model, some corals on the Great Barrier Reef will be able to stick around for at least another century, more than 50 years longer than current worst-case estimates, thanks to good old-fashioned evolution.

Unlike the models we usually talk about when we talk about climate change, the model Matz’s team built is genetic, not climactic. In other words, they didn’t just ask how modern corals would fare in a much warmer ocean; they asked how corals well would adapt to those warming waters over time. “The capacity of corals to adapt to climate change is the largest missing number of the equation to predict what will happen to them in the future,” Matz explains over the phone. To try to answer this question, Matz’s team sampled a common reef-building coral called Acropora from five locations along the Great Barrier Reef. They used the genotypes of these corals to estimate the total genetic diversity of the Great Barrier Reef as well as the pattern of dispersal of larvae along north to south currents.

It turns out there are three key pieces of information that, evolutionarily speaking, give the Great Barrier Reef’s corals a leg up. One, he explains, is that every species of coral on the Reef currently exists across a variety of conditions, including different temperatures. Corals on the northern part of the reef tend to experience warmer water on average than corals along the Reef’s southern stretch. The second important thing is that these corals adapt to a range of local conditions as well, tolerating hotter, sunnier climes closer to the surface of the ocean and cooler ones the deeper they are on a reef.

And for the third? Because of the way corals breed, releasing their eggs and sperm into the water in a single spawning event timed to the moon, fertilized larvae can drift along ocean currents for hundreds of miles before settling down to grow into colonies. The result is that roughly 1 percent of corals in the middle of the Great Barrier Reef originally came from the far north, where the conditions are much warmer, Matz explains. This means that adaptations developed in one set of conditions on the Reef have the potential to spread to other populations.

All this paints a picture of the Great Barrier Reef’s overall genetic wealth, a wealth that Matz says will likely survive even dramatic levels of population loss. It would take a reduction of much higher magnitude than the 50 percent population loss seen between 2014 and 2017 before the genetic variety of the reef could be noticeably reduced.

“Because the reefs that experienced strong die-off only represent a small fraction of the total species range, the species overall did not really experience much decline in numbers,” Matz points out. And even if you did lose half of all the individuals in a species, “What would you immediately lose? Half of the rarest genetic variants found in only one individual, yes,” he says. But as for more common variants, he goes on, you’d only lose a quarter of those genes present in only two individuals, one-eighth of those present in 3 individuals, and so on. Variants that are found in only 10 individuals (“Out of the whole species! Still pretty rare”) would only have about a one in 1000 chance of being lost.

“They have safety in numbers, in genetic terms,” Matz says. “It is like currency in your pocket, fuel for your car. If you have genetic diversity, you will go on for a while, because natural selection will always have something to choose from.”

In other words, the outlook for the Great Barrier Reef might be better than it looks through the lens of recent events: “Things will hold on for a while. There might be quite dramatic die-offs of reefs, then they will regrow,” Matz explains. “And as long as this cycle of regrowth continues, I believe that everything will be fine.”

The uncertainty lies in the “if” statements that Matz’s model is build upon, as he acknowledges. His model tends to low-ball the genetic diversity and advantage the reef has, he says, even considering the fact that his samples were collected before the heat wave that killed millions of Acropora colonies. But it also takes a potentially conservative view on how fast warming will occur in the future: just one tenth of a degree per decade. That’s the middle road in the range of climate predictions from best case scenario to worst, and there’s little that is moderate about the world’s current emissions path.

“The more dramatic the disturbances get”—drama like 2016 and 2017’s mass die-offs—”the more likely something could come in and mess up our predictions,” Matz admits. “Climate change is all about things becoming freakier and freakier. Every year is weirder than the one before.”

By definition, that kind of uncertainty is almost impossible to model. Computer models, whether of the climate or a population’s genetic survival, are built out of our understanding of how past events unfolded to create the present. Using records and observational data, we build an approximation of how the world has worked under certain variables, and then we try to peer into the future by dialing those variables into the unknown. Like tuning a TV with bad reception—or like a psychic with a good eye for your unconscious tells—these models can often show us the rough outline the future may take, but they cannot show things which have no historical analogue. If it’s never happened before, we are unlikely to be able to make it happen in a computer model, no matter how much data we have to start with.

The gap between what has been lost to climate change and what remains to lose can often divide scientists and communicators alike. The urgency of drawing attention to the vast and unprecedented upheaval of entire global systems can often sink a listener, like a pinball fumbled between the flippers, into defeat and apathy. But paint too rosy a picture, and you risk giving a false sense of security. Matz has called out research into so-called “assisted evolution”—the idea that humans might need to boost the natural evolution of corals to help them keep pace with a changing world. He says that compared to the vast diversity of the reef itself, any lab-based experiment in evolution will be less powerful than the real thing. Other scientists, like Gates and her collaborator at the Australia Institute of Marine Biology, Madeleine van Oppen, have argued that it’s too late to not explore every possible avenue for coral survival, including assisted evolution.

Part of the tension comes from the fact that corals do have an ability to adapt or evolve to their environment, but it’s not clear how far that ability will be able to stretch. “There is evidence that some coral are able to adapt very rapidly,” says Andrea Grottoli, a coral biologist at Ohio State University. “But it is not the norm.”

In a study published last year, Grottoli examined “super corals” in the Red Sea, which are able to survive five or six times more heat stress than those that perished on the Great Barrier Reef between 2015 and 2017. “There are locations on the planet that are already pre-adapted, like those. We have also shown experimentally that some species can adapt to heat stress within a year,” she points out, suggesting that some adaptation is clearly possible.

“But that is probably not the norm,” Grottoli points out. And there are too many unknowns in the system to say that this will happen for sure. For example, a 2009 study subjected coral larvae to acidified ocean water as they tried to form their initial skeletal structures. “They just make a crappy skeleton,” she said—weak, brittle, poorly formed. A genetic capacity to deal with Red Sea-level temperatures once they’re adults isn’t very helpful if they can’t survive the larval stage.

“There are still a billion survivors out there, and they’ve gone through a hell of a natural selection event,” says Terry Hughes, lead author of the Nature paper that found half the Great Barrier Reef’s corals died between 2015 and the end of 2017. Hughes has a grimly determined glass-half-full attitude, perhaps the result of surveying Australia’s bleached-white reefs starting in 2016 and 2017. This week’s Nature paper is only the latest of a series of studies he’s published cataloguing and categorizing the losses. “Our focus now should be on ensuring that those survivors which are genetically diverse can rebound as much as possible. The recovery’s going to take a decade, and it’s contingent on how many bleaching events we get in that period,” Hughes said. Another “if” to content with.

“Much of what is seen when you talk about reefs becoming more resilient is the result of simple darwinian fitness—you know, the survival of the fittest,” says NOAA’s Mark Eakin, Hughes’ coauthor. In any event where you lose individuals but some survive, you’re generally left with the tougher members of the species. But, Eakin says, if the creatures continue to suffer hit after hit, then even the fit ones are going to eventually die. “A mass extinction is going to be made up of a whole lot of smaller extinction events that are added together,” says Eakin. “It’s not one big boom and instantly everything falls over.”

“There are still a lot of corals, genetic diversity is still pretty considerable,” Matz says. His model, and the extra decades of wiggle room it suggests, to him means we should be fighting twice as hard to reduce emissions and get climate change under control while we still can. “I’ve seen claims that corals are dying, that’s it, bye bye,” he says. If that’s the case, he says, it would be too late to do anything. Instead, he sees hope—for now. “If we don’t do anything, it will get desperate. There’s still time for us to come to our senses.”