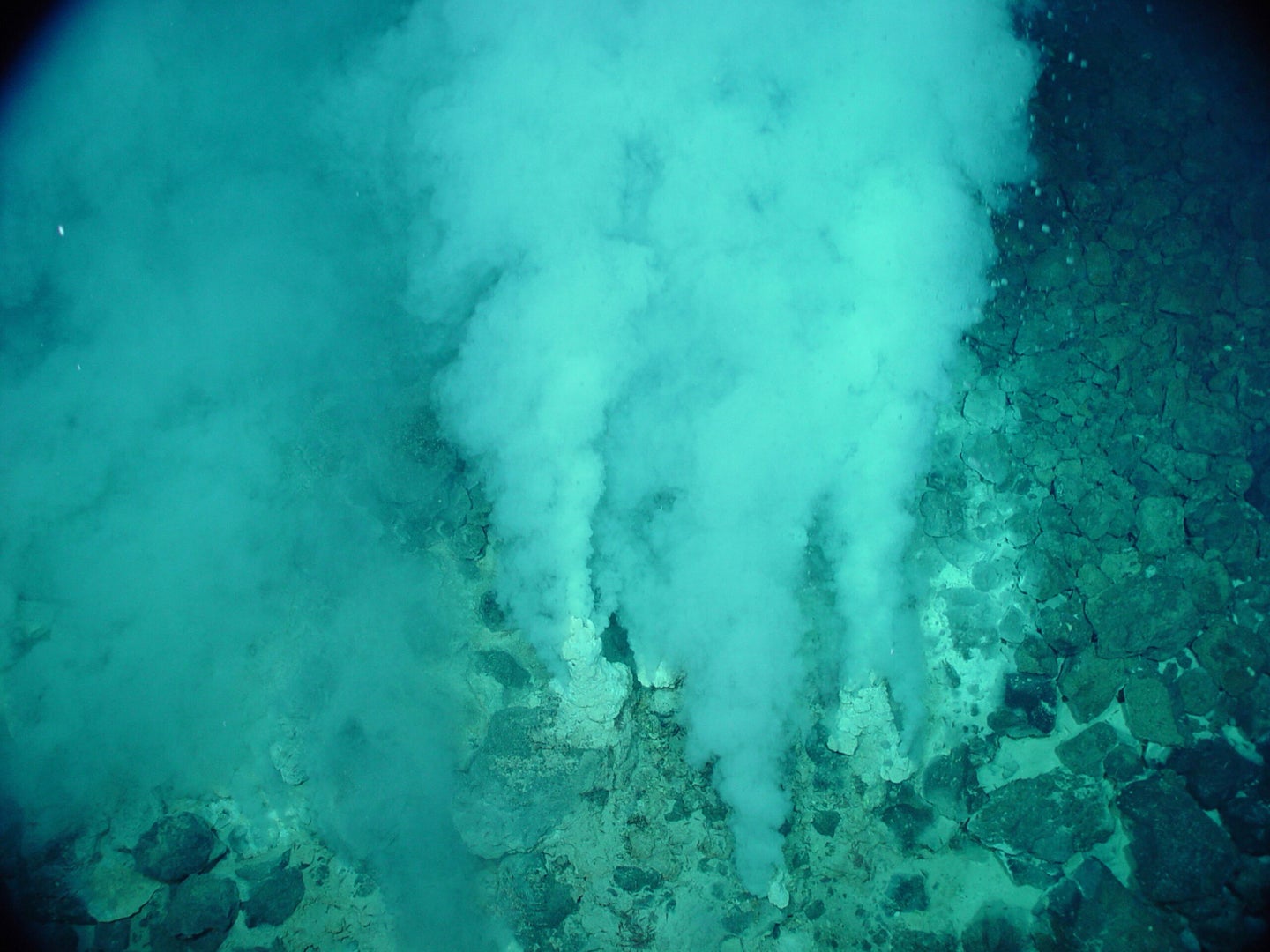 'White Smokers'—these hydrothermal vents at the submarine volcano Eifuku in the pacific are similar to the ones that will be studied by SUBSEA in Hawaii. NOAA
SHARE

Humans have been exploring the cosmos for nearly 60 years, but in all that time we haven’t found evidence of life in our solar system, outside of our own planet. Scientists still think other lifeforms might be out there, but some of the best possible habitats are hidden below thick crusts of ice on moons like Europa and Enceladus. Planned planetary missions like Europa Clipper and possible future missions to Enceladus could look for evidence of habitability, or maybe even microbial life in the oceans beneath those crusts, but before we arrive at these alien worlds to determine their habitability, NASA needs to better understand what these environments might be like. As it turns out, one of the best places to do this is right here on Earth.

Nearly two and a half miles under the surface of the water, the volcanic seafloor of Hawaii will soon host a new NASA mission called SUBSEA (Systematic Underwater Biogeochemical Sea Science and Exploration Analog). Its goal is to explore the habitability of the Lō`ihi seamount off the coast of the Big Island as an analog for icy moons like Enceladus.

In order to thoroughly explore the region, SUBSEA will operate off of a ship called Nautilus where it will deploy two submarine-type remotely operated vehicles (ROVs) called Hercules and Argus. “We’re going to be examining this from the standpoint of understanding ocean sciences in general, but also because it offered a really good analog to other potential hydrothermal systems at places like Enceladus and Europa,” says Dr. Darlene Lim, Principal Investigator of SUBSEA.

The Nautilus was set to embark on its scientific missions late last week, but was delayed by the encroaching Hurricane Lane. It’s now in transit to the underwater volcano, and you can follow along with Dr. Lim and the Nautilus by watching livestreams from the ship here or below once the scientific mission gets underway.

When the Cassini spacecraft flew through the plumes of Enceladus, it smelled, tasted and analyzed the chemical composition of the water, even pinpointing the probable temperature of the source of the plumes. “We’ve used the deep ocean as an analog for other ocean systems in our solar system,” says Lim, “but many times the analogs that have been used have been mid oceanic ridge systems like black smokers and a lot of people have that come to mind when they think of deep ocean vents.”

But the catch with these black smokers—underwater chimneys that release iron sulfide—is that their temperatures linger around 700 degrees Fahrenheit and according to Cassini data the likely temperature for Enceladus plumes are around 300 degrees Fahrenheit. This is not an ideal match. Luckily, at Lō`ihi there are white smokers (these release barium, calcium and silicon which make these particular vents white) whose temperatures stay around 392 degrees. As a bonus, the underwater pressure where they’re located in Hawaii is expected to be similar to pressure that a mission might experience at Enceladus.

That’s not all that Earth and Enceladus have in common. White smokers on Earth create a chemical known as molecular hydrogen, and just this year NASA announced that before the Cassini spacecraft ended its mission, it detected molecular hydrogen in the plumes of Enceladus. Lim says, “Data like this helps build the case that similar processes are likely happening in both locations.”

Deep sea exploration might conjure images of anglerfish, tubeworms and bioluminescent creatures out of your nightmares, but hydrothermal vents like those found in this region of the seafloor are more likely to harbor different kinds of microbial life than these surreal beings. Since life on the icy moons in our solar system could resemble those microbes, researchers are interested in knowing more about these deep water communities.

During its three week mission, the ship’s two ROVs will drift down 2.4 miles below the water’s surface to study the interactions between the water and the rocks at the volcano. These specific conditions yield life here on Earth, and could be doing the same in the solar system. “We want to study the water/rock interactions so we can begin to understand, ok, we have this kind of basalt interacting with this kind of water. This is what happens and that may be what is happening on Enceladus as well, ” says Lim. “ It’s not clear to what extent what type of microbial populations there are around the area. We’re still expecting an interesting diversity from the hydrothermal venting points.”

Both robotic vehicles will collect rock and water samples and allow the team to study the geology of the area through the eyes of planetary scientists for the first time. By collecting this kind of data at Lō`ihi, the SUBSEA team can create models and hypothesise about what we might see at Enceladus and other icy moons believed to have hydrothermal systems on their ocean floors.

Searching for life at Lō`ihi isn’t all the SUBSEA team is setting out to do. They will be livestreaming their three week long mission as a way to study the inherent time latency built into deep space missions. There is only a couple second communication delay between Earth and the moon, but light has to travel 14 minutes one way to get to Mars and up to 90 minutes to get to Enceladus. These lags in data have to be accounted for when remotely operating a rover or maybe even a submarine. “Building up some foundational knowledge for how to explore in deep space is extremely exciting to me,” says Lim. “This is a high fidelity analog that we’re going to be using as a baseline for how decisions can get made using this low latency telepresence architectures. It will help us build teleoperations not only on Mars but for the moon, for asteroids and so forth.”

While the mission is taking place on a ship in Hawaii, the SUBSEA mission control is actually located in Rhode Island, a distance of over 5,000 miles. By live streaming the underwater cameras and data collection to the team across the globe, it will inherently build in a time delay. By testing out this system on Earth in this way, it will help inform other missions about how challenging data relay might be when it’s attempted off planet. If we can’t send high resolution video to another location on Earth for example, then how can we expect to do it at Mars? Since it is likely that a first human mission to Mars could include remotely operating a rover or scientific instrument of some kind from orbit, tests like these can help build out that much needed infrastructure, long before it’s needed on a mission to Enceladus.

Next year when the Nautilus heads back out to sea, Lim and her team will introduce a time delay to mimic the natural light-time delay between Earth and Mars though rounding it down to around 10 minutes instead of 14, just to gauge how many challenges arise.

“This mission is so exciting because one of the areas in our solar system that we may want to look at in terms of present day life are some of these ocean world systems,” says Dr. Lim. “So being able to use a terrestrial system as a mechanism to make some hypothesis come together about what might be possible at an ocean system is great and very exciting.”