The world’s largest organism is being eaten alive by deer

His name is Pando and he’s very nice. 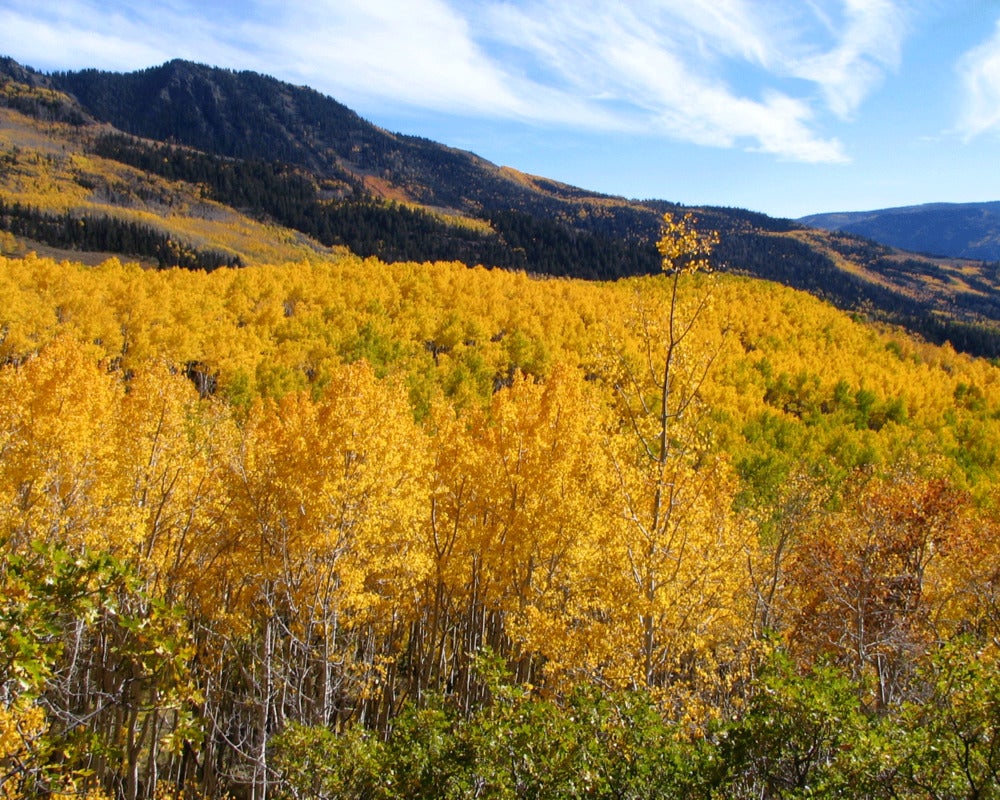 If you visit Fishlake National Forest in Utah, it may seem like you’re walking through a large grove of individual quaking aspen trees. But beneath the earth, all of those trees connect to form a 13 million pound behemoth known as “Pando.”

Technically speaking, the entire forest is one giant clone. Pando (which is latin for “I spread”) is a genetically male organism made up of more than 47,000 trees with identical genes and a shared root system. No one is quite sure exactly how old Pando is—researchers estimate the massive tree complex could be anywhere from thousands to tens of thousands of years old—and it is thought to be one of the largest living organisms on Earth. But recently, the clone forest has been shrinking from the inside out. The culprits? Hungry mule deer and cattle.

“Unfortunately, we were surprised that Pando is as threatened as it is,” Paul Rogers, an ecologist at Utah State University and author of a new paper about the tree system out this week in the journal PLOS One, wrote Popular Science in an email.

Foresters identified the clone in the 1960s and gave it the catchy name Pando in the mid-1990s. But it wasn’t until 2008 that researchers used genetic analysis to confirm that all 106 acres of Pando’s forest really did spring from the same lifeform. Aspen trees can produce both sexually (by throwing out seeds) and asexually (through a process called root sprouting), making cloned aspen trees a relatively common occurrence across the western United States. It’s a handy adaptation to survive a fire-prone landscape like Utah or Colorado. But none of the other forests can rival Pando for size.

Rogers and his team had known for some time that the cloned system wasn’t doing so great. Instead of a mix of new and young trees, for a while now, the forest was made up of increasingly older trees, between 100 and 200 years old.

To find out what was going on, Rogers, who is also the director of the Western Aspen Alliance, and his fellow researchers combined 72 years worth of aerial photo surveys with a boots-on-the-ground examination of tree health, status, and age. They also looked at animal feces and evidence of browsing (whether or not animals were munching on leaves, grass, and fruit in the area) to estimate the number of animals living there. And they examined whether fenced off portions of Pando’s forest faired better than other areas.

It turns out, that Pando has been shrinking for 30 to 40 years because the clone has not been able to replace itself with new growth. Individual aspens are relatively short-lived trees, reproducing as much as possible in a 100-plus year lifespan. The cause? Over the last few decades, the area has seen a booming mule deer population, along with elk and domestic cattle. These animals mowed down young aspen shoots as they sprouted out of the forest floor.

Mule deer aren’t a huge problem in the rest of the state, but there’s no hunting allowed in the swaths of the national forest devoted to human recreation, Rogers says. Domestic cattle can also graze in the forest for two weeks during the summer, contributing to the destruction of young would-be aspens.

Rogers says there might be some ways to mitigate the problem and help the clone start sprouting new trees again. Fencing is not ideal, but it can offer a short-term fix, says Rogers. In an area of the forest blocked off with a sturdy fence in 2013, Rogers and his team found aspen trees that had grown 15 feet in five years. Long-term, Rogers suggested using professional hunting to get the mule deer population under control.

The U.S. Forest Service has suggested insects and disease also threaten the clone forest by eating away at the older trees. But Rogers thinks it’s normal for the older tree to sicken and die eventually, he says. What’s far more unusual is that there is no new growth to replace them.

Protecting this unique ecosystem is about more than just sticking up for one clone. Aspen landscapes retain large amounts of water, an invaluable resource in the dry west. They also support a diverse set of plants and animals. “Aspen are keystone species,” Rogers says. “Thus, a strategy of mega-conservation of aspen can create positive outcomes for hundreds of species.”