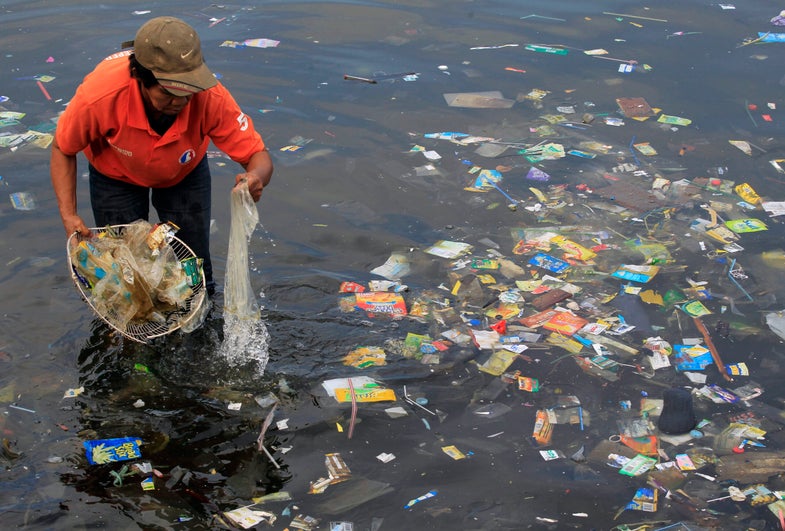 More than 4.8 million metric tons—that’s about how much plastic waste gets dumped into the world’s oceans from land each year. And this number is just a conservative estimate. Researchers believe the real amount could be as high as 12.7 million metric tons.

Researchers at UC Santa Barbara’s National Center for Ecological Analysis and Synthesis recently calculated these astonishing numbers, presenting them at the annual meeting for the American Association for the Advancement of Science. Hoping to get a better understanding of where all the oceans’ trash comes from, the researchers worked with experts in oceanography, waste management, and plastic materials science to come up with their calculations. This study marks the first time scientists have estimated the amount of the oceans’ plastics coming from land. To put their results in perspective, remember that one metric ton is equivalent 2,205 pounds.

“Using the average density of uncompacted plastic waste, 8 million metric tons — the midpoint of our estimate — would cover an area 34 times the size of Manhattan ankle-deep in plastic waste,” co-author Roland Geyer, who teaches industrial ecology at UCSB, said in a press release. According to Geyer, 8 million metric tons is also the amount of plastic produced worldwide in the year 1961. Jeepers.

The team looked at countries with coastal boarders (192 in total), calculating just how much waste each country produced for 2010, as well as how much of that waste was plastic. The next step then involved looking at each nation’s waste management infrastructure, with the researchers finding a vast range in practices. “Some solid waste management infrastructure is very good and some is literally non-existent,” Geyer tells Popular Science.

Next came the tricky part: figuring out how much of that mismanaged waste is making its way to the oceans. “There isn’t any data readily available, so we had to use case studies and regional analysis in order to get an estimate,” says Geyer. “There are studies from South America, from Australia and the Bay Area that allowed us to quantify those. But that’s why it’s such a wide range.”

Overall, Geyer and his team estimated that a small number of nations accounted for the most plastic trash found in the oceans. In fact, 20 countries were responsible for 83 percent of all of the world’s mismanaged plastic waste going into the deep blue sea. China was deemed the big bad wolf of plastic waste, generating up to 3.5 million tons of marine junk per year. The United States ranked 20th, dumping about 110,000 metric tons per year.

For decades, currents have been carrying all of this debris into the world’s five largest ocean circulation systems, known as gyres. There, the rotating flow of water creates swirling vortexes of trash, which wreak havoc on marine wildlife. Plastics don’t biodegrade, so they stick around for some time. Many unsuspecting species wind up eating bits of plastic, thinking that they are food. And plastics underwater are known to accumulate toxic chemicals over time, so ingesting this trash can be extremely hazardous for the health of sea creatures.

Fortunately, the researchers also suggest a number of methods for reducing this garbage load. But their ideas revolve around prevention rather than cleanup. “Our group believes that large scale removal from the ocean floor is not really feasible,” says Geyer. “Considering the average depth is 14,000 feet, and what is floating in the gyre, the mass majority are micro plastics which are roughly the size of plankton. How are you going to remove that without removing plankton?”

Instead, Geyer and his team suggest helping world’s biggest plastic offenders cleanup their waste management systems. They also note it’s time to start redesigning the packaging of products, so as to reduce the amount of plastics used as much as possible. If these measures are taken, the impacts could be huge. According to the researchers, reducing the amount of plastic waste by 50 percent could reduce its presence in the world’s oceans by 40 percent.