11 Ways Science and Technology Are Waging War on Winter 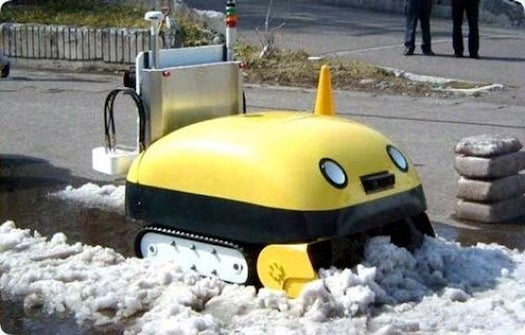 Here in New York City, we’ve just been hit with yet another round of snow, and it got us thinking: There must be somebody working on a way to get rid of this fluffy white menace. As it turns out, there are lots of people working on it! Here are some of our favorites.

Some of these methods are in wide use, some are DIY projects you can create yourself, and some are insane weather-controlling projects worthy of Bond villains. But they all come from the same place, a shared distrust of frozen precipitation and a desire to reduce its vice-like control over our everyday lives. Keep warm, everyone!

This article originally ran in 2011, but it’s just as relevant today.

The Chinese and Russian governments have decided, with considerable chutzpah, to fall victim to harsh, snowy winters no longer. They’re not just figuring out new ways of removing the snow once it falls–they want to control the precipitation before it starts. In Beijing and Moscow, that means turning to cloud seeding, a technique in which planes spray clouds with various substances (silver iodide in China, a mix of cement powder, dry ice, and silver iodide in Russia) to cause water vapor to crystallize at different temperatures than it normally would. The effectiveness of cloud seeding is slightly dubious–some experts cite a change in precipitation of only 20% at most–but it’s promising enough that the Chinese and Russian governments would attempt to use it in completely opposite ways. In Russia, the government seeks to limit precipitation: former Mayor Yury Luzhkov attempted to spray clouds in order to eliminate snow within his city’s limits. But in Beijing, a city suffering from a decade-long drought, cloud seeding was intended to spur precipitation, rather than prevent it–though Beijing residents don’t seem to thrilled at the prospect of crazy amounts of artificially induced snow.

Explosives are a common tool to get rid of snow, but some methods are more effective than others. In Tahoe, California, a major ski town, ski patrol crews head out before dawn with backpacks full of bombs, reading the snow and looking for spots vulnerable to avalanches. According to Jeff Goldstone, a ski patrol veteran, “On a full snow day,”–the day after a major snowstorm–“we throw 360 or so bombs.” Those bombs are designed to set off small avalanches which can be controlled and sculpted so as to prevent larger, more dangerous avalanches. Crazily enough, Goldstone also has a 106mm recoilless rifle–an _anti-tank rifle_–for the worst storms, but says the explosives are the most used weapons in his anti-snow arsenal. Of course, just because explosives can be useful in the hands of professionals doesn’t mean you or I should attempt to clear our driveways with homemade bombs. Just a few days ago, one Leo Powers of Abington, Massachusetts made that all-too easy mistake: He constructed bombs to rid his property of snow banks, in lieu of shoveling. Abington police arrested Powers for possession of incendiary devices after receiving word that he was using said bombs to blow up his snowbanks, “and had been for some time.” [Image credit: Angus]

Wherever there is a thankless chore humans don’t want to do, you’ll find a robot that can do the job instead. It’s a noble lineage, including luminaries like the Roomba, convoy-able automated cars, robots programmed to be happiest while working, and cycling robo-waiters, and this adorable guy, Yuki-taro, is a worthy addition. Yuki-taro is a high-tech automated snowplow, equipped with GPS, two video cameras (one in each “eye”), a scoop, and an internal snow compressor, all of which allows him to, well, eat snow and poop out snow bricks. And look cheerful while doing it.

Ah, the sugar beet. An offshoot of the noble beet family, the sugar beet provides about half of the sugar consumed in the States every year. (It’s also highly genetically engineered, but that’s a different story.) But it has more uses than mere sweetening: Extract from sugar beet juice is being used in snow-heavy cities like Chicago to treat roads before snowfall. Beet-extract-treated roads are much less likely to suffer ice buildup, and as a bonus, the substance is much more environmentally friendly than older treatments, like rock salt. Rock salt leaches into pavement, weakening it, and can also contaminate ground water and kill surrounding vegetation. But beet juice extract has no such damaging effect–plus, it’s actually a byproduct of the beet sugar processing, um, process, so it’s often extremely cheap to purchase.

Snowblowers are great, but in environments with serious business snow, like Muskoka, Ontario and Norway, a little handheld or pushcart version just won’t cut it. Enter the two most bonkers snowblowers we’ve ever seen. The first, is a homemade, V8-powered, 412-horsepower Canadian beast, capable of spitting snow over 100 feet away. It’s equipped with treads rather than wheels, so it can both handle the 800-plus-pound machine and spin in place for more control. This new champ, which debuted this winter, comes from Øveraasen in Norway. It features a 2,000-horsepower engine and can clear 10,000 pounds of snow per hour–an industrial-sized snow removal monster. It’s designed for airports rather than your driveway, no matter how big you think your driveway is, but we wouldn’t be surprised if it really was the world’s biggest snowblower. Don’t forget to check out the video!

Crowdsourcing works well for solving road problems in fair weather, so why not in foul? The National Weather Service, along with car manufacturers and the U.S. Department of Transportation, are working on ways to use our inherent desire to bitch about weather for the collective good. The Twitter Storm Report has already launched–it gathers information like location along with your tweeted complaints about the amateurish plowing in your neighborhood, and makes it available to those who can fix the problem. In the future, these services should be able to tap into even more information, including data from your car like barometric pressure and temperature.

In Sweden, one of those weird countries that care about high-speed rail (not for us!), a harsher-than-usual winter eliminated the effectiveness of salting, their usual snow-fighting method. When the temperature dips below around 0 degrees F, salted snow still remains frozen–a major problem for Sweden’s rail lines. The country’s modern, lightweight, efficient trains may be great in fair weather, but in a rough winter like this one, they just wouldn’t cut it. So Sweden looked backwards. Instead of using modern trains, Swedish rail authorities reached back into their antique train stockyards, using heavy-duty, decades-old trains with the weight and muscle to power through the snow. Interestingly, these vintage trains were actually on display in the Swedish Railway Museum before being deployed this winter, and Henrik Reuterdahl of the museum notes that “These [trains] are made of very stern stuff.”

Sometimes, doing the right thing isn’t really the right thing to do, if you catch our drift. (Snow drift! Pun!) In Seattle, the snow removal authorities have opted for environmentally friendly techniques, which comes from a good impulse. After all, the use of salt can contaminate ground water, cause harm to local vegetation, and ruin roads, and instead use sand and rubber plows to best suit their city’s ethos. Unfortunately, Seattle also seems just terrible at snow removal. They don’t really attempt to remove the snow, instead packing it down into a state that, in theory, should be drivable for vehicles with all- or four-wheel drive. Of course, the local police cars are rear-wheel drive, and police officers have had to park their cars at the bottom of hills and walk up to where they’re needed. The plows use rubber-tipped blades so as to avoid tearing up the roads, but those blades also fail to scrape the ice off the pavement, leaving them slick and dangerous. Sometimes, good intentions just aren’t enough. You need explosives or dangerous chemicals.

For light snows, it’s often overkill to bust out the snowblower or anti-snow chemicals, but that doesn’t mean you should be stuck with (shudder) ordinary snow shovels. Craig Smith wrote in to MAKE about his custom-made dual-bike tricycle plow, a chimaera of two bicycles and a bungeed plow that allows him to literally cycle the snow away. Though Craig notes that it’s “totally useless with larger snow falls,” it’s still a pretty great way to plow–provided you live somewhere flat to avoid an ultra-embarrassing low-speed ice-cycle accident.

Back in 1922, PopSci was already trying to figure out new ways to get rid of the natural frozen precipitation that both falls and causes chaos in New York City every single year. In our 100th issue, we were calling for a replacement of “a hastily recruited force of ill-clad and inefficient men” by machines. That totally happened! Unfortunately, the wedge-shaped snow compressor pictured here did not. The wedge you see there was actually a conveyor belt which would bring the snow up and into a compressor, which would smush it into small blocks of ice. Those blocks would in turn by picked up and removed by a separate truck. Not too different from the snow-pooping robot earlier in this gallery, really, except without the GPS sensors, dual video cameras, and adorable expression.

Listen up, cows, cars, and pseudo-academic skeptics: As annoyed by snow as we often are (especially those of us in perpetually unplowed Brooklyn neighborhoods), we’re not sure your method of wholesale accidental geoengineering is necessarily the shrewdest course of action. I mean, sure, it’ll be effective eventually, but let’s be honest, guys (and animals and inanimate objects and whatever Bjorn Lomborg is): There are definitely some downsides. For one, it’s causing unstable extremes of temperature, with brutal summers and harsh winters–so in the short term, and we know you love the short term, we’ll just get more snow. In the long term, there’s that whole polar melting and mass extinction and rising sea levels and lung-raping smog (pictured here in the skies above China) and your basic end-of-the-world scenario as a distinct possibility, which I think we can agree is something that should probably be avoided if possible.