Listen to the soothing sounds of a snacking stingray 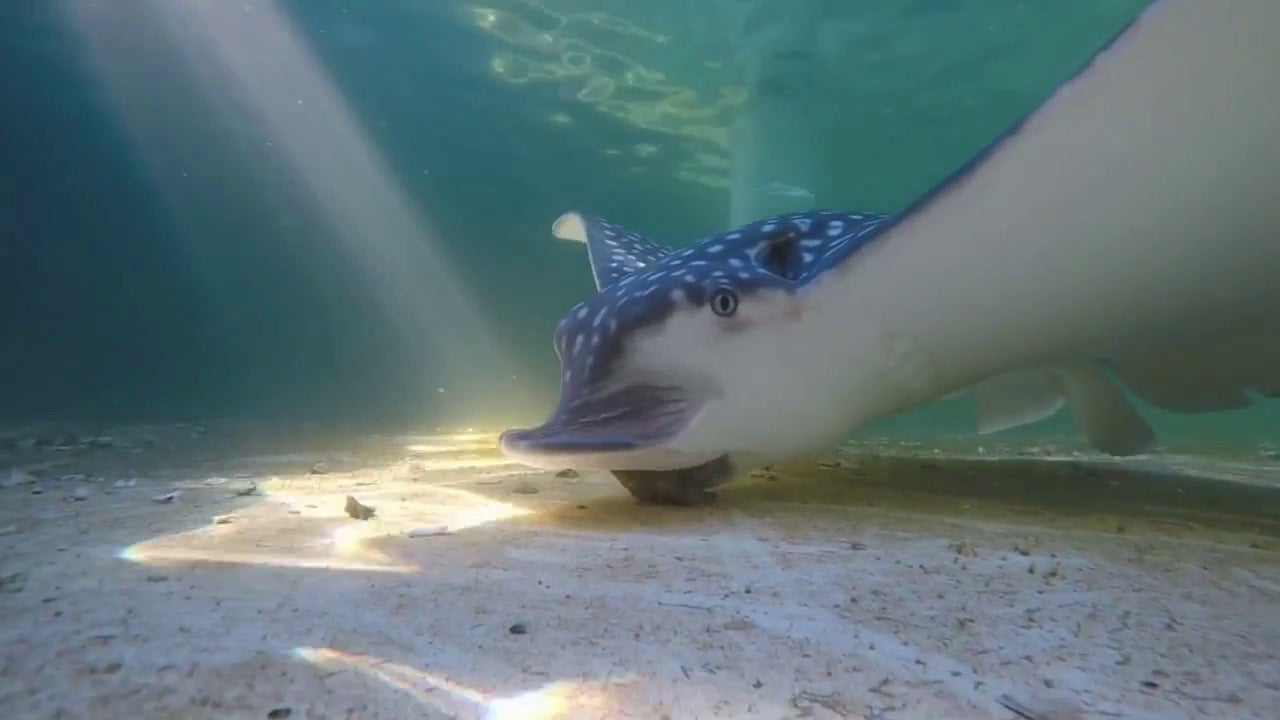 Absurd as it sounds, this video of a stingray snacking on shellfish may be the most soothing scene that’s floated across our screens this year.

But for the marine biologists who captured the recording, the listening experience is more than just an ASMR thrill. Shark and ray researchers from Florida Atlantic University used a battery-powered camera with a hydrophone (the underwater equivalent of a microphone) to eavesdrop on captive spotted eagle rays. Their goal was to see if they could infer how the flat-toothed predators crushed their prey without disturbing their dinner time.

By measuring the frequencies of the pops, cracks, and crunches in the clips, the team correctly guessed the rays’ meal, which included a menu of hard clams, banded tulip snails, and six other mollusk species, in more than 400 feeding events. They also gauged the intensity of shell fractures from the sounds to determine their unique method of munching, says Catherine Lamboy, an author on the study, which came out in the Journal of Experimental Marine Biology and Ecology earlier this month. With their fused dental plates, the predators had little trouble snapping the shellfish to get to the meaty insides. But the eight-foot-long rays didn’t always get it on the first try. “Sometimes they’d put the mollusk in their mouth the wrong way and then have to spit it out,” Lamboy explains.

The biggest takeaway from the research, however, was less about the hungry sea creatures and more about the underwater recorders. As Lamboy and her colleagues wrote in their paper, the success of their experiment shows that acoustic monitoring could play a hefty role in solving looming marine mysteries, like that of the dramatic disappearance of many shark and ray species. “The technology lets us gather knowledge on predators without dragging people, noise pollution, and tons of plastic equipment into the ocean,” Lamboy says. “This is both critical in preserving ecosystems and limiting our influence on animal movements and behaviors as we study them.”

But as Lamboy points out, recording wildlife in the wide open ocean won’t be as seamless as doing it in a sand-bottomed tank. Conditions at sea are never constant: The slightest tweaks in pressure, temperature, and salinity can change how sound travels through the water. There’s also the issue of the cost of pricey equipment like the Cyclops camera system used in the study and damage from the wet, salty elements.

[Related: Was megalodon a real-life monster or a myth?]

Still, the benefits of a hands-off approach seems to outweigh the technological trickiness. Lamboy can see hydrophones coming in handy to study how sharks (her main research group) “hear” and hunt their prey. She’d also like for all the recordings to end up in some sort of digital library, so that whale, fish, and mollusk scientists can come together to create a big-picture soundscape of the ocean. “We can use it to understand the anthropogenic effect on our planet’s waters,” she says. “But we can also enjoy the experience while we’re at it.”