Carrots were once a crucial tool in anti-Nazi propaganda

And they don’t actually improve your eyesight. 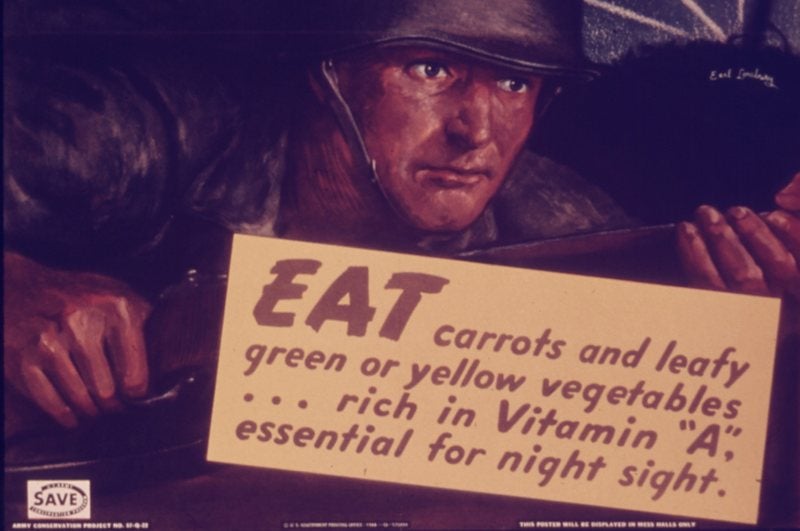 That doesn't mean you shouldn't eat them. Public Domain
SHARE

This week’s episode features special guest Rose Eveleth, host of the hit science podcast Flash Forward. You can learn more about her fact—featuring the story of a Soviet scientist who sought to permanently banish night using space mirrors—in her recent episode on a world without darkness.

FACT: During World War II, carrots were involved in a propaganda scheme to confuse Nazis

Many of us grew up being told to eat carrots for the sake of our eyesight. Some teachers and parents may have gone so far as to suggest that eating enough servings of the vegetable could keep us from needing glasses and help us see in the dark. As wonderful as that sounds, however, the connection between carrots and eye health mostly comes down to wartime marketing.

This week’s tale takes us back to 1940. The world was currently in the midst of World War II and Nazi Germany had started what became known as The Blitz: a strategic attack on the United Kingdom in which Hitler’s military would bomb England under cover of darkness. One bout of these nighttime strikes went on for 57 consecutive days. To make it harder for Nazi air raiders to strategically drop these bombs, the British government initiated nighttime blackouts in London and other parts of the country. Once dusk came, they closed businesses and instructed residents to shut off their lights and stay put.

Overall, the strategy was a success. But living in darkness was hard to get used to. That’s where carrots came in, thanks to some quick thinking from the British Ministry of Agriculture. On December 22, 1940, the organization released some dubious health advice to its citizens: “If we included a sufficient quantity of carrots in our diet,” the statement read, “we should overcome the fairly prevalent malady of blackout blindness.”

Carrots are indeed high in vitamins that are crucial to maintaining eye health. But unless you’re suffering from an ocular condition due to a marked deficiency in those nutrients, no quantity of veggies will actually improve your vision. None of the carrot-centric recipes published by the Ministry of Agriculture would actually make it easier to see when the city went into blackout mode.

But the British government had an ulterior motive in promoting widespread carrot consumption. Their campaign had less to do with the potential health benefits of the root vegetable and more to do with confusing the German military—and concealing a secret technological advantage. Listen to this week’s episode to find out more about this carrot conspiracy.

Moths have been trying to avoid getting eaten by bats for nearly 65 million years, which has led them to evolve to some intriguing anti-echolocation innovations. Researchers identified one such adaptation in a 2009 study, where they proved that a species of tiger moth called Bertholdia trigona was capable of literally jamming bat signals. Like many other moths, this species produces a clicking sound that turns predators off. But while many species seem to simply annoy bats with their clicks—or use the noises as a way to make sure bats recognize them and remember how bad their ilk taste—Bertholdia trigona manages to neutralize the sounds of a bat’s echolocation.

A bat locates prey by letting out super-loud, ultrasonic sounds that bounce off of solid objects and come echoing back. The bat then uses the speed and trajectory of the returning noise to “see” where dinner is lurking. But the tiger moths featured in the 2009 study use external organs called tymbals to produce 4,500 clicks per second, which appears to interfere with the bats’ ability to process returning echoes. The researchers found that this jamming technique lowered bats’ hunting success by ten-fold, making it the most successful anti-bat adaptation ever studied.

But it gets even weirder: In 2013 researchers found that another sort of moth has a similar sonar-jamming trick—only instead of tymbals on its thorax, it just uses its genitals to make noise. Sometimes you’ve just got to work with what you have! Find out more about the hawkmoth’s NSFW defense mechanism by listening to this week’s episode.