And 5 reasons to fear them 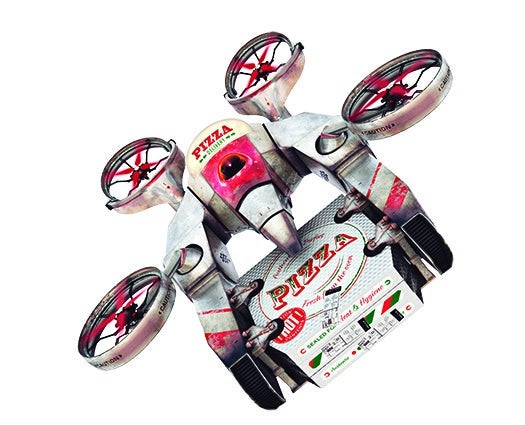 We know what you’re thinking: love drones? Those ominous, free-floating, sometimes unseen killers that have walked our nation out onto some perilously thin ice, geopolitically and ethically? Even the word itself is loaded. No one can agree on what a drone is, exactly, or whether they should be referred to as drones at all. Turns out we don’t just think about drones. We have feelings about drones.

But yes, there is plenty to love beyond the headlines about the Middle East. Once the Federal Aviation Administration (FAA) establishes airspace rules, which is likely to happen next year, the drone industry could fuel a decade-long, $82-billion economic boom, according to a study done by the industry’s leading trade group. Already, one analyst estimates the global market for small unmanned aerial vehicles (UAVs) at $250 million to $300 million. The truth is, we’re witnessing a Kitty Hawk moment—the start of an era in which drones will change the world and the way we live in it. They’ve saved lives overseas; at home, they will make our cities and grids smarter, keep people safer, and help save our planet. And, as you’ll see on these pages, they can be fun, too.

In the past year, unmanned drones have delivered textbooks, medical supplies, pizza, burritos, and a nearly full case of cold beer. The FAA grounded such commercial flights until new regulations are in place, but that hasn’t stopped companies like Amazon from trying to tackle the technical and logistical questions associated with delivery by flying robot.

Once the skies are (inevitably) cleared for such activity, this trend will go far beyond flying a Domino’s across town. The start-up Matternet is designing a node-based delivery system to extend drones’ range. Its quadcopters will land at stations to either swap out spent batteries for new ones or relay payloads to fully charged drones. Later this year, Matternet plans to test the system by delivering medical supplies to remote regions of Africa.

For the amateur photographers among us—and let’s face it, in this age of smartphones, that’s most of us—drones can help us capture high-flying imagery worth a thousand likes. The aerial photos look so good, real estate agents now use them to show off properties for sale.

3) They will democratize the Internet

More than half the global population lacks Internet access, but with its purchase of Titan Aerospace in April, Google could bring millions more online. According to an early report, once the tech is dialed in, Titan’s 164-foot-wide solar-powered craft will soar at 65,000 feet, bringing new parts of the world online.

In Japan, 2,300 aircraft, like the Yamaha RMAX, spray about 85 percent of crops. By 2025, annual sales of UAV technology for precision agriculture could hit 160,000 units, making up about 80 percent of the commercial-drone market.

5) Martha Stewart swears by them

The lifestyle maven raved in Martha Stewart Living about her Parrot AR.Drone 2.0 Power Edition: “I operate it from my iPad and can send it out over the farm—I love getting overhead shots of the garden and livestock.”

6) They can fight pirates

Breathe easy, Captain Phillips. The U.S. military’s efforts to deter and disrupt attacks off the Horn of Africa and in the Indian Ocean include surveillance drones. The craft can spot pirate camps and allow officials to warn vessels when pirates appear to be setting off.

7) They can fight poachers

Rangers at a Kenyan wildlife reserve are planning a pilot project with two drones to ward off elephant and rhino poachers. If it’s successful, and the government lifts a ban on UAVs, the next stop would be drone patrols in 23 Kenyan national parks.

8) They can fight unemployment

A 2013 study conducted by a UAV industry group said FAA approval of commercial drones could create 100,000 jobs by 2025. To prepare for the workforce, matriculate at the University of North Dakota, whose aerospace school offers a major in drone operations. 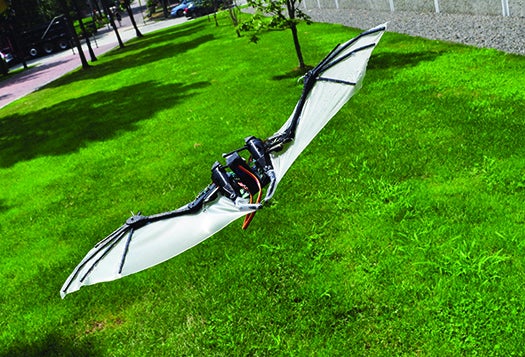 The BaTboT contains six joints powered by a servomotor.

9) They can be eerily lifelike

The newest UAVs don’t just help monitor and protect animals—they can mimic insects, birds, and bats, too. Robotics researcher Julian Colorado built a BaTboT; its mechanical wings fold and flap like the mammal it’s modeled after. In mirroring the fluttering creature during simulations and other tests, some of which took place in a wind tunnel, Colorado’s drone could shed light on how bats cartwheel in midair, turn 180 degrees without falling, and avoid collisions.

10) They save lives in combat zones

A campaign ad from a Montana congressional candidate shows him shooting down a government drone that was spying on him. We see it going the other way: congressmen sending drones to Washington to cast their votes.

12) They can find elusive parking spots

Renault’s Kwid Concept car, unveiled at the 2014 Delhi Auto Show, comes equipped with an onboard drone. The driver can launch the Flying Companion (a quadrotor) to locate a park- ing space before anyone else sees it or scout a route through the gridlock ahead.

13) They can find stranded hikers

Australians are pushing the state of the art in rescue-ready drones by holding a biannual competition worthy of its own reality show. Teams compete to find and deliver emergency supplies to a lost backpacker—in this case, a dummy named Outback Joe.

14) They can find holes in your defense

The University of California at Los Angeles football program uses Phantom drones to gain insights at practices. The craft can capture overhead perspectives that regular video cameras miss, illuminating flaws in spacing and hand and foot placement, among others.

A scientist at the Lamont-Doherty Earth Observatory at Columbia University rigged a drone to drop tiny buoys into the Arctic Ocean to keep tabs on temperature and salinity. Lasers and a hyper-spectral camera on board the UAV also help track the energy fluxes involved in climate change.

16) They’re monitoring our planet for wildfires

In order to learn more about the dynamics of big blazes, U.S. Forest Service researchers are flying drones over controlled burns. Wind data and infrared video captured from above can show how underbrush, terrain, and weather patterns affect the spread of a fire.

17) They’re monitoring our planet for tornadoes.

Bringing the film Twister to real life, researchers are building drones they can fly inside tornadoes. The UAVs will be equipped with sensors to collect data, which may help meteorologists better predict when the funnels will touch down.

19) They can turn us all into Woodward and Bernstein

When an EF4 tornado tore through two small Arkansas towns last April, killing 16 people, the headlines included the story of a small, camera-equipped UAV that provided powerful, otherwise-inaccessible footage. Brian Emfinger, a videographer and storm chaser, acquired it using the kind of small, inexpensive craft now capable of streaming photographs and video to the ground in real time—to all of us. Similar instances of grassroots, drone-captured images occurred during the massive flooding in Colorado last fall and a recent building collapse in New York City.

“There’s another layer of story out there that we just haven’t thought of yet, that this kind of aerial ubiquity will open up,” says Matt Waite, founder of the University of Nebraska-Lincoln’s Drone Journalism Lab. Drones aren’t just changing the way we tell stories—they’re changing the stories we tell.

Sure, you can buy a plug-and-play drone, but it’s more fun to own one you can hack. Bitcraze made its diminutive nanocopter, the Crazyflie ($149), an open-source platform. Mount a key-chain camera to it, turn it into a flying LED bulb, or dream up some app no one has thought of yet. Game on.

The official tally at this point: Flying-Cam SARAH 3.0, two Oscars; Leonardo DiCaprio, zero. The helicopter drone represents the third generation of aerial cameras credited with more than 80 feature films, including Skyfall and Transformers: Age of Extinction. The SARAH can capture single takes that begin at ground level and rise to 400 feet (the limit per FAA regulations); it also follows autopilot routes to within 2.5 centimeters and can hover in winds blowing more than 30 miles per hour. An onboard digital camera tilts 180 degrees up and down and can rotate 360 degrees in midair. As Haik Gazarian, Flying-Cam’s director of operations, puts it: “We are at the beginning of an era of being able to produce complex camera moves that could never be achieved before.”

22) Indiana Jones would trade his bull whip for one

Archaeologists have long known that aerial infrared images can reveal buried antiquities, but the only way to get them was by helicoptor or satellite, which is too expensive. Two scientists in New Mexico recently programmed a CineStar 8 drone with a thermal-imaging camera—and found a 1,000-year-old puebloan community, including never-before-seen buildings, that would have taken a decade to find by traditional means.

23) Kids love them—and learn from them too

Children with autism struggle to understand different perspectives. Last year, as part of a program called Taking Autism to the Sky, kids worked together to assemble JMT Hexa-coptors, fly them, and use them to make movies. Exploring a site on the ground, and then again overhead with a drone, reinforced that something could look one way at eye level and another way from the sky—a lesson that can be extrapolated to different facets of learning.

Drones don’t just fly; They also drive, jog, and swim. Self-driving Priuses already roam the highways, and autonomous gliders patrol the oceans, mapping seabeds and following sharks. Treaded ground bots are probing and documenting tunnels along the U.S.-Mexico border through which people smuggle drugs and try to enter the United States illegally—all without relying on human control. They’re a permanent, highly efficient, and valuable part of our world—and although they may not be part of our daily lives yet, they will be soon enough.

Great for surfers, skateboarders, aspiring YouTube sensations, and anyone else who craves their own paparazzi.

…And 5 Reasons to Fear Them 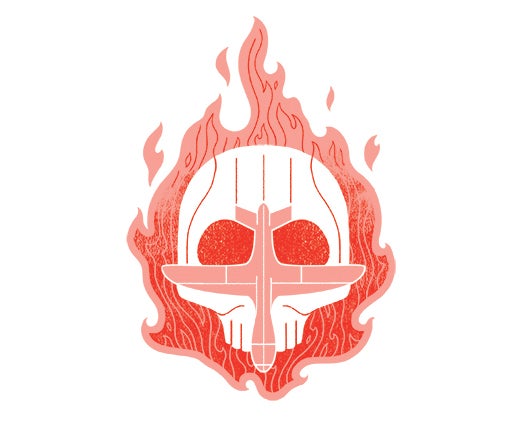 In the wrong hands, drones could be deployed in unintended—and sinister—ways. Here’s why we shouldn’t rush headlong into this new age without careful deliberation about how and where drones can be used. —peter singer

Remotely controlled vehicles keep human operators out of harm’s way. This, of course, means that world leaders can be tempted to engage in a kind of combat with almost no on-the-ground risks—creating a new kind of geopolitical calculus that everyone from President Obama to George R.R. Martin, the author of Game of Thrones, has puzzled over.

Drones have been a powerful tool in the battle against terrorism; they are responsible for the deaths of 58 high-ranking members of the Taliban and al-Qaeda and its affiliates in Pakistan alone. But drone strikes have also killed civilians and fueled a wellspring of anger. The would-be Times Square bomber became a terrorist out of his rage over drone strikes overseas.

Hobbyists love quadcopters and their ilk because they’re easy to use, but that quality also makes them appealing to people with undesirable motives. Terrorists have started to use the technology as cheap aerial improvised explosive devices (IEDs), while criminals use them to smuggle contraband over prison walls and across internatinal borders.

More flying objects with less-experienced human operators (or even no human pilot at all) has created a new category of personal risk. In April, a drone fell out of the sky and hit a triathlete at a race in Australia; a month later, an American Airlines jet nearly hit an unmanned aircraft about 2,300 feet over Florida—an incident the FAA is now investigating.

In a world where drone operators will include police and paparazzi, it will be hard to escape from probing eyes in the sky. California lawmakers are likely to pass a measure this summer that would curb drone-based surveillance—a law pointedly created to deter overzealous celebrity-chasing photographers.