Startup CyPhy Shows Off New Drone That Can Slip Through Windows

The startup launched by an iRobot co-founder is focused on making robots simple again. 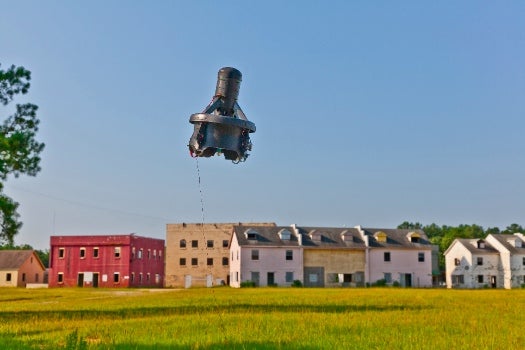 Earlier this week news crossed our radar that iRobot co-founder Helen Greiner’s new robotics startup was coming out of “stealth mode” with two new unmanned aerial robots, one a quadrotor and the other a ducted-fan design. Now the videos are emerging. CyPhy Works’ EASE (for Extreme Access System for Entry) has been undergoing flight tests at Ft. Benning in Georgia, navigating urban obstacles and interior spaces.

CyPhy’s basic operating philosophy is that sophisticated robots are great, but that there is a huge untapped space for simpler robots that can get the job done without too much complexity getting in the way. EASE is a good example of this. It is tethered to a ground station by a fishing-line-thin wire that is fed out of the robot by an onboard spooler. That may sound like it limits range, and it does. But it also means EASE is powered from the ground. It doesn’t have to carry a weighty battery and it can stay aloft indefinitely. And should the cable get cut, EASE won’t fall out of the sky. An onboard backup battery can see it safely to the ground.

Being tethered also means that EASE can offload its sensor processing, adding to its simplicity. The robot itself is optimized for entering man-made structures through doors and windows, but all the digital mapping and such that one might want to do once inside is handled off-vehicle. So basically, EASE is just a dumb flying robot. Which is pretty smart.