The Coyote swarming drone can deploy for aerial warfare—or hurricanes

The Navy wants them to be able to launch out of robotic vessels and then become a weapon if needed. 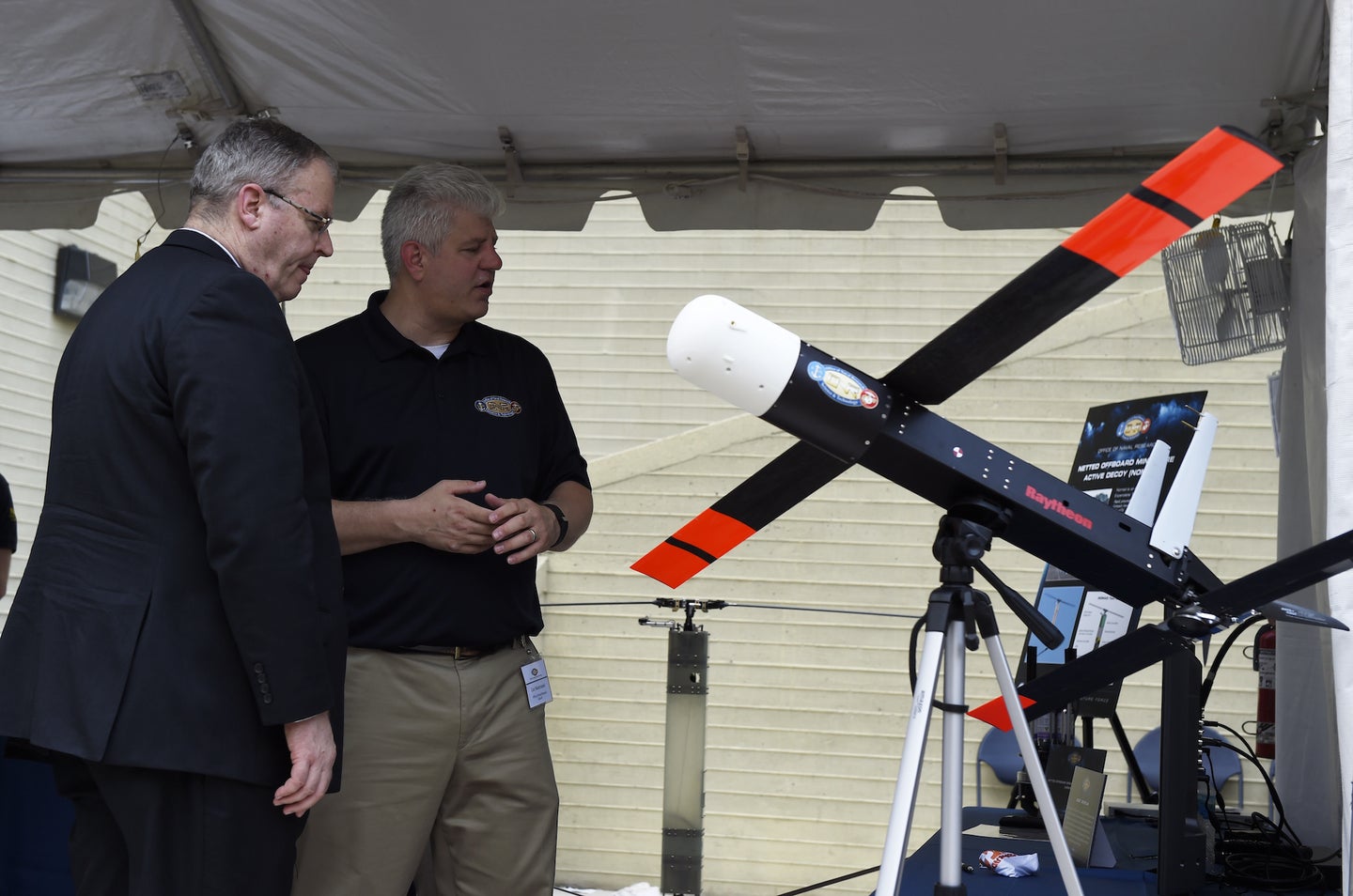 Before this drone was called Coyote, it was known as LOCUST, seen here in 2016. John F. Williams / US Navy
SHARE

A drone emerges from a missile tube like a cicada rocketing out of a cocoon. Once in air, its wings spring into place, its tail rudders fold up, and it powers forward, like a missile impersonating a plane. This is the Coyote drone, and on February 26th, the US Navy announced a contract worth almost $33 million to turn some of them into an autonomous swarming weapon. For maximum effect, the Pentagon wants to make sure these swarms can launch from robot boats or submarines.

Made by defense giant Raytheon, the Coyote fits broadly into the family of weapons known as “loitering munitions.” Somewhere between missiles and drones, loitering munitions are as close as an airplane gets to being a landmine. With drone-style sensors and a human controller, this type of weapon can stay airborne for extended periods of time while looking for a target. The largest loitering munitions can even fly, look for a target, and then land on a runway if there are no such enemies found, ready to fly and fight again another day

The Coyote is a small machine, built for short, hour-long flights. While that’s hardly the endurance of, say, a high-flying Reaper, it’s still a much longer stretch of time between being fired and hitting a target than what happens with missiles, which head for the impact area the moment they are launched.

Raytheon boasts that Coyote drones were originally designed to be low-cost and expendable, the kind of machine that can be used once and replaced, rather than maintained. Before Coyote was called Coyote, it was “LOCUST,” for “Low-Cost UAV Swarming Technology,” and the Office of Naval Research tested launching a swarm of the vehicles from tubes back in 2015.

[Related: The Navy plans to launch swarms of drones from tubes ]

Swarming synchronizes drones that work together to fly a similar route or perform a similar task, under the command of a single pilot. The ability of the drones to coordinate autonomously in flight, even while flying to human-set coordinates, frees up a lot of the otherwise cognitively demanding work of piloting.

Sending several drones on the same mission reduces the need for any single drone to succeed. So long as some crafts complete the task, the whole mission is a success, especially if those that failed were built to be disposable in the first place.

The Coyote’s expendable nature has already made it useful in some real-world scenarios. NOAA hurled them into Hurricane Edouard in 2014. The drones, which can be parachuted into the sky and will fly as far as 50 miles from where they are released, collected data about wind speed, atmospheric pressure, temperature and moisture until they were destroyed.

This latest contract will develop Coyote drones into weapons for use against far more mundane targets.

The contract award notes that the drones will be used to “provide intelligence, surveillance and reconnaissance (ISR) and precision strike capability from maritime platforms.” In short, they will always be scouting for enemies but will only sometimes act as weapons.

As for targets, the Army already experimented with Coyote drones as a counter-drone weapon—robots designed to crash and explode into other uncrewed vehicles mid-air. Paired with a special radar system, Coyotes used this way are part of an anti-drone system called “Howler.”

Because the Coyote drones can transmit and receive information in flight, it seems a natural fit for use with existing sensor and detection systems, from radar stations on the ground to the sensors already deployed on ships. Depending on the payload it carries, a Coyote could send visual or infrared video of objects on the surface of the ocean back to human commanders.

In their weaponized swarm formation, a human commander could then send many Coyotes to attack a hostile ship, with some drones providing better information about the target and others lingering to provide video proof that the attack was a success.

What is most remarkable about the new contract award isn’t just that the Navy wants to turn a cheap drone into a swarming weapon. It’s how the Navy sees the armed drones as a way to quickly acquire an “operational launch capability from unmanned surface vessels (USVs) and an unmanned underwater vessel (UUV),” or robot boats and robot submarines.

Taken altogether, the Coyote could become the default weapon of the outermost perimeter of fleet defense. With robot ships operating on the edges of a flotilla, Coyote launches would scout the way ahead, and in the event of danger, those same scouts could become a swarm of violent energy, robots launched from robots, built to explode to keep the humans (hopefully controlling things remotely) safe from harm.