DARPA’s Gremlin drones could be reloaded while airborne

Catching a drone in the sky with another aircraft is tricky, but the military is trying again this fall. 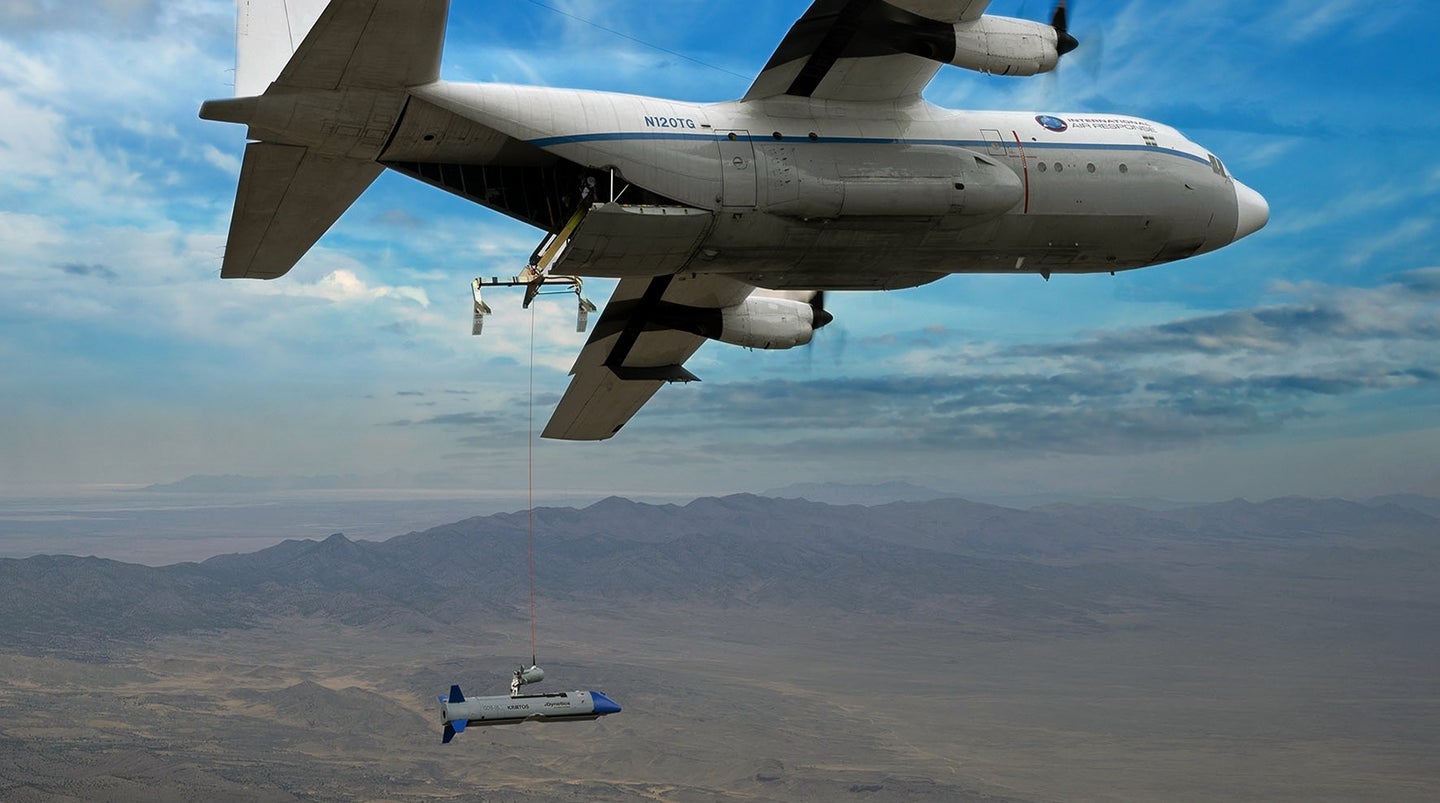 A plane is limited by what it can carry, and how far it can carry it. This is especially true of small aircraft. DARPA’s Gremlins program is one answer to this challenge: by launching small drones from airborne carriers, swarms can piggyback on the range of their flying transports. In an upcoming series of tests, announced by an Air Force general last week and set to take place around October or November, the drones will be launched and then re-armed in flight. Or at least that’s the goal.

Right now, traditional aircraft take off from runways and, after some time traveling to their destination, have a set amount of time they can fly over an area before they have to return and land. But if any part of the target can move, be it people, tanks, or anything that can fit on a truck, it’s better to have aircraft that can adapt and pursue it from the sky.

Long-endurance drones and high-end fighters can do this reasonably well—drones like the Reaper for many hours, fighters like an F-15 at greater speed and with more bombs. Yet those aircraft are expensive to fly and operate. Reapers require human pilots at remote consoles for the entire time they are in operation. Over battlefields where there is little risk of anti-air weapons, these flights can operate with impunity, but the United States does not expect all future wars to resemble the same uncontested skies as seen over Afghanistan and Iraq.

DARPA’s Gremlins program, in the works for years, is an attempt to meet all of these challenges by building a kind of plane that flies for less time, at less distance, and at a much lower cost. To still work in combat, for everything from scouting to dropping bombs on targets, the Gremlins will be carried into battle in other aircraft, launched in the sky, and then fight as a swarm.

Swarming allows the drones to disperse their functions across several smaller bodies. Not every Gremlin needs to have the same sensor if the drones can share the important information in near-instantaneous time. By dispersing the functions of an aircraft across many small bodies, it makes the work of anti-aircraft weapons harder. Shoot down a Reaper, and that knocks out a camera system, a communications relay, and several weapons all at once. Shoot down a fighter like the F-35, and that’s a human life as well as tens of millions of dollars of equipment. Destroy a Gremlin, and the rest of its swarm mates can still carry on their mission as designed.

The company leading the Gremlins program is Dynetics, with dronemaker Kratos working on the actual airframe. Steve Fendley, president of Kratos Unmanned Systems Division, told Military.com that “they now want to rearm the Gremlins in air and redeploy [them], so they won’t just do one mission now.”

At sea, aircraft carriers are as much about rearming and refueling aircraft as they are about launching them. What makes a carrier so effective as an entity is that it can not just launch planes at an enemy, but do so repeatedly, sustaining that fight over time.

With Gremlins able to land on airborne carriers, like C-130 transport planes, the ability to take on new weapons could keep those same drones fighting for longer. If it works, it lets the drones shift all the heavy lifting to the transport, while the Gremlins swarm flies for every mission equipped with only what it needs immediately.

Making Gremlins work will require automating a tremendous amount of flying, from launch to attack to keeping formation with other drones. The planned returns for aerial landing include the drone latching on to a boom trailing beyond its mothership, much like for in-air refueling, only this will entail not just refueling but possibly being lifted inside the craft and rearmed.

In the last round of trials for Gremlins, flown in October 2020, the Gremlins came within 50 feet of successfully docking mid-air. For any of the program to deliver on the promised results, it will need to cut that 50-foot error to zero.

If that can be done, the military will have an answer to expensive anti-air weapons, finally bending the cost curve away from pricey planes to cheaper missiles. The Air Force prefers “attritable” to “expendable,” but what makes a swarm work is that parts of it can be lost and the mission will still be completed. It’s a powerful answer to new attacks, and one that adds lots of reach and punch to aircraft that would otherwise be too low or unprotected to get near the fight.

Watch a concept video of the Gremlins below: