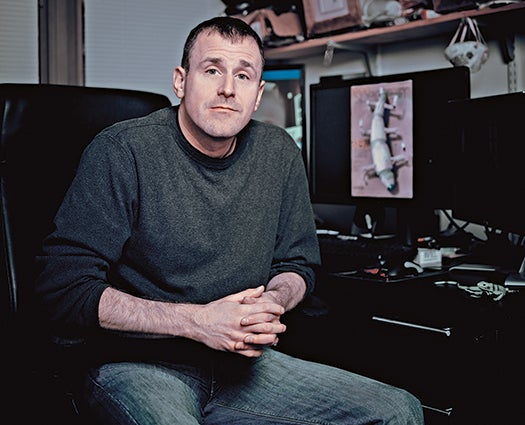 Daniel Goldman spends his days working with venomous rattlesnakes, baby sea turtles, and a dozen other types of animals. But he isn’t a zookeeper, or even a biologist. He’s a physicist, studying locomotion at Georgia Tech. In order to test his hypotheses, he builds robots that mimic the ways animals move. Jealous yet?

Popular Science: Why do you have so many sandboxes?

Daniel Goldman: No one has ever studied the complexities of a sidewinder rattlesnake’s movement on sand, its natural substrate. In principle, you can understand how a hummingbird stays aloft or how a shark swims by solving fluid-dynamics equations. We don’t yet have fundamental equations for complex terrain—sand, leaf litter, tree bark. To figure that out, we built giant sandboxes that are equipped with high-speed cameras and can tilt to mimic dunes.

PS: Which animals are the hardest ones to work with?

DG: The rattlesnakes were a lucky break. You put them in a sandbox, and they just start sidewinding—the sideways slithering they do to cross sand. But most animals don’t do what you want. Ghost crabs, for example, are ridiculously fast. In the laboratory, you can get about 10 good trials out of them: They’ll run away from you down a track, where high-speed cameras record them. After that, they seem to decide they are no longer afraid and start trying to pinch you.

PS: Why do you build robots too?

DG: We want to figure out how animals move, but they’re too complicated to understand all at once. Robots let us systematically vary parameters, like the number of motors or the slickness of the skin, and see how movement changes. We can compare these observations to computer models and animals. I call it robophysics.

DG: They’re like children; how can I pick? I’ll say our sand-swimming robot, which is made of several servo-motors packed in a sleeve and wrapped in a Lycra swimsuit.

PS: How will these insights be used outside the lab?

DG: The locomotion lessons we learn can be fed back into more sophisticated robots. In the future, I think we’ll see robots with Watson-like smarts and squirrel-like mobility.