The new flying machine can take off and land from shorter runways. 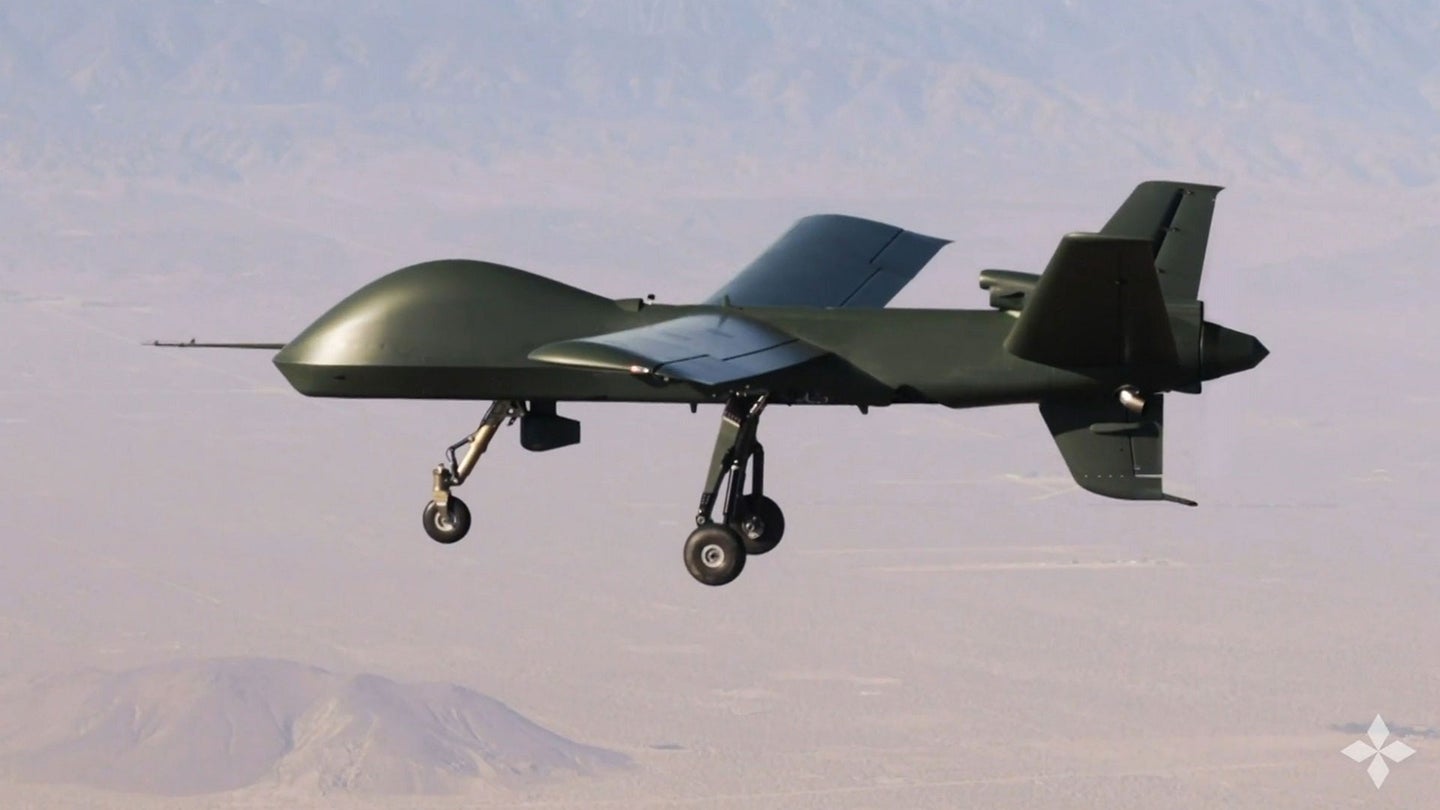 The Mojave is smaller than the Reaper and can take off from a shorter runway. General Atomics
SHARE

Earlier this month, General Atomics announced that its latest drone in the Predator family would be named Mojave. Part of a lineage that includes the Reaper and Gray Eagle, the Mojave is billed as a flying arsenal that is also made for rougher and more rugged environments than its predecessors.

What sets the Mojave apart, specifically, is that it’s designed outright as a short takeoff and landing plane, expanding the kinds of terrain it can operate from.

“We are providing the ground force with a long-endurance, armed overwatch UAS [unmanned aerial system] that can quickly reload weapons at austere sites, located close to the conflict zone,” General Atomics aeronautical systems CEO Linden Blue said in a release.

The Mojave comes 14 years after the Reaper entered service, and 27 years after the Predator first flew in 1994. (The Gray Eagle, flown by the Army, entered service in 2009, and operates as a better-armed Predator that works well alongside other Army vehicles). These drones, as a family, are hardly new machines—but it has been a long time since a new iteration on the design joined the military.

The Predator started life as an unarmed scout before it added the ability to launch weapons, but it was the dedicated Reaper, built to operate from those long runways with a full load of missiles that really defined the use of drones in the long War on Terror.

[Related: Watch a C-130 cargo plane grab a drone out of the sky]

“Air Force’s hunter-killer UAV now flying in Afghanistan,” is how the Air Force announced the use of Reapers in that country in May 2007. At the time, and for years afterwards, the US Air Force operated from bases across Afghanistan and Iraq, with combined miles and miles of runway.

This hunter-killer role is central to modern drones, and it is prominent in a request for information made by the Air Force last April. In this solicitation, the Air Force sought new sensors for Reapers and future drones.

“The Hunter-Killer mission set provides a unique capability of combined ISR and Strike attributes in a single platform fulfilling the highest demand of all Air Force assets through vast capacity,” reads the request. “As a critical component of the current MQ-9 weapon system, the [Electrooptical/Infrared] sensor’s capabilities are integral to the combined ISR and Strike mission.”

The rest of the request deals largely with the specifics of putting a new camera on a drone. Nestled in that request, as reported by The War Zone, is the desire that this new drone be “attritable or expendable, unlike the Reaper, as well as, or as an alternative to being survivable and reusable.”

It will also, as the launch announcement for the Mojave clearly states, be built for more dynamic war than the Reaper was, where bases are maintained for weeks rather than years as front lines shift. A short takeoff and landing (STOL) ability expands the number of airfields that a drone can fly from, and is a feature sought after when the drone still needs to fly even if traditional runways cannot be built or seized in time. A STOL drone could even possibly use rough roads and clearings.

The Mojave’s wingspan and length are both shorter than the Reaper’s, though its total payload capacity is reduced by only about 250 pounds. With only cameras, the Mojave can take off from a 400-foot runway, and even with a load of 12 hellfires (75 percent of its total capacity), it can still take off from just 1,000 feet. Reapers require at least 3,000 feet of runway, with an extra 1,000 foot margin of error on each side of that, limiting the drones to operation from runways nearly a mile long.

Endurance for the Mojave is listed at over 25 hours, which is close to the 27 hours of the Reaper maximum endurance, though it is not immediately clear how much the Mojave’s endurance is shortened when it carries its full loadout into action.

One use case, suggested in technical terms in the brochure for the Mojave, is transport near where it’s needed inside a C-130 cargo plane. With four people assembling, arming, and operating the drone, it could be airborne 90 minutes after it’s been unloaded from a C-130, and could then fly and fight for 8 hours with no weapons, or 3 hours with 12 hellfires on board.

It is still early in the Mojave’s development. What is clear from its design is that future drone wars will be fought from rougher airfields, and may need the flexibility of a smaller plane that can be a useful scout, a long-flying sentry, or a short-duration attack plane.

Most crucially, Mojaves are designed to fight alongside Reapers, using many of the same sensors and weapons. This is not a Reaper replacement—it’s a complimentary weapon, built to hunt and kill at the command of human operators.

Watch a video of the Mojave below: