The future of air combat is drones launching more drones

A Valkyrie just launched its own little UAV. 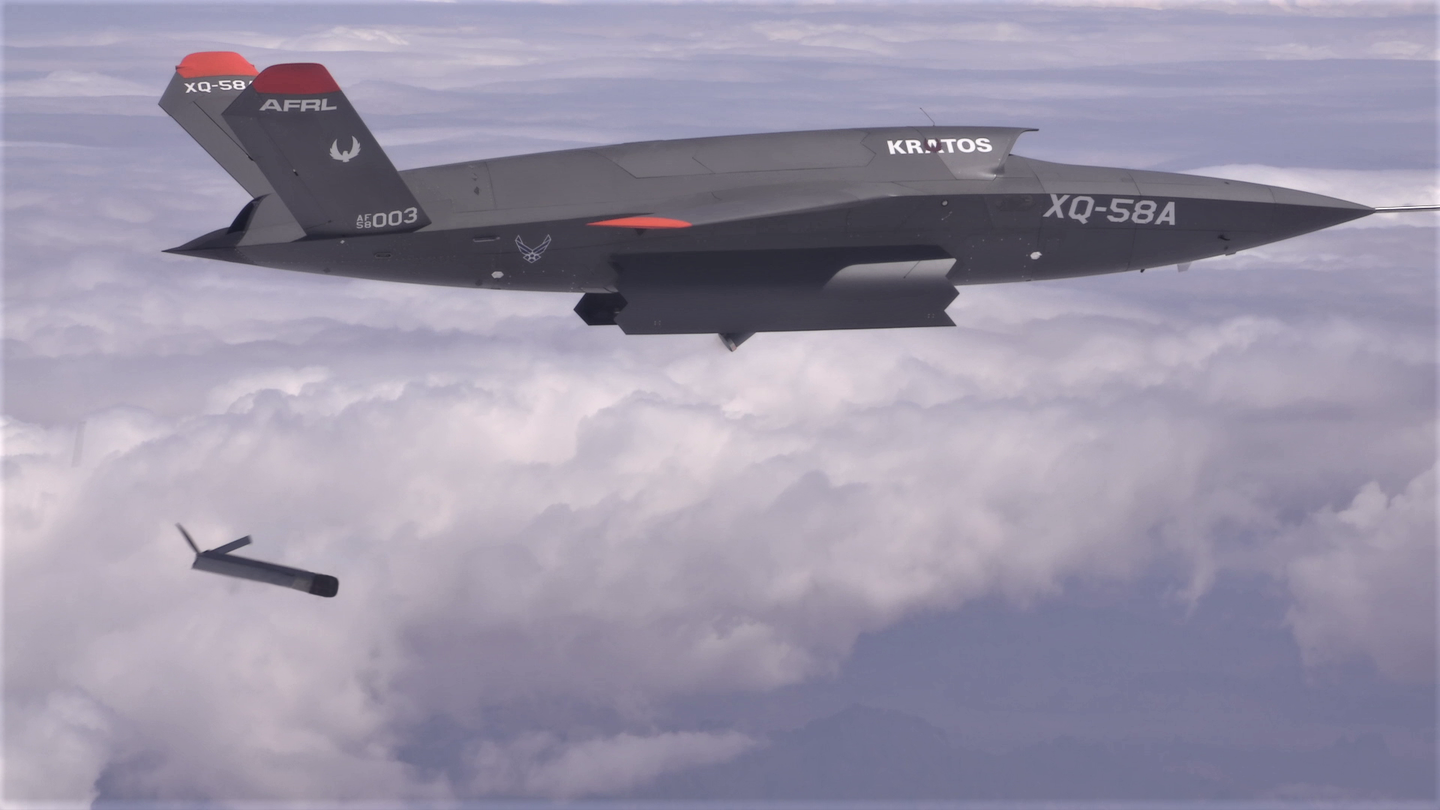 The Valkyrie drone drops its own drone. courtesy US Air Force
SHARE

On March 26, a windowless drone called the Valkyrie opened its weapon bay doors, the first time it had done so while airborne. Then, it released into the sky below not a bomb, but another, smaller drone, a scout launched into flight from its mid-air berth. Deployed from a mothership into flight, the drone-launched drone ushers in an era of machines sending other machines to fight battles for humans.

The XQ-58A Valkyrie drone, with a 28-feet length and 22-foot wingspan, was on its sixth test flight at the Yuma Proving Ground in Arizona. The Valkyrie has flown over the Sonoran desert around Yuma since 2019, it’s dark gray body stark against the sun-scorched sands below. The smaller drone, the payload released from the Valkyrie weapons bay, was an ALTIUS-600. Altogether, the package suggests that the next decade of drone warfare will involve more autonomous machines, working in concert, to ensure that Air Force pilots are only physically present when really needed.

The Valkyrie is part of the Pentagon’s search for a capable combat drone that can augment its existing wings of inhabited fighters. It is cheap in relative terms. Designed with a price at around $2 million, the Valkyrie is certainly pricey, but a tiny fraction the cost of an F-35A stealth fighter used by the Air Force.

Meanwhile, the ALTIUS resembles a Predator UAV in miniature, with an upside-down-V tail on its approximately 3-foot-long body. Its wings, 4 feet in either direction from the fuselage, unfold upon release, making it easy to launch from a tube, shove out of a helicopter, or, in this case, drop into flight from a bomb bay.  Like the plane-sized Predator, the ALTIUS has a pusher propeller for power, and features a rotating camera.

In flight, the ALTIUS cruises at 69 mph, though it’s capable of bursts as fast as 100 mph. At cruising speed, it can fly for over 4 hours, and at a range of 276 miles. That’s roughly the distance between Boston and Philadelphia. It is primarily a reconnaissance drone, but that camera pod on the nose can be swapped out and replaced. Alternative payloads include electronic warfare (jammers) and kinetic (explosives), turning the scout into a weapon ready to disable or destroy whatever it is pointed at.

Area-I, which makes the ALTIUS, also makes AI for the drone that allows one human to control multiple aircraft in flight. Previously, that control system allowed a passenger in a helicopter to control four ALTIUS drones at once. That sort of mostly autonomous operation is essential to make drones that launch drones work, as without it the burden of remote piloting becomes a tremendous amount of mentally taxing labor.

Having Valkyries, which deployed the ALTIUS, in fighter wings means that the Air Force can plan for more numbers when it sends vehicles on missions. These planes can fight over wider stretches of sky, hunt for hostile aircraft or targets on the ground, and generally support the human-piloted craft shepherding drones through the sky. Uncrewed aircraft like these could be robotic companions for inhabited fighter jets.

Kratos, the makers of Valkyrie, boasted in 2018 that the drone would have a maximum range of over 3,450 miles, though recent estimates have scaled that back by about 1,150. Launching a pair of ALTIUS scouts could expand that reach by hundreds of miles. It could also allow for a greater concentration of force, with multiple drone-launched drones converging on the same point, guiding precision weaponry or clearing a path for other attacks.

In an effort to ensure that the drones are viable into the future, both Valkyrie and ALTIUS can swap out part of their airframe for new components. This modularity ensures that, so long as the airframe is effective, it will be easy to add new sensors, payloads, and other hardware.

[Related: This Airbus prototype could deploy drones from cargo planes]

This general strategy is part of a broader doctrinal change, incorporating uninhabited craft alongside crewed vehicles, to adapt the force for the expected aerial battlefields of tomorrow. The Valkyrie is also a crucial part of the military’s Skyborg combat drone program, and could pave the way for future autonomous aircraft developments.

Central to all of this is the role software will play in coordinating the drones and humans, the drones and each other, and all of this elaborate network of flying robots and people into an order of battle. In order to make the ALTIUS launch from the Valkyrie work, the Air Force Research Lab, together with the respective drone makers, built a special carriage and custom code to make it all work together.

Deploying drones that can launch drones is the culmination of nearly a century of dreams about launching planes from other planes. Without the need to accommodate awkward human passengers, planes launching planes is much easier. What remains to be seen is how, exactly, the Air Force plans to turn this to war, and if the drone-launched drones have any advantage over drone-launched missiles.