An app that alerts users to drone strikes around the world keeps getting denied by the Apple's App Store reviewers, and no one can explain why 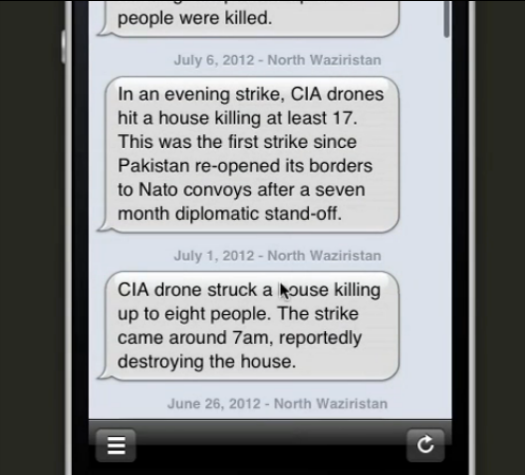 We’ve covered the technology aspects of the ongoing drone wars thoroughly here at PopSci. The geopolitical and legal ramifications have been fodder for an endlessly cycling debate in the blogosphere. Esquire’s Tom Junod recently termed it the “Lethal Presidency” while examining the moral ramifications. The bottom line is, the U.S. is engaged in several shadow wars around the globe in which unmanned aircraft are lethally striking at a list of individuals in places like Pakistan, Yemen, and Somalia. And Apple’s App Store, for its part, seems to want nothing to do with it.

Drones+ is a smartphone app developed by NYU student Josh Begley. The app itself is pretty basic: when a drone strike occurs, the U.K.’s Bureau of Investigative Journalism compiles media reports and logs the strike in its database. Drones+ then displays that strike on a map within the app and links users to a few news stories about it. If the user chooses, he or she will get a push notification, a quick realtime alert that a drone strike just happened somewhere in the world.

The idea is to connect people a little more with the actions being carried out in their name and bring awareness, for good or ill, to the ongoing drone war that is now the longest continuous aerial bombardment the United States military has ever engaged in. But the Apple App Store reviewers have rejected the app on three separate occasions for reasons ranging from “this app isn’t entertaining enough” to “the content is objectionable and crude.”

Apple routinely turns down apps for reasons that are less-than clear, and it is under no obligation to accept any app. But these are strange charges to level against an app that simply aggregates news reports. It does not display any images of the carnage wrought at the scene of a strike. It’s simply meant to connect the drone wars with the citizens who are, willingly or not, supporting them and to make them aware of the frequency with which the U.S. Military and CIA are acting with deadly force on foreign soil. That has Begley wondering exactly what to do next. And the rest of us wondering what exactly it is that Apple really has a problem with: the app or the drone wars?