Why These 15 Scientists Marched For Climate Change Action

“There is no point in doing the research if no one is going to listen to the results,” says one researcher. 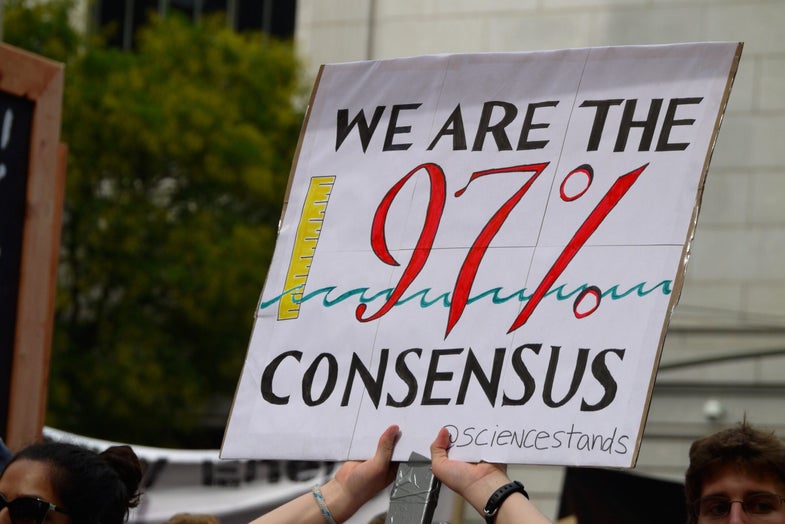 Scientists from research institutions, non-profits, and the private sector made themselves seen and heard on Sunday, September 21, when 310,000 people marched through New York City to demand action on climate change. This “People’s Climate March” was timed to coincide with a special climate summit for world leaders at the United Nations on Tuesday, September 23.

Most of the scientists Popular Science talked with said they were marching to call for much stronger action on climate change. “There is no point in doing the research if no one is going to listen to the results,” said Allison Jacobel, a paleoclimatologist at Columbia University’s Lamont-Doherty Earth Observatory. Humanity “has to survive the next thousand years,” said her colleague Etienne Dunn-Sigouin.

Among the non-scientists who joined the science section of the march, a man named Mark told us he was primarily there for the birds, such as the plush blue-footed booby sitting on top of his baseball cap. “The world is in danger and the powers who make decisions about the state of the environment are not responsive enough yet,” said Mark. “Hopefully this march will change some minds.” 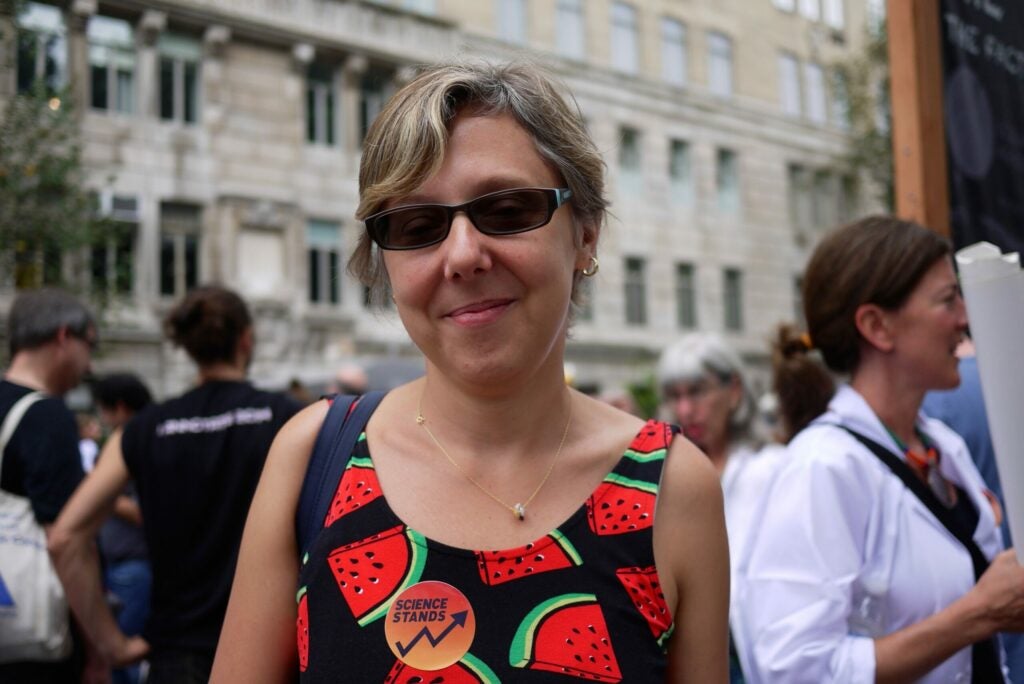 Alessandra Giannini of the International Research Institute for Climate and Society at Columbia University studies adaptation to climate change in monsoon regions. She said she was marching because “scientists are also citizens.” 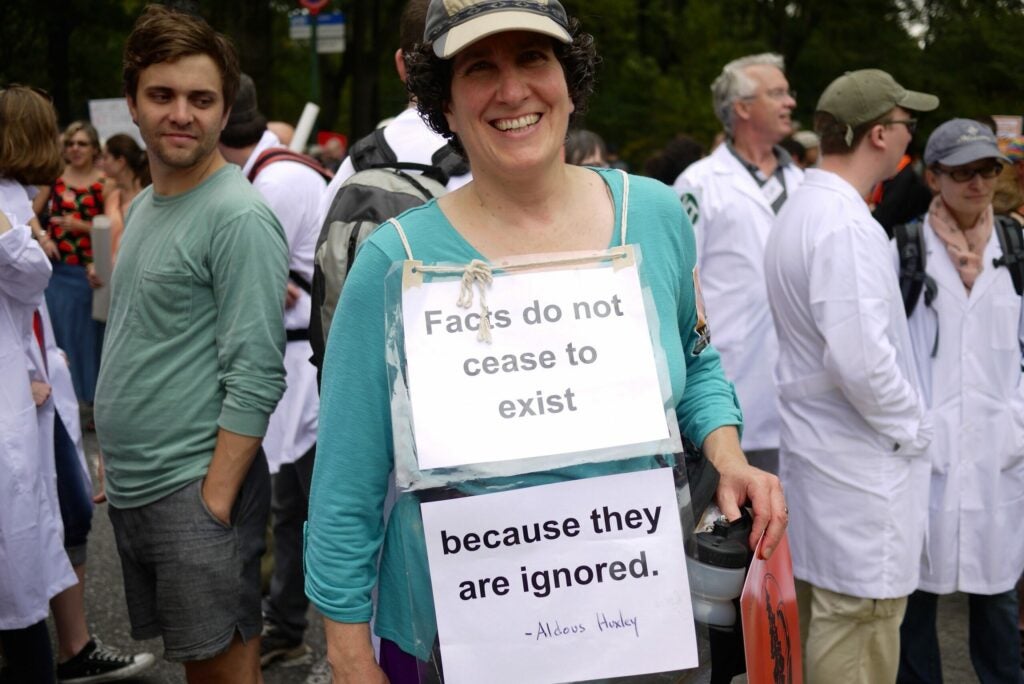 “I hope there will be a lot more publicity about the facts and the communities affected” by climate change, said Beth Richter, a middle school science teacher from Connecticut. 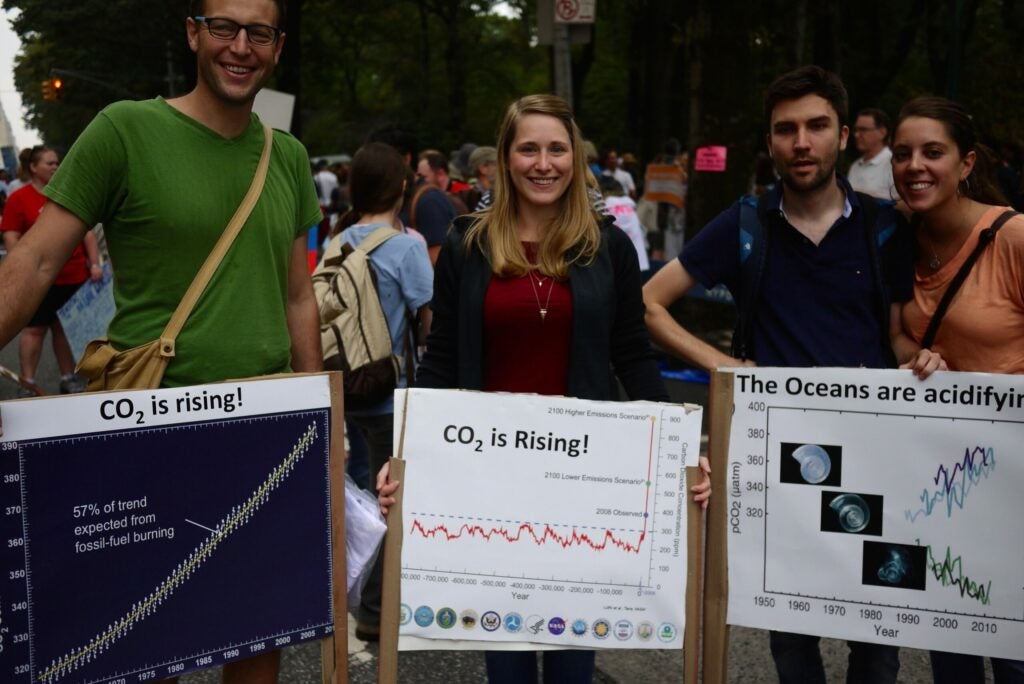 “There is no point in doing the research if no one is going to listen to the results,” said Allison Jacobel (second from left), a paleoclimatologist at Columbia University’s Lamont-Doherty Earth Observatory. “I think it’s our duty as global citizens,” said Etienne Dunn-Sigouin (third from left), also of Columbia, who studies atmospheric dynamics. “If we all go around in the same direction [as we are now] I think the prospects are pretty dire.” Also with them were Yoni, far left, and Catherine Pomposi, far right. 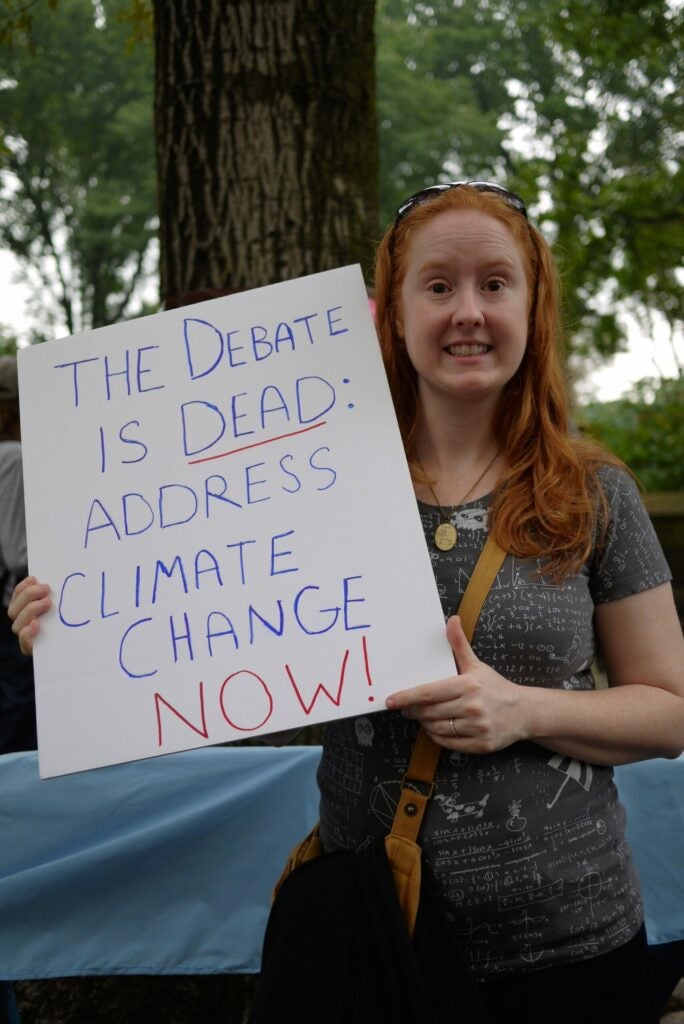 “I think it is important we act now,” said Jennifer Weber, a biology post-doc at Fordham University who studies population responses to climate change. 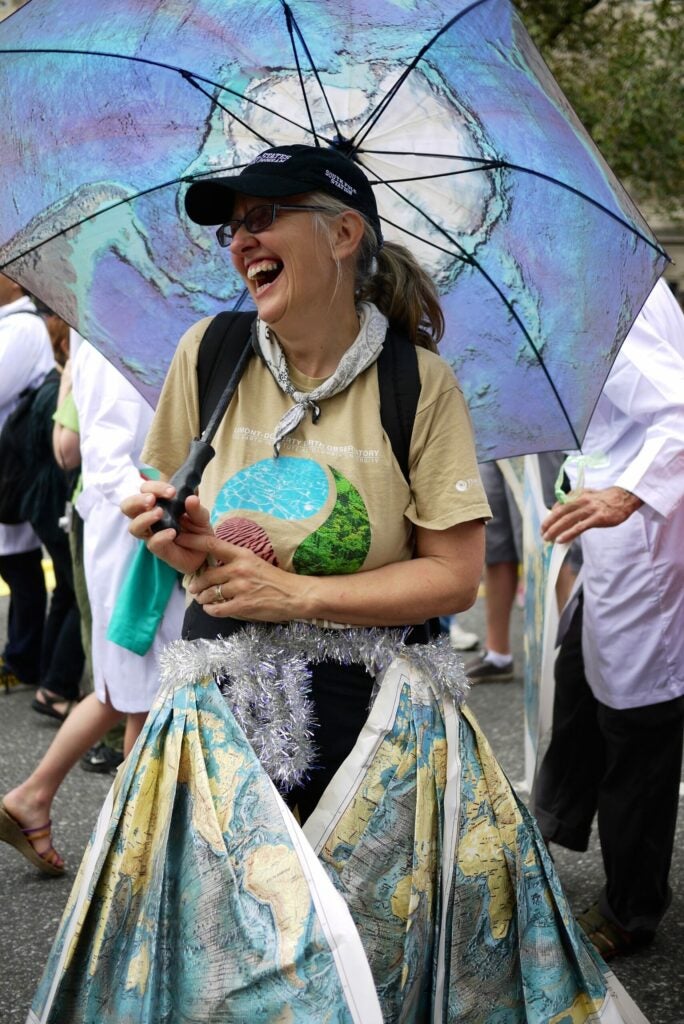 “I want people to remember that this planet is beautiful,” said Robin Bell, who develops technology to take atmospheric readings from the hull of C130 aircraft in Antarctica and Greenland. “Climate change is scary, but the planet is beautiful.” 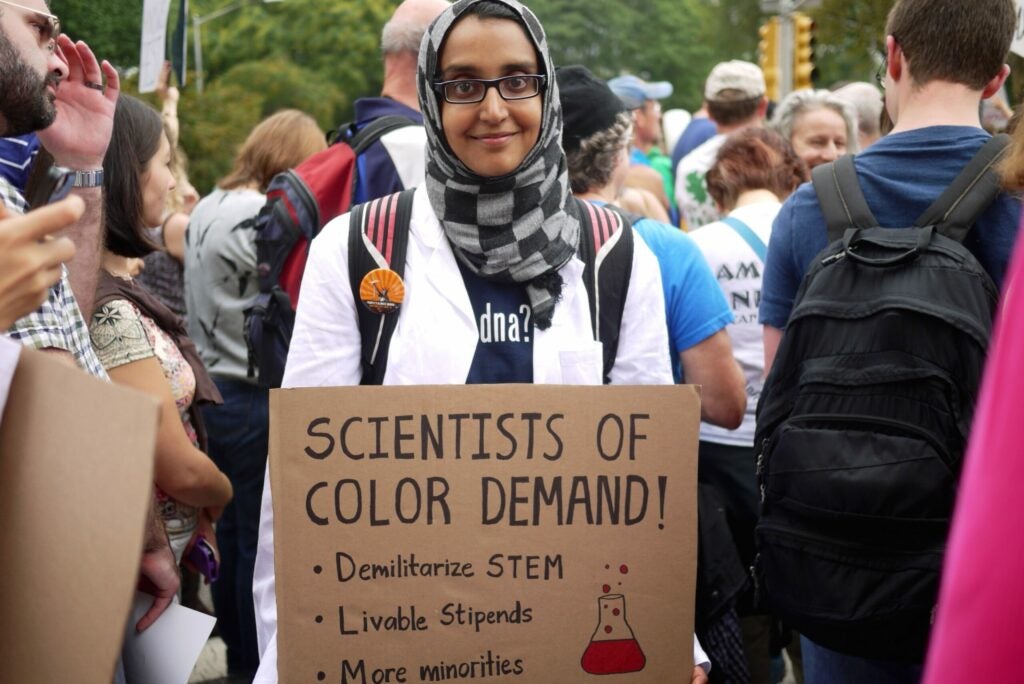 “I’m here to meet other scientists who are interested in more structural changes,” said Hala Iqbal, a graduate student in chemical biology at Rockefeller University. “We should be shifting funding away from things that are harming humanity to things that are benefiting humanity.” 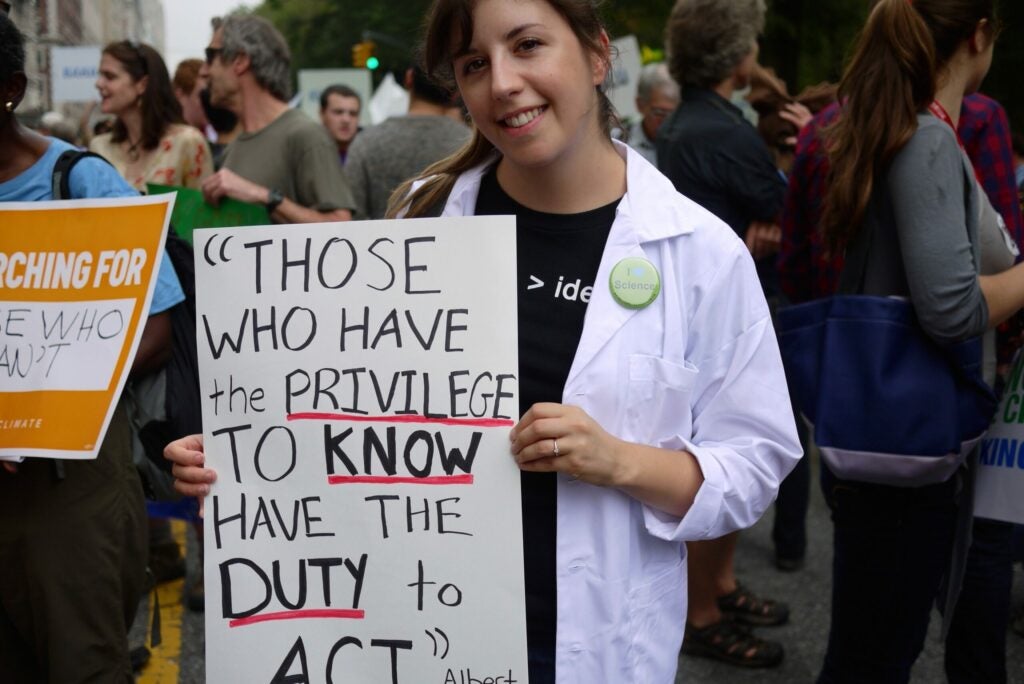 Canadian climate change policy is “moving backwards instead of forwards,” said Katie Gibbs, a biologist from Ottawa, Canada. “I’m here to show that Canadians want action even if our government doesn’t.” 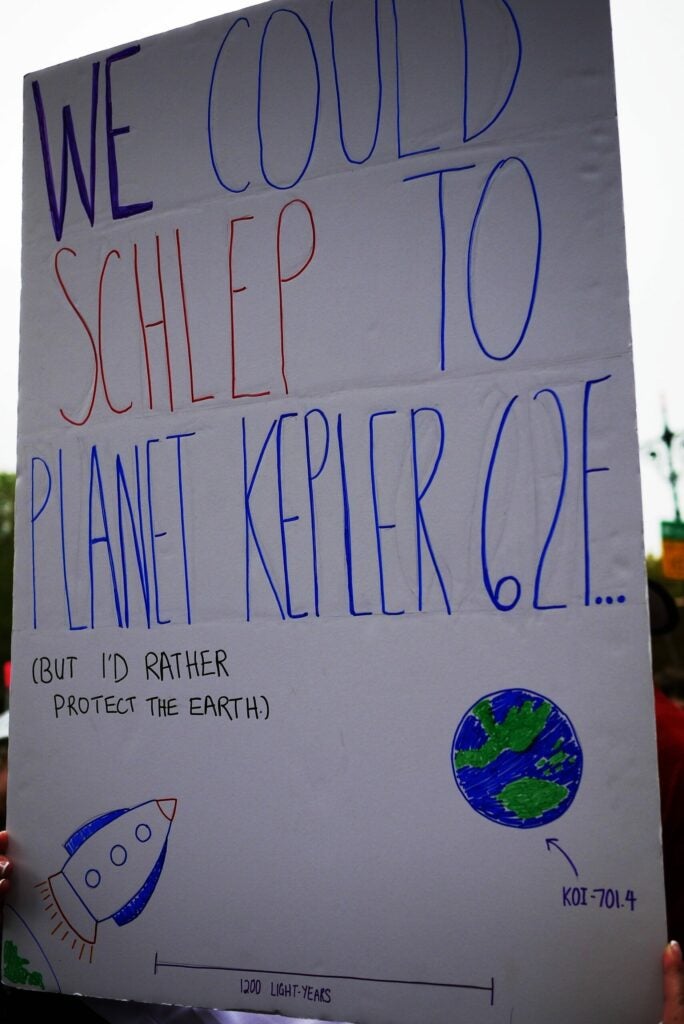 The woman holding this sign, a health educator and amateur astronomer said she came to the march – skipping out on a relative’s wedding brunch to do so – because it will be too hard to relocate to Planet Kepler 62F, a suspected “super earth,” instead. 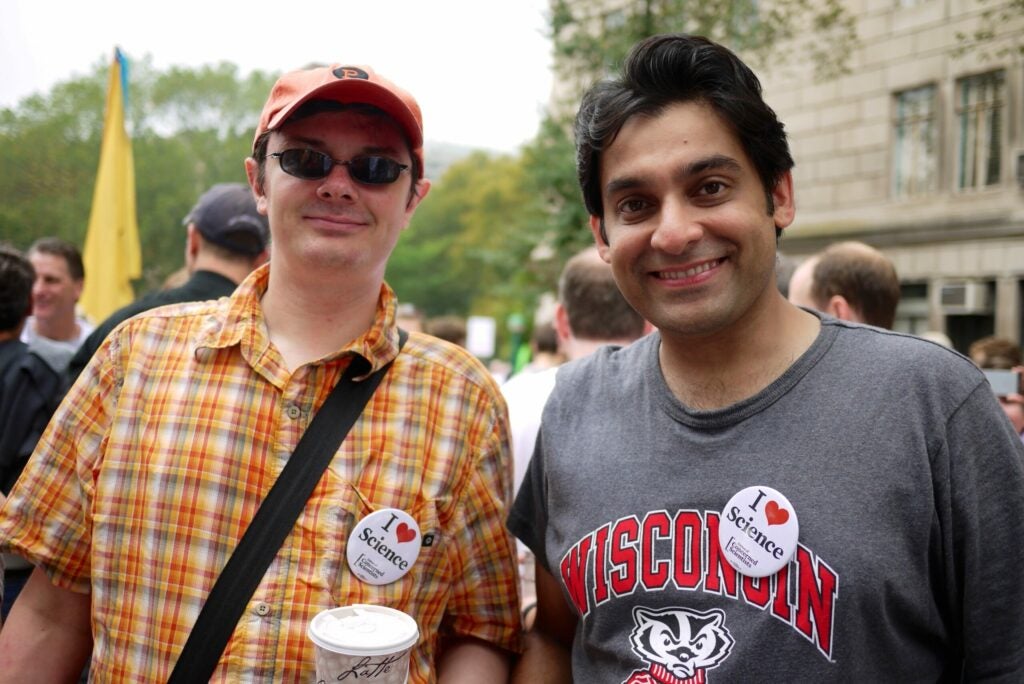 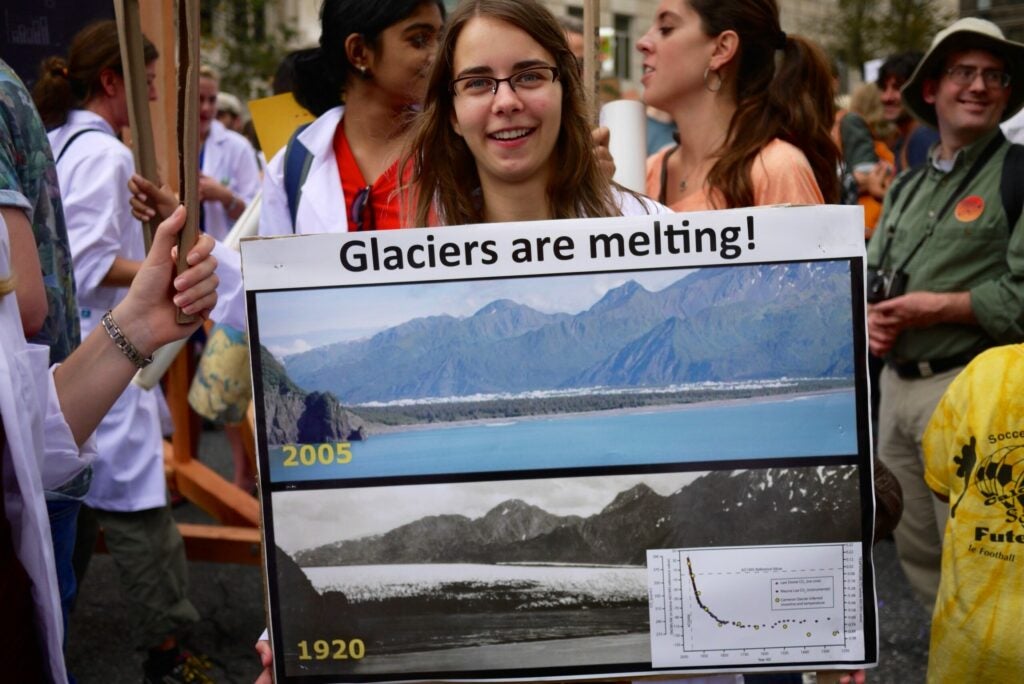 “I think climate change is a really important issue,” said Franziska Landes, a soil scientist at Lamont-Doherty Earth Observatory. Global warming was part of what motivated her to become an environmental scientist, she said. 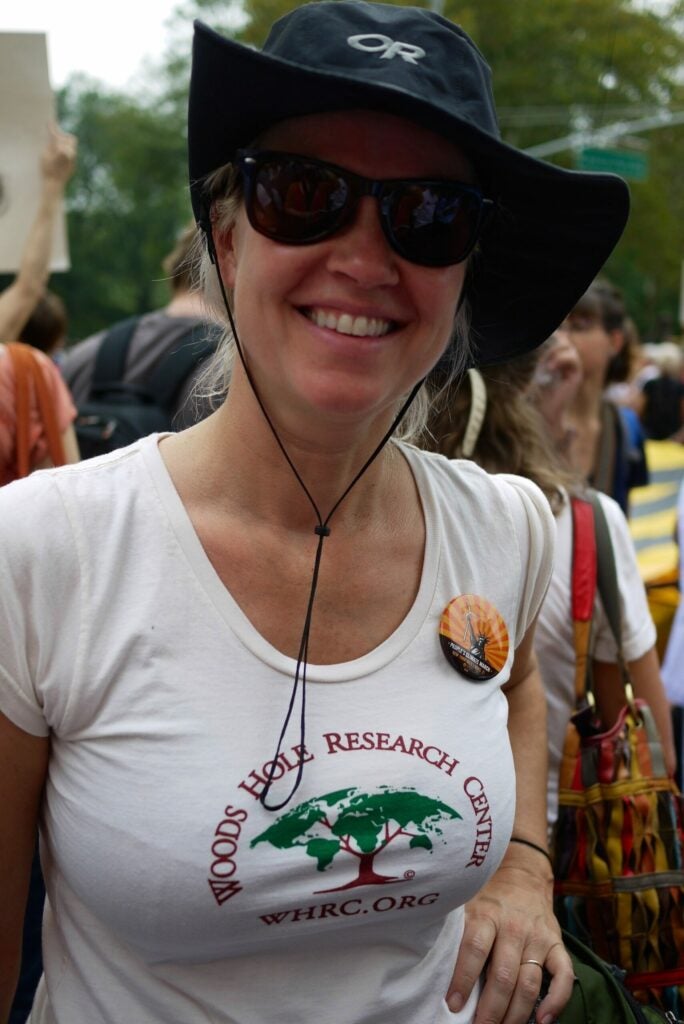 Eunice Youmans of the Woods Hole Research Center marched because greenhouse gas emissions from the United States have increased by almost three percent in 2014 compared to last year. 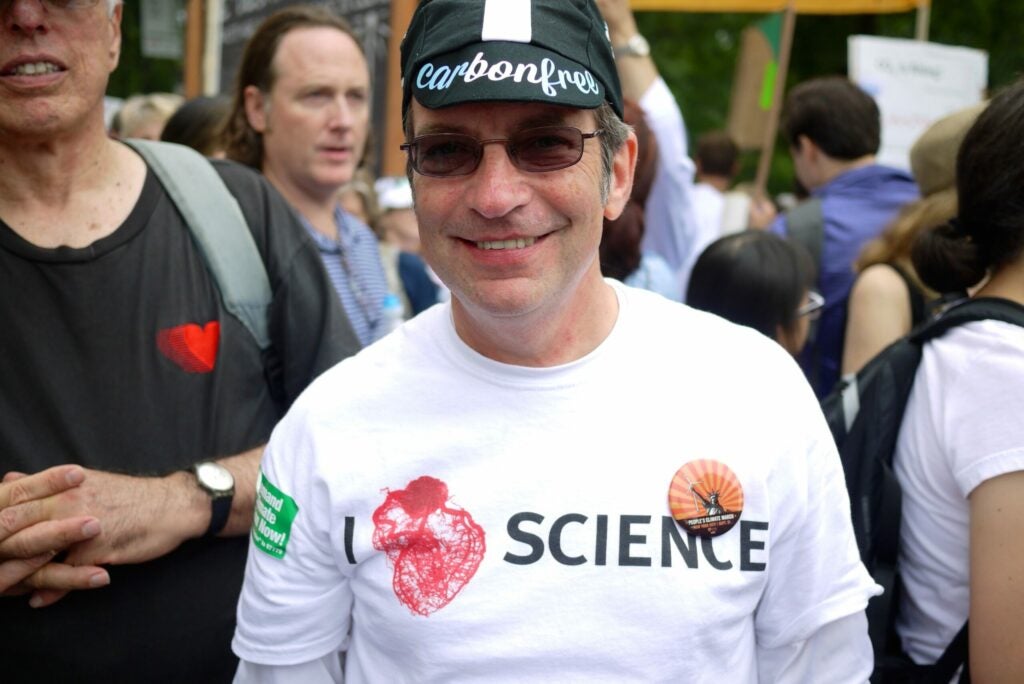 Eric Davidson, a senior scientist with Woods Hole Research Center, is on a “climate bike ride” from New York City to Washington, D.C., to raise money for the American Geophysical Union. But he and his companions came back up to New York from Princeton after cycling there the day before, to join the march. 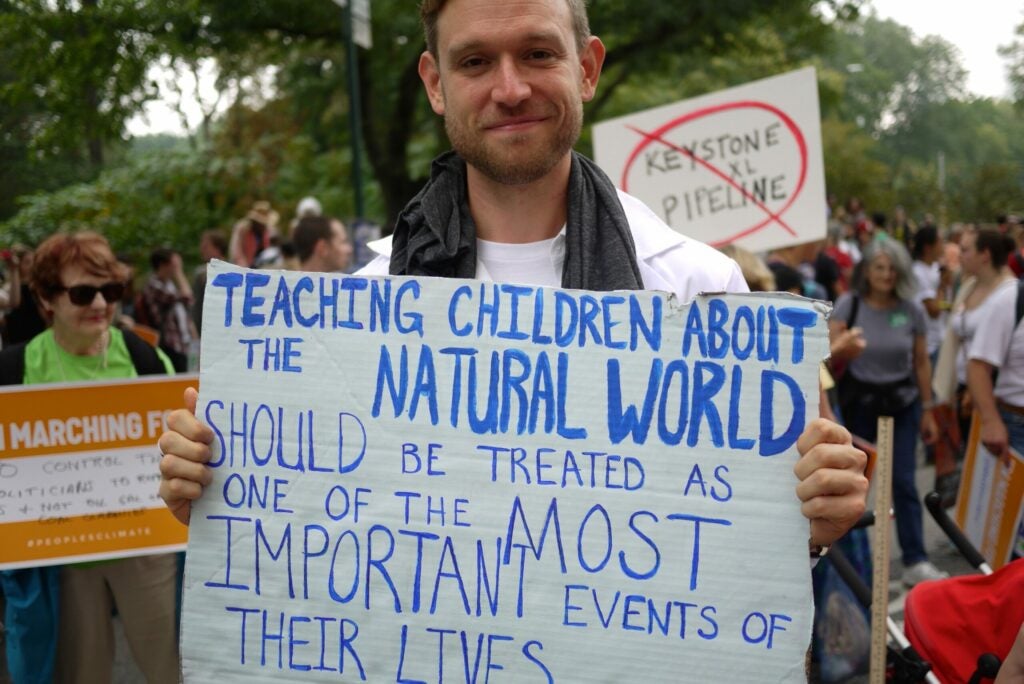 “I’m here for my daughter,” said Mike Klein, an archivist. “And I have an investment in the human species. I’m a species-ist – I like the humans.”
Climate Change
future of the environment
new york city
North America
protests