Pop Culture Mentions Of Global Warming Have Plummeted Since 2007

Plus, you can conduct your own searches for phrases spoken on TV and in movies over the last 80 years. 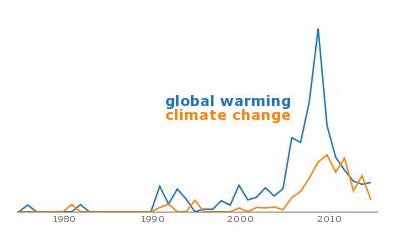 Since about 2007, American pop culture has stopped talking about climate change — at least in TV shows and movies. That’s according to a new analysis of mentions of the words “global warming” and “climate change” in the two mediums since 1980. See:

The analysis comes from Ben Schmidt, an assistant professor at Northeastern University, who works with large historical datasets. We’ve written about his cool work before. For this project, he obtained the scripts from closed captioning and subtitles for about 87,000 movies and shows. Then he wrote a program to calculate how frequently a searched word or phrase turns up each year, as well as a way to graph those frequencies for users. A click on the graph will show in which movies and shows the world appeared. For example, in 1931, “biology” appeared in the movies Frankenstein and Arrowsmith, which featured a bubonic plague outbreak. You can do your own searching here.

We conducted a few Popular Science-related searches and found some interesting trends.

“Science” has always been moderately popular, while people didn’t often say “technology” on-screen until after 1970:

Mentions of “physics,” “chemistry,” and “biology” have all generally trended upward over time. “Chemistry” was usually the most popular, but since the early 1980s, “physics” has caught up. Will it eventually overtake the science of bonds, atoms and reactions?

This is not related to Popular Science, but it’s a funny thing we found: While trying to compare boy bands of recent generations, we found it’s impossible to specify a definition for your search phrase, if there’s more than one. However, it does appear that since the mid-1990s, contemporary TV and movies have become ever more… directional: