Even after the species went extinct, people still reported "seeing" them in the wild. 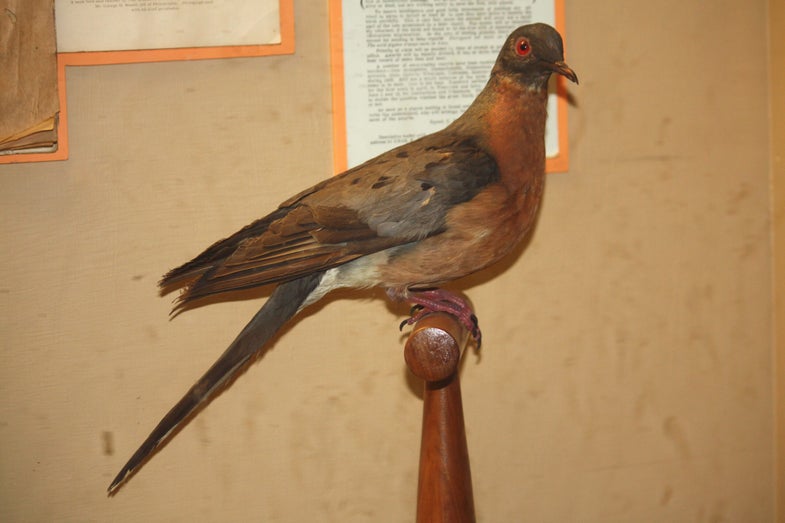 One hundred years ago today, the scientific community mourned the passing of a very important bird. Her name was Martha (after George Washington’s wife), and she was the last known passenger pigeon to have existed. She died in her cage at the Cincinnati Zoo in 1914, marking the end of the passenger pigeon species, Ectopistes migratorius.

Just a few decades prior to Martha’s death, the passenger pigeon flourished throughout much of North America; in the early 1800s, they were considered one of the most abundant species of bird in the world, with their numbers somewhere between 1 and 5 billion. They lived in giant colonies that stretched for miles in length, darkening the sky for hours as they passed overhead.

But a combination of over hunting and habitat loss caused the species’ numbers to dwindle, and between 1870 and 1890, the passenger pigeon suffered a “catastrophic decline,” with millions of birds slaughtered. After 1900, there were no longer any passenger pigeons in the wild, and only a handful (including Martha) remained in captivity at the University of Chicago. Their handler, zoologist Charles Otis Whitman, tried one last attempt to breed the birds — without success.

After her death, Martha was frozen in a block of ice and sent to the Smithsonian, where she remained on display for 80 years. Now, she is considered somewhat of a cultural icon, symbolizing the threat of extinction for many other endangered species.

But at first, it was hard for many people to accept the end of the passenger pigeon. For years after Martha’s death, numerous people kept “seeing” the bird in the wild, and many experts tried to figure out where they might have gone. In the October 1930 issue of Popular Science, the magazine details one of these “sightings.” 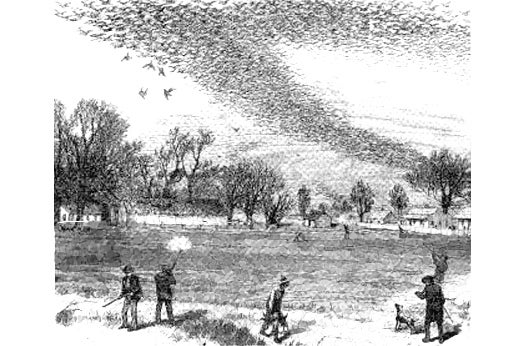 A flock of passenger pigeons being hunted.

Recent reports that the passenger pigeon, which supposedly became extinct in 1914, may not have perished after all have been given added weight by a scientific observer.

The first reports concerned the observations of two laymen. A Michigan publisher reported seeing a pair of passenger pigeons on the road sixteen miles from his Munising home. From a distance of only ten feet he could plainly identify them by the sheen on the neck and the red eyes. A Traverse City, Mich., physician, driving from Florida, observed a flock of about fifteen between Indianapolis and Kokomo, Ind. Both these men had hunted the birds in the years when they were common and were thoroughly familiar with them.

Now Dr. Philip Hadley, University of Michigan biologist, reports that he himself recently saw a bird that may have been a passenger pigeon; his companion, a veteran naturalist, obtained a better look and positively identified the bird. Doctor Hadley suggests that the species may be returning to the northern peninsula of Michigan, once a famous nesting ground for them.

Science has long considered the passenger pigeon as extinct as the auk or dodo. The last known specimen died in 1914 in a Cincinnati, O., zoological park. Previous to that, the last wild bird was seen near Detroit, Mich., in 1898, according to report.