Eat your heart out, Harry Potter 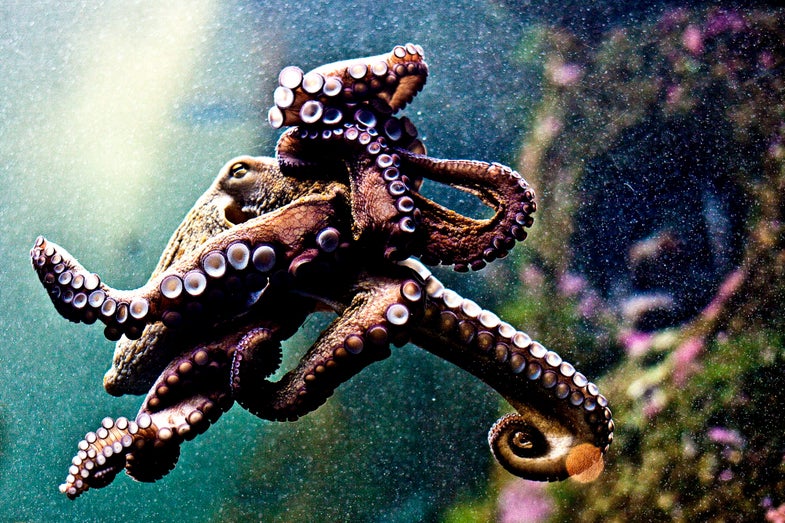 An octopus evading a predator has one of the coolest evolutionary adaptations up its (eight) sleeves; in a matter of milliseconds, its skin can change color and opacity to blend in with the surroundings, rendering the creature nearly invisible.

This camouflage trick is a trait shared by all cephalopods – squids and cuttlefish included — but now humans are getting in on the color-changing action too.

A team of researchers from the University of Houston and University of Illinois at Urbana–Champaign has created an artificial skin that can sense when light is being shined on part of it, and then change its color accordingly. The sheet can selectively go from black to white, depending on where the light is pointed. Check out a video of the process below:

The design is loosely based on the skins of cephalopods, which are comprised of special pigment cells called chromatophores. A group of muscles controls the size of these chromatopheres, changing their colors and creating different patterns. It is also thought that light-sensing molecules called opsins help cephalopods use their skin to “see” light, triggering their complex adaptations.

The new artificial material, detailed in the journal PNAS, mimics this biological process in a way. The top layer of the sheet is made up of heat-sensitive dye, which is black at room temperature and colorless at 116 degrees Fahrenheit (similar to the color-changing properties of the chromatophores). A second layer underneath is made up of numerous reflective silver tiles, creating the white background. And the third layer contains a silicon circuit, responsible for controlling the temperature of the sheet.

The fourth and final layer contains an array of light-sensing photodetectors that work kind of like the cephalopod’s opsins. These detectors sense when and where the light is being shined and tell the circuit to heat up in the right spot. This action causes the top layer to go colorless, and, in turn, the white background shines through.

Another interesting tidbit? The layered sheet is less than 200 microns thick, only twice the size of a human hair, and a silicone rubber foundation makes it super flexible.

However, cephalopods still have the upper hand in the camouflage department. Octopuses and squids can change into a variety of colors in a split second, whereas this new material can only go from black to white – and, as seen in the _PNAS _video, it takes a little bit longer to change. “This is by no means a deployable camouflage system but it’s a pretty good starting point,” John Rogers, one of the lead researchers on the project, told National Geographic. (Rogers is also known for creating transient electronics.)

Of course, if Rogers and his team fine-tune the system to adapt to more colors, such a camouflage skin could almost make a person disappear, making it useful for a number of military applications. Or, you know, for sneaking around Hogwarts.