During Surgery, Cats Prefer Listening To Classical Music Over AC/DC 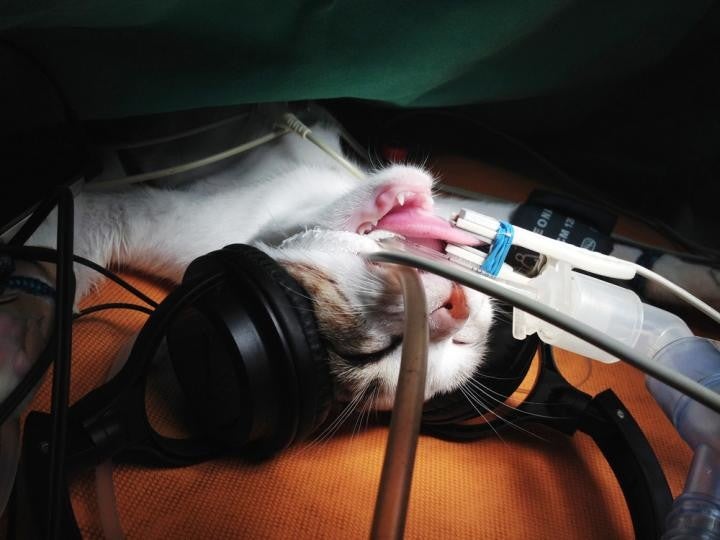 Doctors often listen to music in the operating room to keep the surgical team calm and upbeat. There’s some evidence that the music calms patients as well–even the ones who are unconscious from anesthesia. Now it turns out the benefits of music in the operating room may extend beyond humans. In a small study, veterinarians in Portugal found that music may keep cats calm during surgery, as well.

In a paper published in the Journal of Feline Medicine and Surgery, the researchers fitted 12 female cats with headphones. While they were being spayed, the unconscious cats listened to two minutes of silence, followed by two minutes each of Barber’s ‘Adagio for Strings (Opus 11),’ Natalie Imbruglia’s ‘Torn,’ and AC/DC’s ‘Thunderstruck.’ Meanwhile, the researchers recorded each cat’s breathing rate and pupil diameter as a proxy measure of its stress levels.

While the cats were listening to the classical music, their heart rates were slow and their pupils were small, indicating they were relaxed. AC/DC, on the other hand, had exactly the opposite effect, and the pop song fell somewhere in between (the cats were torn on that one, apparently). Now just imagine how happy they would be if the researchers played music cats actually like.

Up next, the team wants to investigate how music affects cortisol and catecholamine levels–which provide a more direct way of measuring stress–in both cats and dogs. Eventually, the researchers hope that the right kind of music could lower the dose of anesthesia pets need to stay calm during operations, which could make surgery safer for our furry friends.