Ganymede May Have Multi-Layered, ‘Sandwich’-Like Oceans

There may be up to three layers of different kinds of ice. 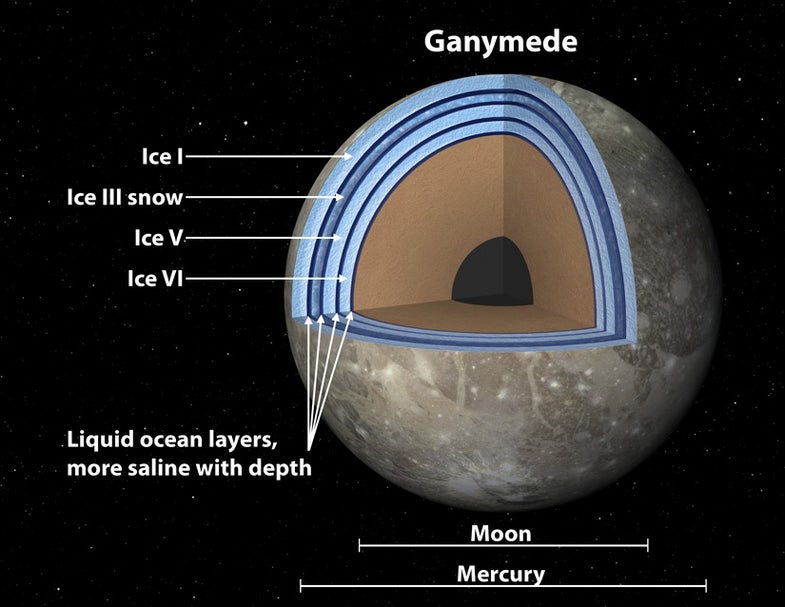 Here’s some planetary news that could make you hungry: Jupiter’s moon Ganymede may have a multi-layered ocean of alternating ice and liquid water that resembles a “club sandwich,” according to NASA. This is actually what Steve Vance of NASA’s Jet Propulsion Laboratory said: “Ganymede’s ocean might be organized like a Dagwood sandwich.”

For all of those unfamiliar with reference, probably including most of the scallywag youth who don’t read newspaper comics, Vance is speaking of the moon’s resemblance to a character in the “Blondie” cartoon, who is fond of multi-tiered sandwiches. But enough about sandwiches. Except now I want one.

It used to be generally thought that our solar system’s largest moon contained an ocean with ice on bottom and top.

To come up with the “club sandwich” result, scientists included the presence of salts thought to reside in Ganymede’s ocean, and modeled how they would react under pressure. Analysis suggested salt-rich water could sink to the bottom–and form multiple layers of different kinds of ice.

The kind of ice one usually thinks about, on Earth, is called Ice I. It is the least dense kind. But crushing pressure on Ganymede could create up to three layers of ice, with different kinds in each. The densest and heaviest ice on Ganymede is called “Ice VI.” (This reminds me of “ice-nine” in Kurt Vonnegut’s hilarious book Cat’s Cradle.) The types of ice differ in their crystal structure–the molecules in ice III and ice VI are respectively more tightly packed together. While all earthly ice is ice-one and forms hexagonal crystals, ice III and VI form tetragonal crystals.

Scientists think that the interaction of water and rock could possibly support life; in the previous model, it was assumed ice coated the moon’s rock bottom. But no longer. “This is good news for Ganymede,” Vance said. “Its ocean is huge, with enormous pressures, so it was thought that dense ice had to form at the bottom of the ocean. When we added salts to our models, we came up with liquids dense enough to sink to the sea floor.”