A spacecraft spies a pretty phenomenon. A simulated view of the glory phenomenon on Venus. The false-color image obtained by the spacecraft is below. C. Wilson/P. Laven/NASA
SHARE

Behold the glory that is the first rainbow image obtained from Venus. This rainbow is a type of glory, formed by light passing through cloud droplets. Glories are formed when light bounces off spherical cloud particles in the same direction from which it came, creating a ring of light only visible if you (or a spacecraft) are directly between the center of the glory and the sun. That’s what happened here–the image below was captured by the European Space Agency’s Venus Express, and reported in the journal Icarus.

“A full glory has never been seen before outside of the terrestrial environment,” Wojciech Markiewicz, at the Max Planck Institute for Solar System Research told New Scientist.

The glory may have solved a mystery. Previously, images from Venus suggested the presence of a chemical besides sulfur acid, which makes up clouds on the planet. But now, “the team found that sulphuric acid droplets alone cannot explain the glory, but droplets coated with elemental sulphur or mixed in with ferric chloride fit the data well,” according to New Scientist.

“This could be the so-called unknown absorber that people had been trying to identify for years,” said Markiewicz, who was part of the team that spotted the glory. 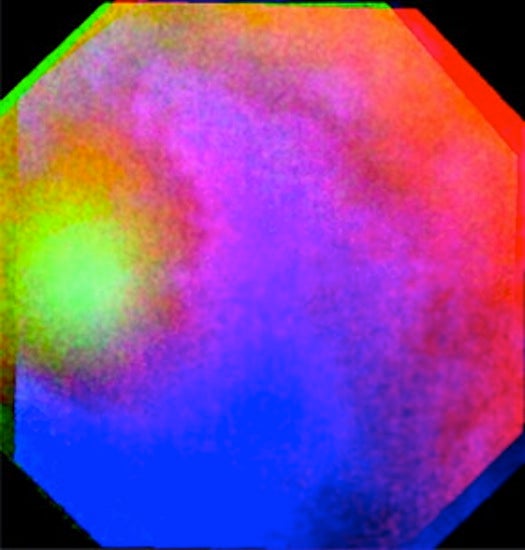