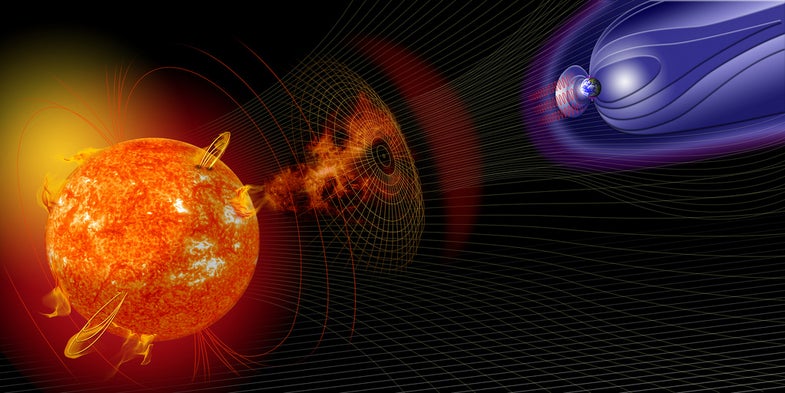 Earth has a magnetic field, which begins at the core and stretches far out into space. Typically, this magnetic field is a useful shield for solar activity. However, if the Earth’s magnetic field bumps up against the sun’s magnetic field, all types of madness can ensue, including geomagnetic storms, or space weather that can affect the International Space Station.

This meeting of the magnetic fields is known as magnetic reconnection. During this process, the sun’s electrical currents can enter Earth’s atmosphere, and in the process, some of our own magnetic field gets stripped away. A new study from MIT and NASA, published in the journal _Science _this week, explores how a plume of plasma adds extra reinforcements to keep us earthlings safe during solar activity.

The plume is not terribly unlike a river, with particles that flow through a stream. “This higher-density, cold plasma changes about every plasma physics process it comes in contact with,” MIT Haystack Observatory associate director John Foster said in a statement. “It slows down reconnection, and it can contribute to the generation of waves that, in turn, accelerate particles in other parts of the magnetosphere. So it’s a recirculation process, and really fascinating.”

Since space weather events create radio wave distortion, scientists at the Haystack Observatory have been analyzing radio signals to determine plasma particle concentration, using the data to map the plasma plumes from Earth. While they have been performing the research for 10 years, the researchers note that this is still just an estimate. So the team matched the Earth-based research with space-based data, monitoring a solar storm last January. Three spacecraft crossed one point in the magnetic field where a plasma plume was estimated to be. Data from those craft confirmed that dense plasma plume, which extended to the place where Earth’s field met the solar storm.