Microsoft’s Kinect gaming system has lots of uses – you can exercise with it, catch criminals or even create real-time... 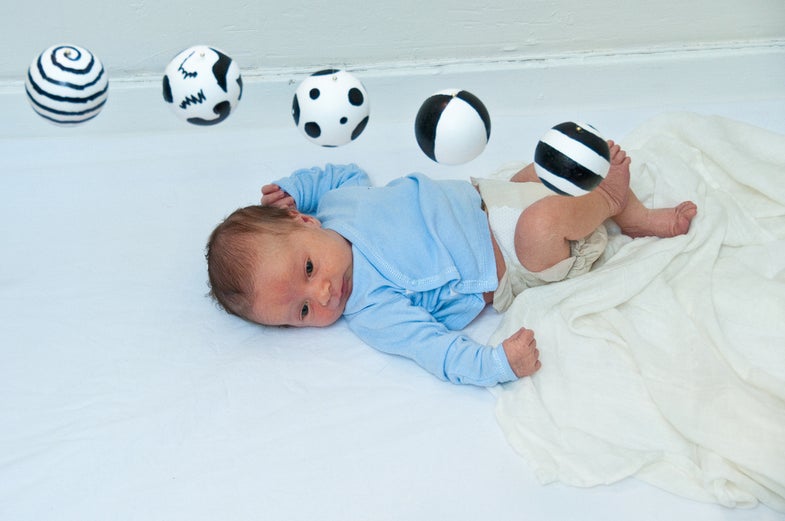 Microsoft’s Kinect gaming system has lots of uses – you can exercise with it, catch criminals or even create real-time light sabers. But now it can also help newborns get their legs stronger.

First, a little background: premature babies are at higher risk for cerebral palsy – nearly half of people who develop cerebral palsy were born premature. Moving their legs can them improve their outcomes. Barbara Sargent, Assistant Professor of Clinical Physical Therapy at USC had designed a large unit to help encourage the babies to kick their legs – yes, even babies as young as 2-3 months learn to modify spontaneous kicking actions when responding to a mobile. But the project had a snag: the contraption Sargent built was far from portable, and parents of babies recently released from the Intensive Care Unit weren’t excited about bringing their newbies back to the hospital for therapy.

So she turned to USC’s Institute for Creative Technologies, where researchers are using video games for rehab (among other things). Kevin Feeley, a product manager at ICT, has started to design a system using the Kinect as a sensor array that would activate a mobile when a baby’s legs were raised above a certain place, and then stop after three seconds. Sargent had found that babies in her invention were able to discover the link between kicking their legs and getting the mobile to spin, which she reported in a March 2014 PLoS paper. “You may think of babies as blobs of random, but there’s a surprising amount of intentionality there,” says Feeley.

There are some unusual design considerations that come with working with infants. For one, the system, called the Infant Kicking-Activated Mobile, has to be waterproof – the babies don’t wear diapers during the 8-minute exercises because diapers can impede their movement, so getting peed on is a serious likelihood.

The Kinect also has trouble recognizing the baby’s form as human, since babies are so tiny (and on their backs). Feeley is experimenting with using small wearable LEDs or colorful bracelets so the sensors will better recognize the babies. They are testing the portable system now and will start running a study in a few months.

Feeley is excited about the prospects of using gaming devices for physical therapy and rehabilitation. “There are these game devices entertainment products can be used to address beyond entertainment address health needs in populations you couldn’t imagine would have benefit from them,” he says. “We’re taking stuff that was never intended for this, and proving that the Kinect can track movement in infants. That’s a really cool thing, from a system that’s relatively affordable.”

The Kinect is increasingly being hacked for medical uses, including those for kids. A University of Minnesota project is using it to scan for early signs of autism. Another project says the Kinect could monitor breathing in cars, making sure infants don’t overheat. Feeley says the next generation of Kinect will bring even better sensor technology, and that may lead to a new kind of infant technology. “The infant monitor of the future could be this souped-up array, able to tell emotional states, heart-rate and all kinds of things.”