In the mid-1960s, spacewalks and the unknown challenges astronauts were sure to face on extended EVAS were a real concern... In the mid-1960s, spacewalks and the unknown challenges astronauts were sure to face on extended EVAS were a real concern for NASA. The agency needed to find some way for its astronauts to maneuver through the vacuum of space while also performing complex tasks. Some engineers came up with a novel and surprisingly simple solution: jet shoes. 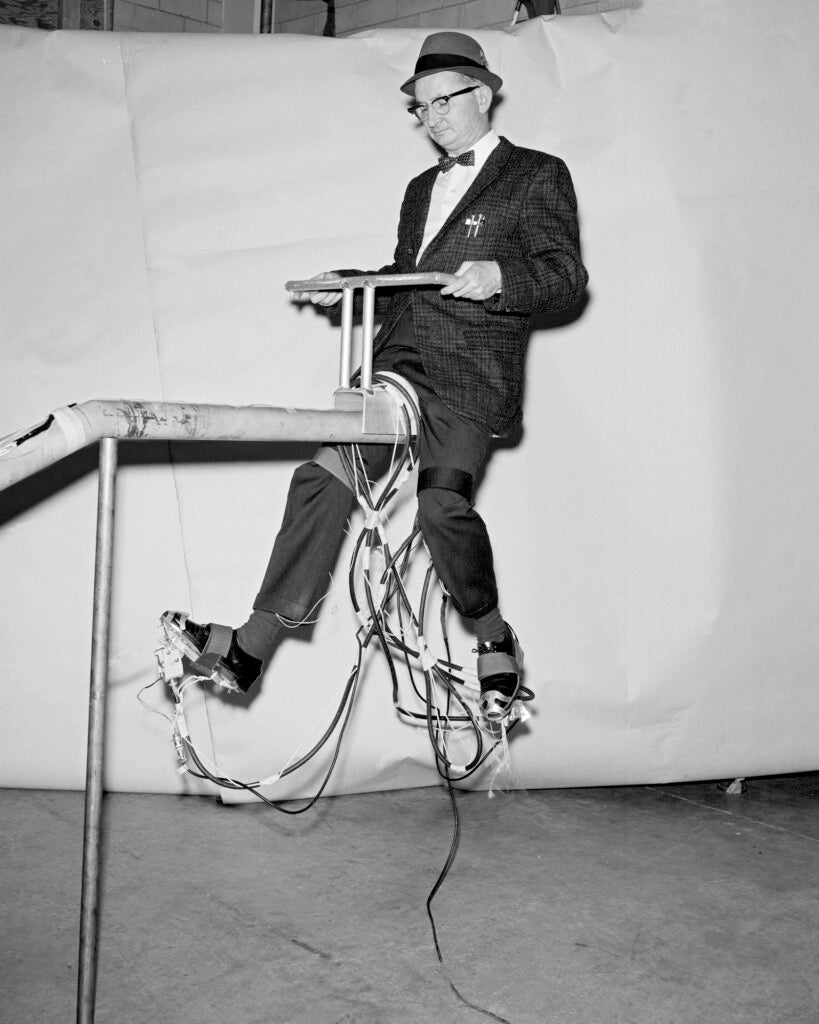 The jet shoe concept was pioneered by NASA Langley engineer John D. Bird in 1965. In part, Bird was inspired by his colleagues Charles Zimmerman and Paul Hill. Their “Flying Platform” was a proof-of-concept mobility test that demonstrated man’s inherent ability to control his direction of travel with a propulsion system attached to his feet. Bird also looked to swim divers who use flippers to generate directed thrust in the weightless-like underwater environment.

But the strongest argument for Bird in pursuing jet shoes was the most obvious: humans spend a lot of time upright and have a finely developed sense of balance. Using an astronaut’s natural equilibrium as a sort of attitude control system for EVA activity seemed obvious.

A foot-mounted propulsion system had another benefit, also something obvious from humans’ day to day activities. Controlling himself with jets mounted to his feet would free as astronaut’s hands for EVA activity, something Bird expected would be handy on more complex spacewalks, say in constructing a space station in orbit.

Bird’s jet shoes system was pneumatic and fairly simple in its design. The bulk of the system was externally mounted. There was a storage backpack assembly worn by the user designed to hold about 15 pounds of gaseous oxygen pressurized at 6,000 pounds per square inch, and of course there were the jet shoes worn over the astronaut’s boots. The pressurized gas reached the solenoid valves of the jets by supply lines, delivering two pounds of thrust from each thrust valve nozzle with a pressure of about 165 pounds per square inch.

The internal part of the system was the operating switch that turned the jets on and off. These were located under the bare ball of the astronaut’s foot, a simple a toe switch (though mouth-controlled bite bars and sip switches were also briefly considered). The jet on each shoe was controlled by that foot’s big toe in an intuitive fashion. Pressing down on the toe switch activated the jet and ignited the thruster on that boot. 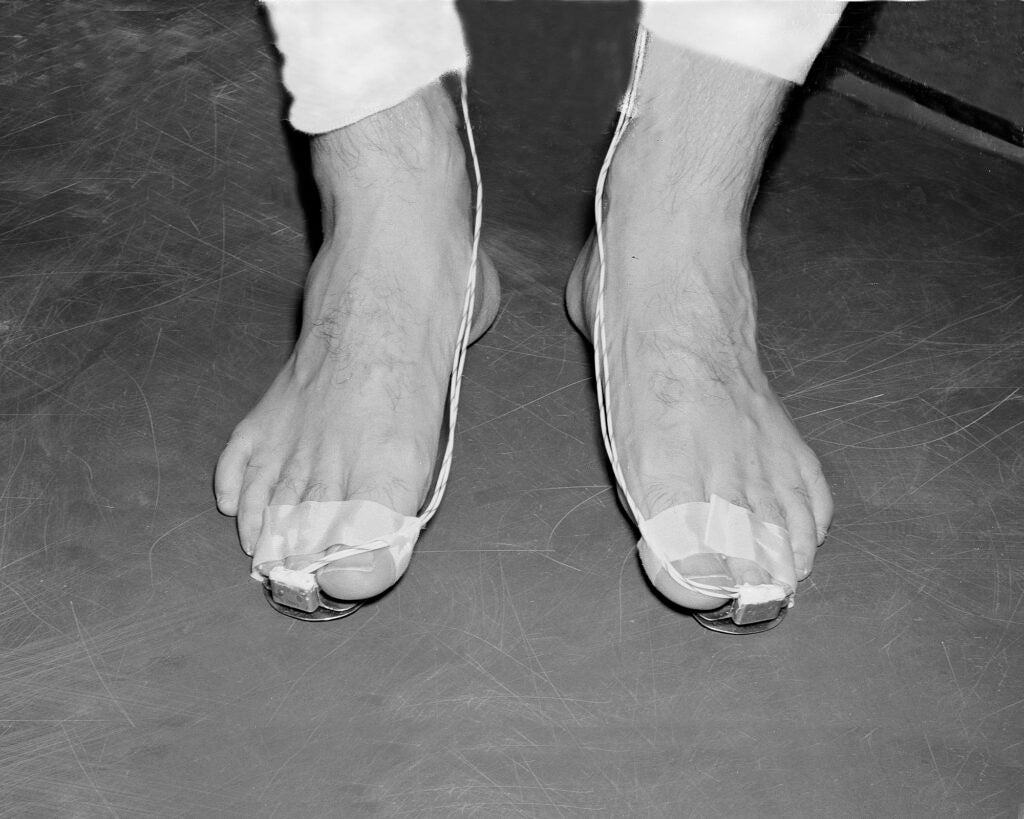 The toe controls for the jet shoes.

Standing upright (if we can imagine an “up” and “down” in orbit for a moment) the thrust from the jet shoes would send the astronaut straight upwards. Attitude and directional control came from the astronaut moving his legs and feet to direct the direction of the jets’ thrust.

A series of tests in four different arrangements done at Langley proved the jet shoes were a sound concept for EVA mobility. Some tests were done using a simple pendulum system that suspended a test subject from the ceiling. Another set of tests was done using a more complicated whipple-tree suspension setup for translational and rotation tasks. A third set of tests used the overhead dolly Langley’s rendezvous and docking simulator to create a translating suspension system. The final test setup used an air-bearing facility. Almost like the puck on an air hockey table, the test subject was supported by airbags on a nearly frictionless surface to simulate the freedom of motion an astronaut would have in zero gravity.

In all the tests, the subject was lying on his side, navigating by moving his feet to direct the direction of the jet shoes’ thrust to get from one portable fence post to another. And all these tests were limited in that they gave the user only three degrees of freedom in a horizontal plane — pitching, fore-and-aft, and head-to-foot movement — and not the six degrees of freedom an astronaut has in space. Still, the these side-lying tests were deemed successful.. 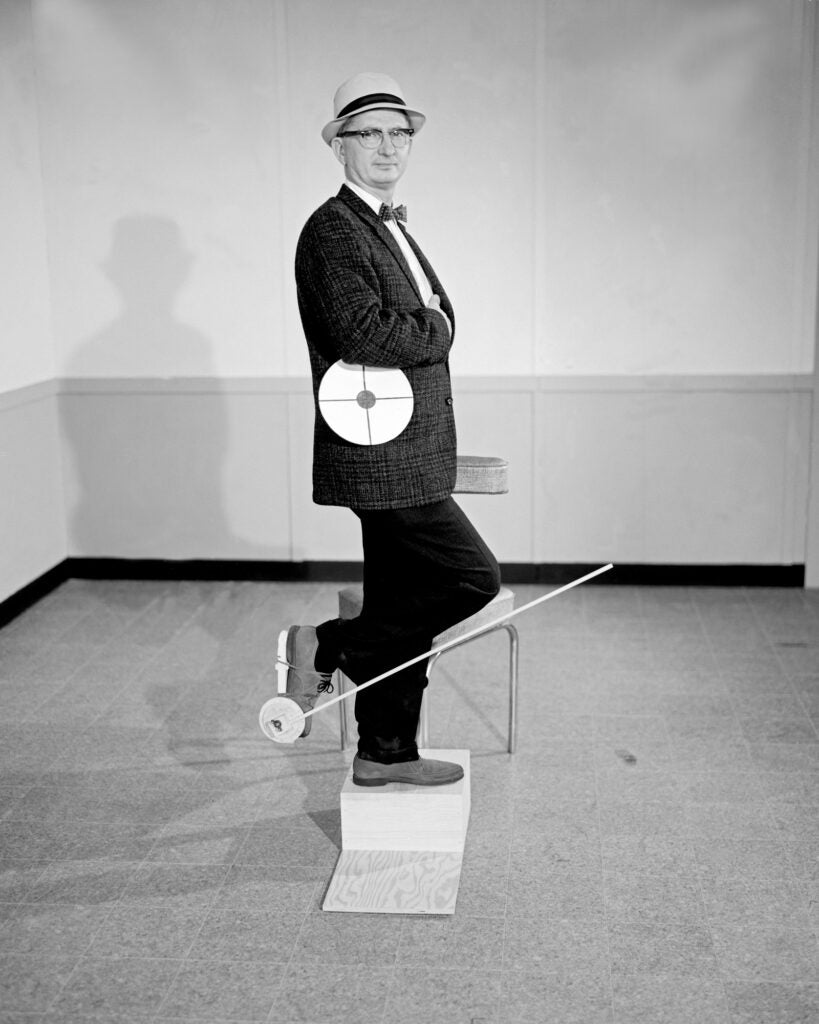 But jet shoes, as history tells us, never took off. Bird and the team who worked on the project knew the system wasn’t perfect. There was some question about whether or not a toe-switch would work with a pressurized spacesuit. The first jet shoes were also heavy, cumbersome, and demanded constant adjustment, something spacewalking astronauts could not be expected to deal with. A later, lightweight version made from a pair of modified aluminum roller skates was easier to use but the overall system was still questionable.

In spite of its drawbacks, the test program at Langley proved that a simple pair low-thrust jets attached to an astronauts shoes could provide some usable propulsion and maneuverability for EVAs. There was eventually enough interest in the jet shoe concept to run a series of tests in space. NASA tested the Foot Controlled Maneuvering Unit during Skylab missions in the early 1970s. Unfortunately, like the jetpacks NASA tested on shuttle missions in the early 1980s, the technology never became a staple of spaceflight.