Mapping The Hidden Universe In Your Kitchen

An invisible world of microbes 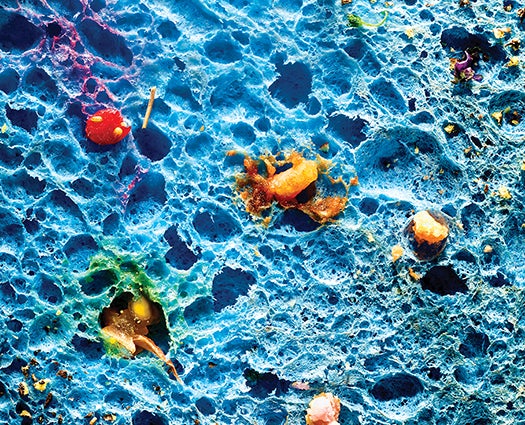 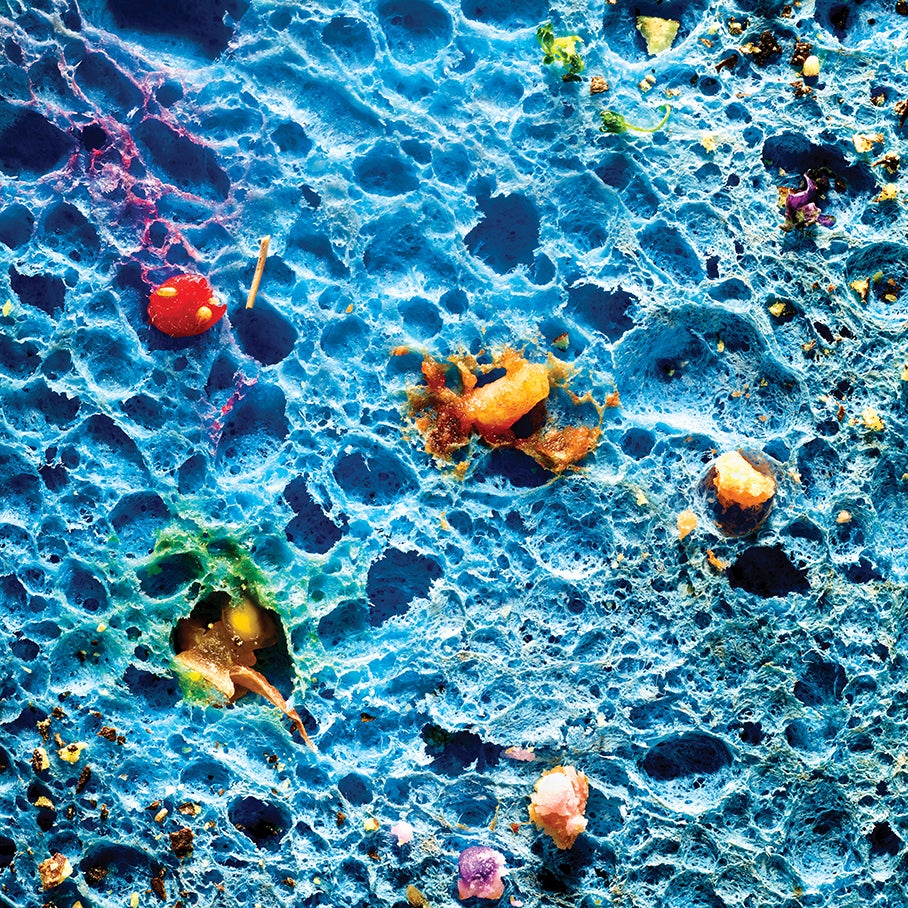 On a recent morning, Noah Fierer, a professor of ecology and evolutionary biology at the University of Colorado, Boulder, found himself standing 1,000 feet above the farmland of eastern Colorado. He was perched near the pinnacle of the Boulder Atmospheric Observatory, a cellphone-tower-like spire built in 1977 to conduct climate and weather research. To reach the top, Fierer and his colleague Joanne Emerson had taken a five-minute ride in the tower’s cramped elevator to an even more cramped catwalk 90 stories up. Dressed in hard hats and safety harnesses, the two leaned over to check a small device strapped to a latticework platform. The machine, which they’d installed several months earlier, sucked in air every night, filtered it, and stored the contents for collection every two weeks. It was basically a vacuum cleaner but instead of hoovering up dirt, it captured microbes.

Microorganisms surround us. In the relatively desolate atmosphere at 1,000 feet, every cubic meter of air contains about a thousand microbes. Closer to the ground, that number skyrockets to 100,000, and on every square centimeter of human skin, it jumps to 10 million. A teaspoon of dirt contains 50 billion microbes, more than seven times the number of people on Earth. Yet despite such abundance, scientists know little about the microbial ecosystem. We understand less about the bugs in our home, for example, than the animals in the deepest ocean trenches. We know even less about their impact on us. How do microbes shape our daily lives—and how do we shape theirs? Do they trigger asthma and allergies—or help prevent them? It’s as if we’re living in an invisible world, and like the Victorian naturalists before him, Fierer is charting it.

One of the country’s foremost microbial ecologists, Fierer collects and classifies microorganisms such as bacteria, archaea, fungi, and viruses. “I’m a natural historian of cooties,” he says. Until a few years ago, microbial ecology was a relatively staid field. Because of the tiny size of the organisms involved and the inability to grow many of them in petri dishes, Fierer says, most microbiome studies were akin to surveying the biodiversity of the Amazonian rainforest and coming back with five species. Then came DNA sequencing. Fierer and others can now classify thousands of species quickly and easily and determine their functions. “It’s fair to say we are entering a golden age of microbial ecology,” he says.

In the past five years, Fierer has explored the microbial diversity of such environments as public restrooms, armpits, and caterpillar stomachs. Sometimes his findings shed light on the greater realm of microorganisms. At the Boulder Atmospheric Observatory tower, he’s helping Emerson determine what kinds of creatures can survive in the air currents that blow in from California and beyond. Other times, his discoveries tell us about ourselves and how we unknowingly shape the microbial world. He’s proved, for example, that people leave behind unique microbial fingerprints on surfaces like computer keyboards long after they’ve touched them, a fact that made it into a recent CSI: Crime Scene Investigation episode. (No one has used the technique in an actual investigation yet.)

Lately, Fierer has turned his attention to one of the richest and least understood microbial environments: the American household. In 2011, he joined the Wild Life of Our Homes project, which was started by Rob Dunn, a biologist at North Carolina State University (and Fierer’s co-author on studies that explored beetle bacteria and the organisms living in our belly buttons). The project aims to map the microbial biodiversity of homes across the U.S. “We really didn’t know what to expect,” Fierer says. As he and Dunn often point out in their research, there are more kinds of microbes in a typical home than there are species of birds on Earth. “It should be shocking to people that we live with thousands of species, some of which make us sick and some of which don’t,” Dunn says. “We have no idea what determines which ones live in your house, and for the most part, we have no idea which ones are beneficial or detrimental.” 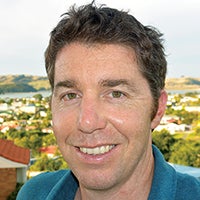 To change that, Dunn’s citizen-science initiative at NC State advertised for volunteers. More than 1,400 people from all 50 states signed up. Each volunteer had to fill out a questionnaire about his or her cleaning routines, pets and plants, and medical history, among other miscellanea. Participants then received basic swab kits, which they used to take samples from their kitchen counters, pillowcases, and the tops of interior and exterior doorsills. (In a 2011 pilot study of 40 homes in North Carolina, volunteers also swabbed toilet seats, door handles, TV screens, and other objects, but there was enough overlap among the microbial communities in those samples that the number of swab locations could be reduced.) The samples were then sent back to Fierer for DNA sequencing.

In Fierer’s Boulder lab, researchers extracted the microbial DNA from the swabs using chemical solutions and centrifuges; then they chemically amplified and sequenced specific marker genes that could help identify species and their functions. In a matter of months, the team had compiled the largest data set on microbial ecology ever assembled. It contained hundreds of millions of DNA sequences and started yielding discoveries almost immediately. For example, researchers found about 3,500 bacterial species on interior door trims, meaning there are about 3,500 kinds of bacteria floating about in the average house—500 more than the study found deposited on exterior door trims.

As Fierer compared household data from different regions, he found that there were two main outdoor bacterial-and-
fungal-community types collected on doorsills, one predominately along the East Coast and in the Pacific Northwest, and the other prevailing everywhere else. “As soon as we saw it, we said, ‘Holy crap, there is some structure here,'” Fierer says. What causes the different microbial clouds? Fierer thinks they could be linked to geographic patterns, including precipitation, soil pH levels, and forest cover. But only more research can say for sure.

Fierer could also see forensic applications for his work. “We may be able to demonstrate that we can use microbes found inside or outside homes to pinpoint where that home is located,” he says. “It could even be used to determine where a criminal had been by looking at the microbes deposited on his or her clothes or deposited on surfaces in a car.”

Data analysis on Wild Life of Our Homes continues, as do efforts to develop digital interactive “report cards” that will allow the 1,400 volunteers to learn about the abundance and likely environmental sources of the various microbes that live on their pillowcases. In the meantime, Fierer is developing new projects. He’d like to investigate the links between skin microbes and body odor, and he champions the idea of protecting endangered microorganisms. “There’s lots of literature on plant and animal conservation, but what’s often left out is conserving microbes,” he says.

As Fierer lists all the projects on his bucket list, it’s hard not to picture a very different world from the one we know, one in which every surface has seething bacterial colonies, fungal deposits, and viral hoards. Yes, Fierer explains, we’re all steeping in microbial soup—for better and worse. “Thankfully,” he says, “I am not a hypochondriac.”

What’s living with you?

One morning about a year and a half ago, at my home in Brooklyn, New York, I woke up the usual way: My dog leapt into bed and plopped his face on my pillow. That day, I wondered what came with him. Did living with an animal influence my apartment’s microbial composition? To answer that question, I signed up for the Wild Life of Our Homes project, run by Rob Dunn at North Carolina State. Volunteers swab prescribed locations in their living spaces to collect microbial DNA, which is then sequenced to reveal which species appear where. Here’s how I compare with 18 other people in the U.S. —Brooke Borel