Judging By Its Funny Orbit, The Moon Titan May Have a Massive Ocean

Along with methane lakes and ice volcanoes, Titan’s bizarre features could include a massive subsurface ocean similar to that of... 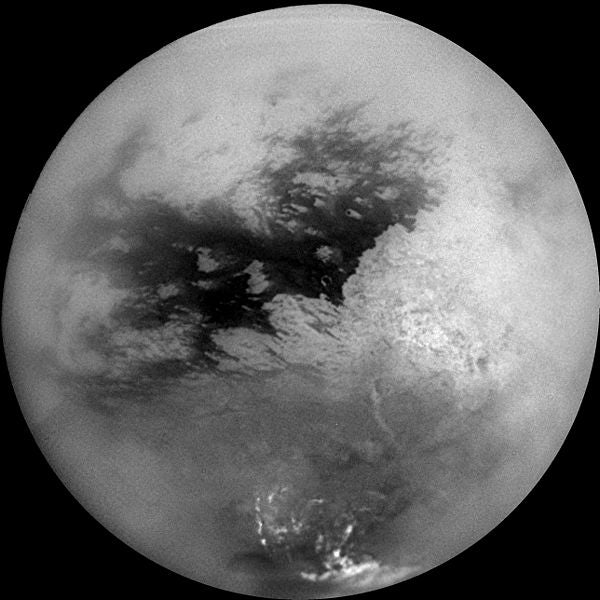 Along with methane lakes and ice volcanoes, Titan’s bizarre features could include a massive subsurface ocean similar to that of its cousin moon, Europa.

In an interesting twist, this could be one explanation for what’s been replenishing the Saturnian moon’s methane — maybe it’s not life, but a vast ocean of hydrocarbons that occasionally burps to the surface.

By crunching data from the Cassini mission, scientists have determined Titan orbits Saturn in a similar manner to our own moon — it always presents the same face toward its host planet, and its axis is tilted by about 0.3 degrees. This suggests Titan is more dense at its surface than at its core.

This does not make much sense, unless you consider that Titan might not be solid. Researchers at the Royal Observatory of Belgium in Brussels say the data work out if Titan has a huge ocean under an icy crust.

They performed their calculations assuming it was a watery ocean, not a methane one, because of some assumptions about the ocean’s depth and how thickly it could be covered in ice. Technology Review’s arXiv blog notes that this is an odd choice, given the prevalence of hydrocarbons on Titan.

This is not the first group to posit that Titan has an ocean of liquid water beneath the surface. Back in 2008, scientists studying Titan’s surface features noticed that things were drifting around, shifting from their expected locations by as much as 18 miles. That could be explained if a watery layer was sandwiched between the icy crust and the moon’s core, lubricating the crust and allowing it to drift.

At that time, scientists theorized such an ocean would consist of liquid water and ammonia, buried about 60 miles beneath the surface. This new study suggests a water ocean, buried beneath a thick crust of indeterminate depth. Several variables make it difficult to determine the ocean’s characteristics, according to the authors.

They also note that the moon’s odd orbital behavior could also be the result of some other disturbance, like a passing asteroid, and not a liquid interior. More calculations and probably further data would be needed to refine this theory.

Still, it’s an interesting study for its other Titanic implications. If the calculations hold up in the case of a methane ocean rather than a water one, that could help explain the persistence of surface-level methane. The hydrocarbon ought to be broken down by sunlight, but it’s mysteriously replenished. Granted, that would be a lot less fun than the idea of hydrogen-breathing, methane-exhaling Titans.