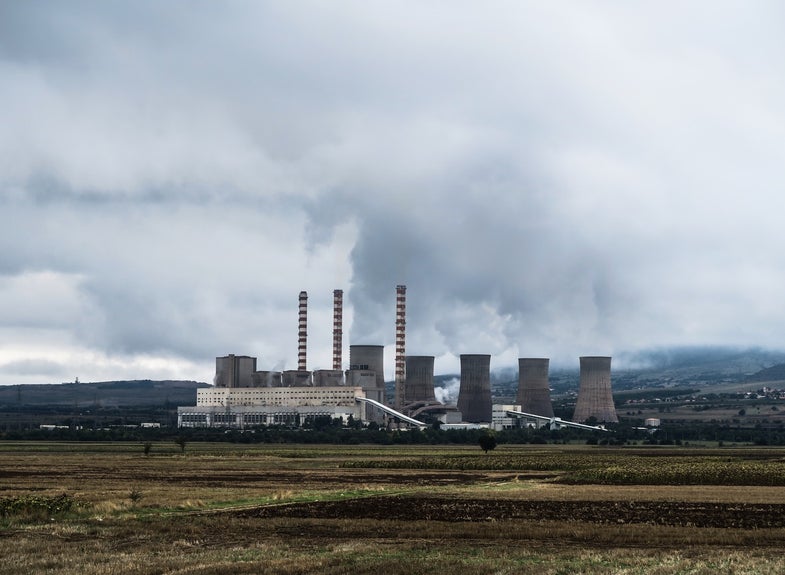 Summer smog may be getting worse because you can’t take the heat, according to a study released today in the journal Environmental Science & Technology.

Researchers have long known that ozone—smog’s main ingredient—is incredibly sensitive to warmer temperatures, which speed up chemical reaction rates, alter weather patterns, and sometimes trap pollution in place. At the same time, we know intuitively that on hotter days we tend to turn our air conditioners up, using more electricity.

“But it had kind of been bothering me that nobody looked at how energy use on hot days also contributes to ozone,” said study author Tracey Holloway, a researcher at the Nelson Institute for Environmental Studies at the University of Wisconsin-Madison. “How do you control air pollution on the dirtiest days? And how much are our power plant emissions changing when we have those hot chemically reactive days?”

To find out, the study authors looked at historical data made available through the Environmental Protection Agency’s (EPA) Clean Air Markets Database. The database reports the amount of energy generated at each of the nation’s power plants, along with measurements of carbon dioxide (CO2), nitrous oxide (NOx) and sulfur dioxide (SO2) they emit.

These chemicals are have a serious impact on human health and the environment. Power plants emit nitrogen, which becomes nitrous oxide (NO) and nitrogen dioxide (NO2) in the atmosphere, though for simplicity scientists refer to the nitrous compounds simply as NOX. NOX is thought to trigger asthma attacks and other respiratory illnesses. It also forms nitrate particulate, which is known to cause respiratory and cardiovascular problems—like heart attacks. Nitrogen dioxide also reacts in the atmosphere to form ozone, which is bad for respiratory health as well. Sulfur dioxide has similar health effects. Carbon dioxide helps trap heat, contributing to the effects of global warming.

Holloway’s team compared that data with a temperature dataset called the North American Reanalysis Database (NAR) which is made available by the National Oceanic and Atmospheric Administration (NOAA). By running an analysis on the two types of data, they were able to determine how much emissions have changed over time, and tease out the impact of hot weather on power plant activity.

They discovered that since 2003, all three of the emissions they studied have declined. “They’ve been decreasing because we’re investing as a country in putting emission control devices on top of power plants,” said Holloway.

That’s the good news. The bad news is that our understanding of the health implications of these kinds of particulate matter has grown in recent years—and levels of pollution that were once deemed acceptable are now known to be too high. More than half of Americans still live in counties that are unhealthy according to the National Ambient Air Quality Standards set under the Clean Air Act.

How does temperature factor into that pollution?

“We found that power plant emissions definitely go up on hotter days, and some parts of the country are more sensitive to this temperature impact than others,” said Holloway. “The main driver of this hot weather connection with power plant emissions is building air conditioning use.” Emissions in the northeastern United States in particular seem to be linked to temperature changes.

Overall, the power plants in the northeast have some of the lowest emissions. But when the temperature gets hot, emissions increase significantly— around 3.5 percent for every degree celsius increase.

By contrast, Texas—which has some of the highest rates of emissions under normal conditions—doesn’t seem to flinch at the summer weather. Emissions only increase around one percent for every degree Celsius increase in temperature. So while places in the northeast might be able to further reduce their emissions by targeting the causes of summer spikes, Texas would be better off focusing on decreasing its year-round emissions—curbing any increase due to summer demand would have a small effect.

Pinpointing the exact reasons for seasonal emissions spikes will be the subject of a future study. It could be that these regions turn on much dirtier, rarely used power plants to meet increased summer demand. The increase could also be related to the fact that gas plants are as much as 12 percent less efficient in warmer weather.