Hospitals are scrambling to solve their air pollution issue

A single mid-size hospital contributes the same emissions as 1,200 cars. 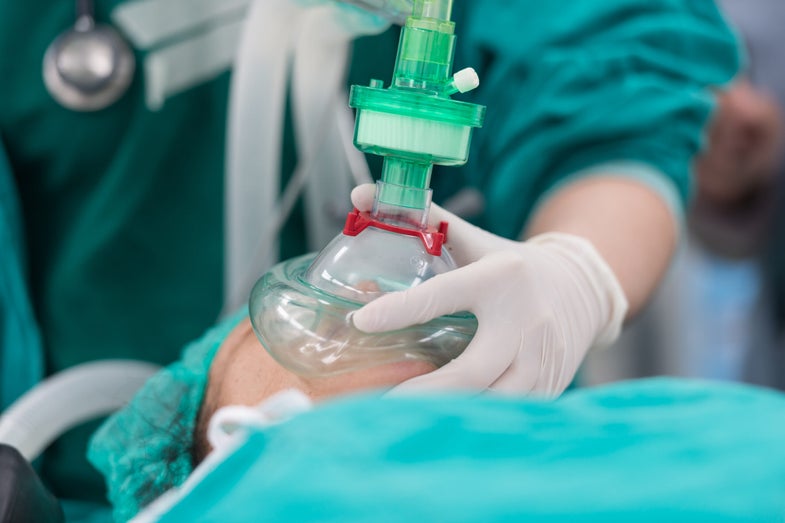 The anesthesia one mid-size hospital uses in a year contributes the same emissions as up to 1,200 cars. Deposit Photos
SHARE

Ask Jodi Sherman to identify a culprit in global climate change, and you’ll get an unexpected answer. The anesthesiologist from Yale University doesn’t name the usual suspects—carbon dioxide, like the kind that spews out of our cars, or methane, the gas packed into every cow burp. Instead, she points a finger at anesthesia, the tool most essential to her trade. “And it’s just being released into the atmosphere with no control,” she says. Carbon dioxide is perhaps the most famous climate-changing chemical, but some of the gases used to knock people out in the operating room are many times more potent. Between sedation for surgeries, manufacturing medical supplies, and keeping the power on in hospitals, the medical sector is responsible for quite a few emissions. In the United States, 10 percent of all greenhouse gas emissions come from the healthcare system. And in the United Kingdom, the National Health Services estimates that anesthesia alone accounts for around 5 percent of the carbon footprint of the health care system. While no doctor would ever suggest performing, say, open heart surgery without anesthesia, many are taking steps to mitigate the effects of the drugs they use.

Hospitals in the United States primarily rely on four anesthetic gases: nitrous oxide, sevoflurane, isoflurane, and desflurane. These gases don’t undergo any chemical changes when they’re inhaled and exhaled—they go out in almost the same form they came in, before being sucked out of the room through a vacuuming system and vented out into the air.

In more concrete terms, the anesthesia one mid-size hospital uses in a year contributes the same emissions as up to 1,200 cars. Eight hours of desflurane anesthesia equates to around 116 days of auto emissions, while isoflurane and sevoflurane, which are less potent, equal between five and 10 days.

The Occupational Safety and Health Administration has recommendations in place to reduce exposure to the gases inside of the hospital or operating room, but in the United States there aren’t any regulations on how much of these gases a building can emit. Anesthetic gases aren’t a part of the Paris Climate Accord, an international agreement aiming to mitigate global warming. Even though it contributes to the destruction of the ozone layer, nitrous oxide wasn’t included among the substances regulated under the 1987 Montreal Protocol, a United Nations treaty limiting ozone-depleting substances.

Sherman, a professor of anesthesiology and director of sustainability for the department of anesthesiology at Yale University, thinks these gases are often exempt from sustainability conversations because they’re considered medically necessary—nitrous oxide and isoflurane are both on the World Health Organization list of essential medicines. However, Sherman says, alternatives to those medications exist. “There is room for agreements and regulation around these drugs,” she says.

In the absence of formal regulation and oversight, and as awareness around the global warming potential of anesthetic gases grows, a handful of hospitals across the country are working to make their anesthesia use more environmentally friendly.

Yale-New Haven Hospital, where Sherman works, stopped using desflurane, largely as a result of her research on its climate impact. “Not only does it have the highest global warming potential,” Sherman says, “but it’s also the most expensive drug. It’s an easy argument to make from a business perspective, let alone an environmental perspective, to get rid of it.”

The health care group Kaiser Permanente saw desflurane use drop by almost 60 percent in its Northern California region after educating physicians and anesthesiologists about its environmental impact. “Our goal in the next few years is to eliminate it completely,” says Alan Zneimer, chair of the chiefs of anesthesia for Kaiser Permanente in Northern California. Decreasing usage doesn’t change anything medically, Zneimer says, because there’s not much difference between desflurane and sevoflurane, which they still use.

“I personally never use desflurane,” Zuegge says. “But we wanted to maintain the choice, because some providers feel strongly about it.”

At the University of Wisconsin, containers holding the various anesthetic gases are prominently labeled with their global warming potential. Since the labels were introduced, Zuegge says the hospital has cut about 4 million kilograms per year of carbon dioxide-equivalent emissions—comparable to removing almost 900 cars from the road. Anesthesiologists were less wasteful in their use of the gas, Zuegge says, and more thoughtful in choosing a drug in the first place. Zuegge has submitted the data for publication in the journal Anesthesia & Analgesia.

“We have a tendency to be wasteful,” Sherman says. “We’re a rich culture, we don’t tend to think about the cost of things, and we’re ignorant of the environmental impacts.”

But there’s also a financial benefit to reducing waste: the University of Wisconsin saved about $20,000 per month. Yale-New Haven Hospital saved hundreds of thousands of dollars a year by eliminating desflurane.

Anesthesiologists are also de-emphasizing nitrous oxide in the operating room, where it’s easy to avoid, Sherman says. But in dental offices and labor and delivery wards, which typically don’t have formal anesthesiologists, the gas is still common. “Is being used by non anesthesia-providers in a safe way for a long enough time, and they can’t substitute one inhaled gas for another. They don’t really have a good alternative.”

But in the operating room, inhaled anesthetic gas can often be replaced. Sherman doesn’t think gas can disappear entirely, but in some cases, doctors can opt for intravenous anesthesia or a local anesthetic instead.

Efforts toward sustainability can’t come at the expense of the best possible patient care, but Sherman says greening up anesthetic practice doesn’t involve medical sacrifices. In most cases, multiple drugs will have the same effect, and the patient won’t know the difference of one over another.

“Unless someone is urgently requiring care, and you don’t have time to think, we frequently have choices in care that we give,” Sherman says. When you have a choice, she says, it’s important for anesthesiologists to weigh the environmental impact. “It’s not the only decision factor, and it’s not the first decision factor, but it needs to be one of the things that we think about.”

The biggest roadblock to transitioning to more sustainable practice, Zneimer says, is moving anesthesiologists away from the way things have been done in the past. “Sometimes trying to do something new or different is a little scary,” he says.

For Zneimer, easing off the gas makes medical sense, too. “People seem to have less postoperative nausea if we can avoid it,” he says. “That’s good for the environment, and good for patients. We really are looking at anesthesia overall to see what is the best and safest way to do it.”

The solutions to reducing emissions, Sherman says, are clear. “Avoiding nitrous oxide when possible, maximising the use of intravenous and regional anesthesia, and paying close attention to waste. We know what we can do. It’s just a matter of laziness.”

Aside from switching methods and reducing waste, a feasible way to cut down on emissions from anesthesia would be to scale up technologies that trap and destroy gases after they’re exhaled, Sherman says. In Sweden, for example, many maternity wards are outfitted with devices that capture the nitrous oxide used in labor and delivery, but such methods aren’t in use in the United States.

Gas destruction is also theoretically possible for sevoflurane, isoflurane, and desflurane, said University of Copenhagen chemist Matthew Johnson in an email. Johnson built a prototype that uses light to destroy anesthetic gases, and believes the method could scale up for use in medical settings.

In the United States and Canada, multiple groups have developed systems that can catch, clean, and recycle anesthesia for future use. The method developed by James Berry, an anesthesiologist and Anesthetic Gas Reclamation, Inc founder, uses condensation to recapture used gas. The device cools down the anesthetic to return it to a liquid phase, which can be stored in metal drums. The company distills the liquid back out into pure forms of the original drugs, which Berry says could be resold and reused.

However, the system isn’t in active use anywhere, largely because the Federal Drug Administration hasn’t approved the use of a recycled anesthesia—or of any recycled pharmaceutical, for that matter. Berry met with the FDA around four years ago, and he says that they were receptive to the idea. “They’re willing to listen, but they want incontrovertible proof that it isn’t contaminated.”

Berry thinks the holdup is because of what he calls the “ick” factor—the gas they’re trying to reuse was once deep in the lungs of a sick person. “But we can show scientifically that the recycled stuff is pure, no dead bodies, no viruses,” Berry says. “Distilling means you take one molecule out at a time and put it into another container. The process itself ensures you’re pretty good, and we test it afterward.”

Blue-Zone, a Canadian company, has outfitted around 25 percent of Ontario operating rooms with their anesthesia recapture system, and company president Dusanka Filipovic says they’re expanding across the country and into the United States. Blue-Zone collects canisters full of recovered gas from hospitals, processes and purifies the product, and uses it as raw material to manufacture generic anesthetic.

Right now, all the newly manufactured gas is stored as inventory, Filipovic says. According to the Blue-Zone website, the company will be able to start marketing and selling their anesthetics once they’re approved for use.

The goal, Filipovic says, is to create a sustainable and secure supply for these drugs, and to mitigate emissions in a sustainable way. “There are only a few manufacturing sites for these drugs in the world,” she says. “Wasting them isn’t good, and these are toxic compounds.”

Anesthetics are a billion-dollar industry, and these technologies also have the potential to turn a profit. “We’re trying to do a really good thing, which is save the environment, and have a financially viable business,” Berry says.

But even if recycled anesthetic is approved for medical use, the start-up cost to install the systems is a significant roadblock. Berry’s units cost around $50,000 each, which would be a significant burden for a hospital to bear. Sherman says that’s the main barrier to mitigating the effects of anesthesia through recapture or destruction. “Unless a facility is highly committed, and unless it’s mandated, they’re not going to do it,” she says.

Still, Berry is optimistic. He’s still in contact with the FDA, and although things move slowly, he thinks recapture will be online within a decade or so. “We’ll do it,” he says. “It takes a generation to do anything big.”