Find out where your town’s air pollution actually comes from

It goes any way the wind blows. 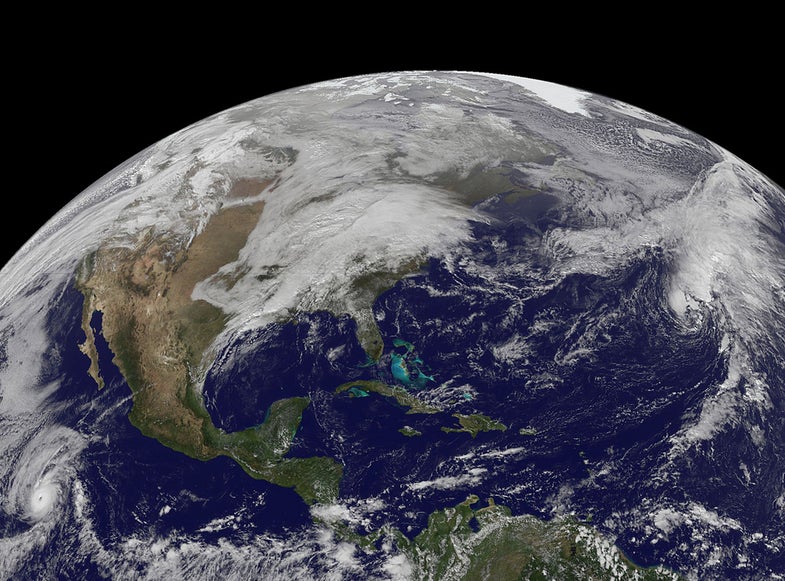 Every morning on my walk into the PopSci offices, I can feel my lungs working hard to process that infamous New York City air. The requisite levels of oxygen and nitrogen are there, sure, but they come with mouthfuls of bus exhaust and cigarette smoke. And according to a new lawsuit, every inhalation probably includes a minuscule amount of ozone pollution. Unlike the rest of this Manhattan-made haze, however, that ozone is actually coming from out of state.

On January 17, New York’s Attorney General Eric Schneiderman and his Connecticut counterpart George Jepsen announced their states are suing the Environmental Protection Agency (EPA) for failing to regulate ozone pollution in other states. Under the Clean Air Act’s “Good Neighbor” provision, which sounds like it was named by Mister Rogers himself, the federally-operated EPA must hold states accountable for pollution that crosses state lines. New York and Connecticut allege that ozone and other smog particles have been blowing in from Illinois, Michigan, Pennsylvania, Virginia, and West Virginia, potentially jeopardizing the health of millions.

The outcome of this particular case is yet to be determined, but according to atmospheric and environmental scientists, the scientific phenomena that underlies that “good neighbor” rule is real—and really important for human health. It seems that when we made our orderly little maps and start crafting law and policy to enforce them, Earth’s atmosphere wasn’t really paying attention.

Noelle Eckley Selin is a researcher at MIT and an expert in atmospheric chemistry and air pollution. When it comes to transboundary air pollution (the technical term for pollution that crosses municipal, state, or even national lines), Selin says, “The key thing we’re worried about is how long the pollutants last in the atmosphere.” Air pollution constantly pours out of our cars, our homes, and our factories. But most of it dissipates in the atmosphere, keeping the effects local. Some, however, can last days or even weeks. With the right winds, those pollutants can hit the open road.

Two long-lasting pollutants are ozone (the subject of the current lawsuit) and mercury. Ozone is formed when oxides of nitrogen, like those formed by gasoline combustion, and volatile organic compounds, like those from varnishes or cleaning chemicals, mix in the atmosphere. These so-called ozone precursors—and the ozone they make when they mix together—can swirl around the atmosphere for several days, giving the pollution plenty of time to move from, say, Virginia to Connecticut. Mercury, which is often released into the atmosphere from mining and power plants, can hang around for six months to a year, allowing it to move between the northern and southern hemispheres.

The lifespan of a given pollutant is just half of the equation, however. Transboundary pollution only becomes transboundary when prevailing winds push a polluted parcel of air into new territory. In the United States, air currents tend to sweep from west to east. That means pollution from the middle of the country, like Illinois or Texas, often ends up in Eastern states like New York or Connecticut. Of course, that doesn’t mean the opposite can’t happen; inland states have also been inundated with pollution from the East.

There’s boundary-pushing pollution elsewhere in the United States, of course, but according to Jason West, an environmental scientist at University of North Carolina Chapel Hill, the majority of disputes are concentrated near the Atlantic seaboard. “In the East, you have several states that are all fairly small, affecting one another,” he says. “There is pollution transfer in the West, but it’s considered to be less important, because you have space and the [lower] population density such that it’s not as noticeable.”

Noticeable or not, West says air pollution can have serious effects on the human body. Depending on the amount you inhale and how long you’re exposed, ozone can cause everything from coughing and throat irritation to asthma and chronic obstructive pulmonary disease (COPD). Mercury, meanwhile, can cause developmental problems in children, including cognitive delays and diminished fine motor skills.

This atmospheric circulation—and the public health concerns associated with it—is replicated at the international scale, too. Thanks to those easterly winds, air pollution from the United States can make it all the way to Europe. European air pollution then blows through the Middle East and Asia. And, like a snake eating its tail, Asian air pollution can blow across the Pacific, back into the Western United States. In recent years, nations have worked together to study this problem and create rules to manage international pollution, but there’s still work to do. Ultimately, Selin says, we need to better match our regulations to the realities of our planet.

Those efforts have to start with each of us acknowledging our contributions to this swirling mess. In some cases, it really could be true that the exhaust pipe of some truck in West Virginia is responsible for the smog I’m inhaling in Manhattan. More likely, however, is that the tail-end of my own inner-city car ride is to blame. While the interconnectivity of the world’s winds can clearly carry certain atmospheric hitchhikers, most air pollution is made—and stays—local. To combat ozone, mercury, and other of the dozens of deleterious compounds in our air, we have to take responsibility for the things we do to make our own air less breathable. In doing so, we’ll probably find we also help others who share our breeze.