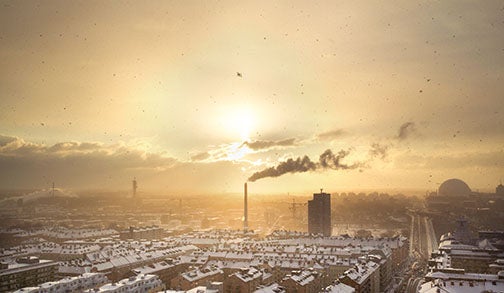 Air Pollution kills. A study released yesterday in the journal Nature found that in 2007, air pollution lead to the premature deaths of 3.45 million people worldwide—a number equivalent to the population of the state of Connecticut. And to add insult to injury, air pollution doesn’t respect borders.

Twenty-two percent of the deaths were linked to pollution created by products consumed elsewhere. For example, a significant percentage of the deaths in China were caused by air pollution released while creating baubles later bought and sold in the West.

“Air pollution can travel long distances and cause health impacts in downwind regions,” said study co-author Qiang Zhang, a researcher at Tsinghua University, Beijing. “Our study revealed that international trade has greatly extended the distance of such impacts by separating the locations of consumption and production.”

Being located outside of the most heavily polluted regions offers no respite, because pollution migrates. The study found that roughly 12 percent of premature deaths were caused by pollution released somewhere else in the world. Similarly, a 2014 study found that China’s pollution contributes to California’s smog.

“Previous research believed that pollution was a local issue and did not require global efforts,” said Dabo Guan, a researcher at Tsinghua University and a co-author on the study. “My point here is that we’re a globally connected, intensively connected world. No one has a way out of the impact, because we are either producers or consumers. Sometimes we are both.”

What makes pollution so harmful is something called PM 2.5. PM stands for particulate matter, a complex mix of liquid droplets and small particles created when we burn gasoline in cars, or when we fire up a coal power plant to make electricity. The notation 2.5 is a reference to the size of the particles—2.5 microns.

Roughly 40 times smaller than the smallest grain of beach sand, PM 2.5 are small enough to slip inside our airways as we inhale, lodge in our lungs, and take a ride on our cardiovascular system. As a result, they can cause a host of health issues, including the deaths tracked in the study. In fact, although much of the conversation around the Clean Power Plan—which President Trump rescinded on Tuesday by executive order—has focused on greenhouse gas emissions, the plan would have also significantly reduced PM 2.5 pollution, saving as many as 3,600 lives by 2030 and reducing childhood asthma attacks by 90,000.

Since 2013, China has been working to clean up its act and has reduced pollution emissions by six or seven percent according to Guan. But even as one emissions giant is reducing, another is increasing. India is burning more coal than ever. Unless we can come to a global consensus about pollution, there will always be someone leading the race to the bottom.

“If you’re somewhere in Asia, where your economy has developed by making a lot of goods for developed countries elsewhere, and you’re thinking that the health impacts of the pollution are a negative impact on your society, which of course they are, cleaning up is not just a simple matter,” said Steven Davis a researcher at the University of California, Irvine and a co-author on the study. “Because they’re obviously concerned about potential impacts on their economy. If they decided to drastically clean up their economy, some other country would step up and say, we’re willing to have our people die to have that business.”

“This is why it’s a complex issue where we need to have some global governance,” added Davis. “This is how you solve the tragedy of the commons—you have someone actually minding the store.”