Scientists now think it might put young brains at risk. 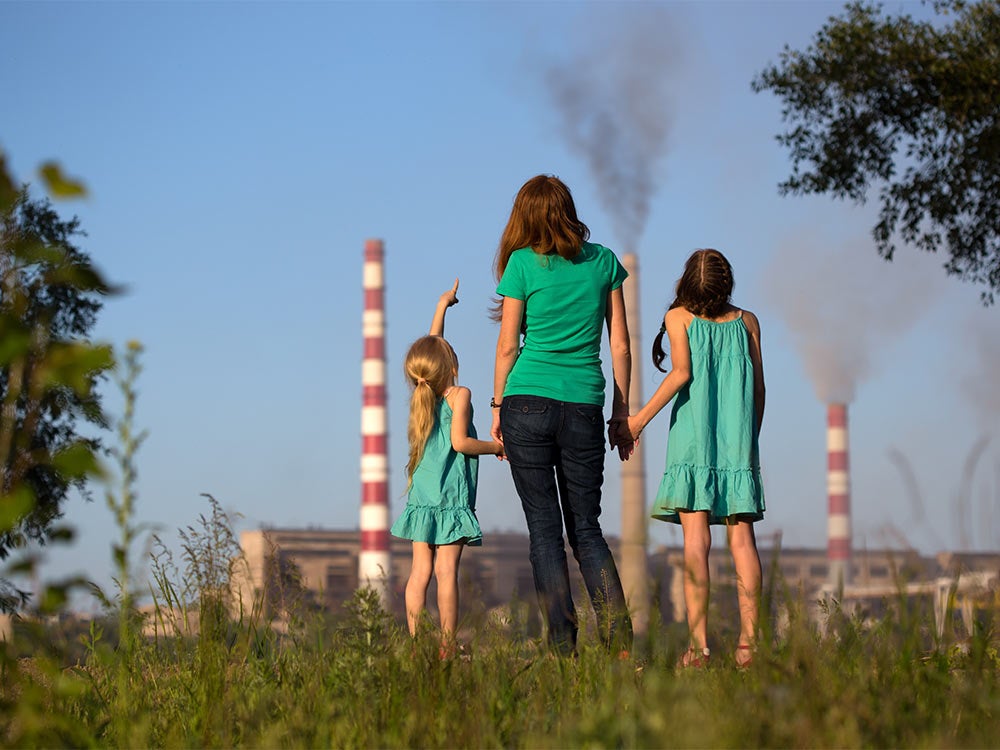 Sometimes air pollution is easy to see. It billows off the top of smoke stacks, and out the tailpipes of cars zooming down the highway. Misty smog hangs in the air in cities like Delhi, Beijing, and Los Angeles, fracturing sunlight into a muted haze.

Most of the time, though, dirty air just looks like air. About 92 percent of the world’s population, and more than half the people in the United States, live in areas with unhealthy air quality. The World Health Organization calls air pollution the world’s “largest single environmental health risk,” and it leads to the premature deaths of millions annually. It’s a major public health problem for reasons you might expect: breathing in dirty air isn’t good for your lungs, and the the connection between the lungs and the cardiovascular system means it puts pressure on your heart, too.

But it’s increasingly clear that the effects of air pollution aren’t constrained to body parts below the shoulders—they can hurt the brain in a whole host of ways, many of which researchers are still trying to understand. One major area of interest? The way exposure to polluted air can affect the cognitive development of babies and children. Researchers aren’t shocked to find that an environmental toxin could harm young brains, because they’ve seen it happen before.

“To me, air pollution is kind of the next lead, in a way,” says Deborah Cory-Slechta, a professor of environmental medicine at the University of Rochester.

Lead was everywhere throughout the start of the 20th century, readily used to make vacuums and paint and included as an ingredient in gasoline. It was known to be toxic, and concern over its health effects spurred fights for regulation, but it wasn’t until the 1980s that researchers linked even low levels of lead exposure to an increased risk for cognitive and behavioral problems in children—just as scientists are starting to do for air pollution now.

Pollution on the brain

Cory-Slechta actually started out studying the effects of lead exposure, and she was skeptical when she first heard air pollution might pose similar dangers. But when a research group at her university, which was studying air pollution and lung development, asked if she was interested in taking a look at the brains of the mice used in their studies, she figured she might as well take a look.

She was shocked to find evidence of inflammation and damage in pretty much every area of the mouse brains. “And this was a full two months after the exposure to air pollution had ended,” Cory-Slechta says.

Living in areas with high air pollution has been linked to poorer memory, attention and vocabulary; to below-average performance on intelligence tests; and to delinquent behavior. Air pollution has also been implicated in developmental disorders ranging from attention-deficit hyperactivity disorder to autism spectrum disorders.

Animal studies, where researchers can more strictly control the pollution exposure, back up the results from those human reports. They show that air pollution causes changes in behavior in rodents, and changes in their brains, like imbalances in the levels of certain molecules, hyperactivity in brain regions, and damage to neurons—many of which correspond to the way neurodevelopmental diseases look in these animals. The widespread inflammation seen in mouse brains after air pollution exposure, like Cory-Slechta observed in her initial studies, can damage neurons, and, during development, prevent the brain from organizing itself properly.

Although the research isn’t far enough along to draw an explicit, causative link between air pollution and developmental changes in humans, there’s a strong association between the two, strengthened by the accompanying research on animals. “We have a pretty good correspondence between the epidemiology studies in humans and the animal studies,” Cory-Slechta says.

The particles in the air get into the body and into the brain through a few different pathways: they can pass through the lungs and into the bloodstream, where they can travel up to the brain directly, or cause changes in the body’s immune response that trigger damaging inflammation. There’s also only a thin barrier between the nasal cavity and the brain, and tiny particles of air pollution can pass directly through.

Still, there’s a lot we don’t know about the mechanisms behind the effects of air pollution. It’s a slurry of different types of particles, of different sizes and from different sources. Some of the largest are about a tenth of the width of a human hair—big, on a microscopic scale, but still small enough to travel into the lungs. Others, known as ultrafine particles, are on the nanoscale. Pollution is made of nitrogen dioxide and ozone, and it might also have microscopic pieces of metals like zinc, tin, or even lead. The composition can change neighborhood to neighborhood, block to block, and hour to hour.

“The toxicity is different depending on the particular soup that you’re in,” says Rosalind Wright, who studies environmental medicine and public health at Mount Sinai.

One of the main challenges faced by air pollution researchers, then, is untangling the types of particles that could be the most dangerous from those that might be more benign. “Any step in that direction, looking at some components versus others, is going to be valuable,” Wright says.

We also don’t know much about the windows during development when the effects of air pollution might have the greatest impact. Maternal exposure to air pollution can affect fetal development, for example, and exposure during infancy and the first few years of life can harm children as well. But it’s not clear when the most damage actually occurs. Then there’s the question of dosage. Air pollution shifts around, and exposure can spike when people enter different environments—like driving through a tunnel on the highway. The difference between that type of extreme, temporary exposure, and long term, ambient exposure, are still muddled, as well.

The Environmental Influences on Child Health Outcomes (ECHO) program, run through the National Institutes of Health, will hopefully produce new, robust data to help answer those questions, Wright says. The program aims to enroll 50,000 children and track, among other things, neurodevelopment and environmental exposures. “That initiative will take a big step forward in this area,” she says. “Hopefully, it will drive policy in the long run.”

One thing we do know about air pollution is that there’s more of it in low income communities and in communities of color. Racial and ethnic minority children in the United States are more likely to attend schools in highly polluted areas, and across the world, low income areas have higher concentrations of air pollutants.

Racial and ethnic minority children, and children in low-income areas, may also be more strongly affected by the air pollution that they’re exposed to. That’s because dealing with social stressors, like food insecurity or institutionalized racism, might compound the effects of environmental stressors like air pollution on their neurological and cognitive development.

“Studies show that if you don’t have stress concurrently with air pollution, you won’t necessarily see strong effects,” Wright says. That means, she says, that tackling some of those social problems might be one way to mitigate the harmful effects of toxic air. “It’d be interventions short of saying, change the air.”

The same patterns hold true for lead exposure—which disproportionately affects minority and low income communities, and is exacerbated by stress. Similarly, an enriched, non-stressful environment, can protect against lead-driven damage.

Unlike lead, though, knocking out the root of the problem isn’t as simple as removing one ingredient from paint and gasoline (which is complicated enough, and the United States is still struggling to keep up).

The problem with air pollution, Wright says, is that it’s so ubiquitous. Air quality is improving across the United States, even while in poor cities around the world, pollution levels are going up. But we still don’t know how low pollution actually needs to be to stave off developmental effects, Wright says. “Even at the cutoff levels where we have regulations on the quality of air, it can still be toxic.”

The United States, under the Clean Air Act, also only measures certain types of particles found in air pollution—the Environmental Protection Agency (EPA), for example, does not have standards for the levels of ultrafine particles, which may have their own unique host of health effects. Improvement on only the measures that we can see, Cory-Slechta says, doesn’t necessarily mean we’re making progress on all types of air pollution.

What’s more, EPA Administrator Scott Pruitt has taken steps to weaken or remove existing regulations around air pollution over the past year. Pruitt is also restructuring the way that the EPA uses scientific evidence to form policy—the agency will no longer consider research that was done with confidential data. A significant body of air pollution research uses medical records (which remain confidential under ethical guidelines) including studies on childhood development. That decision would help justify any EPA decisions to ease regulations on emissions from chemical plants or factories, and they would be able to disregard evidence showing that it harms kids.

Lead research bumped up against similar challenges from various industries that used the metal in their products, who fought against regulations and attempted to cast doubt on the scientific research.

Despite the challenges, the path forward in the fight against air pollution is made easier by the precedent set by lead.

“The struggle over lead was the poster child for these issues, and it broke down some barrier,” Cory-Slechta says. “At that point in time, early on, there was study after study just to try and get people to believe that lead exposure was associated with changes in IQ.” It’s common knowledge today, but when the research was ratcheting up in the 1990s, people were reluctant to acknowledge that it was a neurotoxin, she says.

“A lot of those fights got fought over lead,” Cory-Slechta says. “Now, when you say that there are behavioral effects of air pollution, no one questions it. So we’re able to move faster, and we’re a lot further along.”