Algae blooms in lakes and oceans generate pollution that harms people, pets, and the planet. 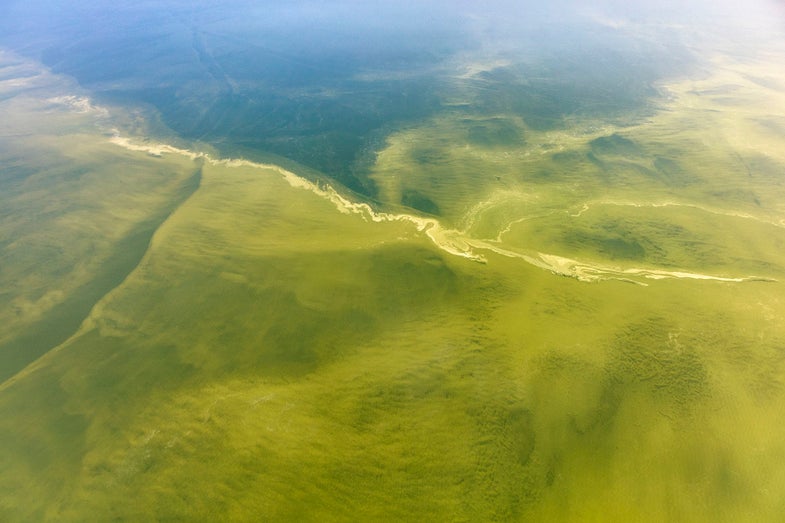 Aquatic ecologist John A. Downing happily remembers childhood holidays at his family’s vacation home at Wabana Lake, near Grand Rapids, Minnesota. The lake was upstream “from almost everything,” making it difficult for pollution to reach it, he said. But some eventually got there anyway. “It’s still beautiful, but somewhat greener around the edges,” he said. “I have been diving in these lakes since I was 9 years old, and as I get older, I notice there are more frequent surface algae blooms.” Algae blooms are a serious problem for lakes, rivers, streams, and seas around the world. Farmers use fertilizer to grow crops, and fertilizer runoff empties into waterways, flooding aquatic ecosystems with phosphorus and nitrogen, nutrients that support the growth of algae. Warmer waters, a consequence of climate change, are also nurturing the growth of algae. When algae proliferate, they gobble up oxygen in the water, leaving little leftover for other marine life. This has produced dead zones in some areas, like the Gulf of Mexico. Algae also can be toxic to both humans and land animals exposed to it. Downing, in fact, has seen “too many instances in which pets have lived less than 48 hours after drinking green water,” he said. “Algae is never good.”

But the overall situation is even worse. Beyond the personal dangers of lake swimming or fishing, and drinking the water, these blooms — on a global scale — also are terrible for the planet. They release powerful greenhouse gases into the atmosphere, including methane and nitrous oxide, which help drive climate change. As climate change heats up waters, more algae grow, producing more heat-trapping gases. As water heats up, water molecules move further apart, allowing more molecules of methane and nitrous oxide to wiggle free and escape into the sky.

“These green lakes are another reason — if we need another reason — to keep water clean. Polluted waters increase greenhouse gas emissions that exacerbate climate change,” said Downing, director of the University of Minnesota’s sea grant program.

“If you push a stick into a pond, or a canoe paddle or a boat oar into the bottom of a lake, you likely have seen bubbles coming to the surface,” he added. “The bubbles are gases that cause problems in the atmosphere. These gases increase when lakes get greener and more polluted with fertilizers and sewage. Keep in mind that lakes in urban settings, where the water is often noticeably green, are also losing greenhouse gases.”

Downing, and his colleagues — Tonya DelSontro, a researcher at the University of Geneva and Jake Beaulieu, a biologist with the Environmental Protection Agency — recently studied the relationship of lake algae to the release of greenhouse gases. The researchers concluded that at the current rate, the atmospheric impact of carbon dioxide, methane, and nitrous oxide from lakes and reservoirs is equal to 20 percent of the carbon dioxide emissions from burning fossil fuels. Their study appears in the journal Limnology and Oceanography Letters.

“Our work shows conclusively that methane, which is emitted from lakes in bubbles, is the dominant greenhouse gas coming from lakes and surface waters globally,” DelSontro said, explaining that the greener waters become, the more methane is emitted. More fertilizer runoff and rising temperatures are set to make waters much, much greener.

Scientists examined published data on emissions from more than 8,000 lakes and reservoirs in 54 countries and found that those with more algae tended to produce more greenhouse gas emissions. Larger lakes produced enormous sums of pollution. “When methane and nitrous oxide emissions and their atmospheric warming effects are considered — which are greater than carbon dioxide — then Lake Erie emits 18 times more carbon dioxide than all the cars in Detroit,” she said.

Downing said the same is true for many Iowa lakes. “I have many family acquaintances in Iowa who no longer swim in green lakes. You need only to look at places like Clear Lake, Iowa — where Buddy Holly, the Big Bopper, and Richie Valens played their last dance, and where the water was once clear — to see that things have changed. Clear Lake is a wonderful community. When it turned green and had too much algae a few decades ago, they remembered the reason for the ‘clear’ name and are working with Iowa government officials to try to bring back clean water for recreation.”

Methane traps far more heat than carbon dioxide, but does not remain in the atmosphere as long — tens of years compared with hundreds of years, according to DelSontro. “What that means is that if we can reduce methane emissions, then we have a stronger, more immediate impact on climate change in our lifetime,” she said. “It takes a smaller amount of methane reduction to have the same effect as a larger reduction in carbon dioxide emissions.”

A decade ago “lakes and other inland waters were totally ignored in climate change projections,” Downing said. Research since conducted by their team “has shown that inland waters are important in this equation,” he said. Fortunately, he explained, there is much that average citizens, farmers, cities, those in government and non-governmental organizations can do to make a difference.

“Unless you live under the sea, everyone lives uphill from water,” he said. “So, everything we do has an effect on the water downhill. We eat food that takes fertilizer to grow. We create sewage. We fertilize lawns. We walk our dogs. We let soil erode. We do all kinds of things that release phosphorus and nitrogen into water bodies. When the algae grow and water gets green, greenhouse gases are released. Everyone has a chance to help slow climate change by keeping the waters near them clear and clean — which is not a bad idea in and of itself.”