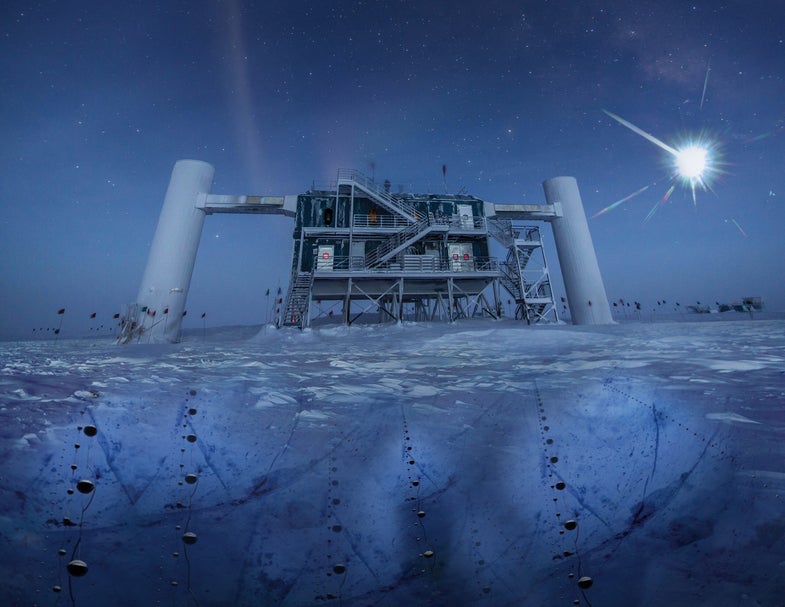 Ghost particles, otherwise known as neutrinos, are literally everywhere—trillions of them, each with barely any mass at all, are passing through your body right now. But we understand very little about how these particles work. That’s an absolute shame, since they might be key to explaining some of the biggest mysteries of the universe, including why there is a universe.

We just took a large step forward in answering those questions. In a pair of new papers published Thursday in Science, an international research team of hundreds announce they’ve discovered evidence of the origins of these tiny, elusive particles: giant, oval-shaped galaxies called blazars. The findings resolve more than a century’s worth of work in pinpointing what is thrusting subatomic particles like neutrinos as high-energy cosmic rays off through space.

“We have been observing cosmic neutrinos since 2013,” says Francis Halzen, a physicist at the University of Wisconsin-Madison and the lead scientist for the IceCube Neutrino Observatory that spearheaded the new findings. “We had no idea where they came from.”

The key to this latest discovery was in trying to figure out what other high-energy events neutrinos might be associated with. That’s where multi-messenger astronomy comes in: the study of astrophysical events through several different signals. For example, if you were trying to learn as much as possible about a dynamite explosion, you wouldn’t just make a recording with your phone. You’d want to make observations in different wavelengths of light, make audio recordings, and more. In astronomy, multi-messenger means observing signals relating to electromagnetic radiation, gravitational waves, neutrinos, and cosmic rays.

“Neutrinos point back at their sources,” says Halzen, “and so we were trying to associate their arrival directions with known sources, including blazers. This was not successful until we started this multi-messenger campaign.”

IceCube, a kilometer-sized telescope that sits under a mile of ice in the South pole, has been running since 2011, and has used its several thousand sensors to observe nearly 100,000 neutrinos a year. Its express purpose is to find neutrinos, near or far (and in the case of this latest observation, very far). It’s a powerhouse observatory for tracking elementary particles, but if we’re trying to connect neutrinos with other signals in order to find the origin point, we need to turn to other instruments for aid.

IceCube is equipped with an alert system that goes off when it detects extremely high-energy neutrinos. That alert system relays coordinates to other telescopes around the world and tells them to make follow-up observations.

For this investigation, IceCube found a really high neutrino event on September 22, 2017. NASA’s orbiting Fermi Gamma-ray Space Telescope and the Major Atmospheric Gamma Imaging Cherenkov Telescope in the Canary Islands were put on alert, and they ended up detecting high-energy gamma rays coming from a galaxy called TXS 0506+056—a blazar—about 4 billion light-years from Earth, located off the upper-left corner of Orion. The gamma-ray activity, some of the strongest ever detected by Fermi from that source, lined up incredibly well with the neutrino coordinates sent by IceCube.

Although blazars weren’t the expected source for neutrinos, they make sense when you realize how well they live up to their wicked-sounding name. “In active galaxies, the supermassive black hole powers two massive jets, which shoot outwards from the galaxy carrying high-energy particles and powerful radiation and magnetic fields,” explains Marcos Santander, a physicist and astronomer at the University of Alabama and a coauthor of the new studies. “Blazars are a kind of active galaxy where one of these jets happens to be oriented towards the line of sight of the Earth, meaning that we’re looking at the jet ‘down the barrel of the gun.’” This alignment means we can observe very energetic radiation sprawled across the entire electromagnetic spectrum, from radio waves, to visible light, to gamma rays—energies that, for blazars, peak at more than 10 trillion times the energy of visible light. “The strong shock waves along the blazar jet are known to contain high-energy particles capable of producing gamma rays and may accelerate cosmic rays,” he says.

These jets are responsible for accelerating cosmic rays, which are made of mostly protons. When protons interact with photons and hydrogen from the blazar or the black hole jet, they produce neutrinos. “So, neutrinos trace cosmic rays,” says Halzen. “They are tied at the hip.”

If we understand that neutrinos are produced alongside cosmic rays, then that means they must have the same source of origin as the cosmic rays themselves. “While the cosmic rays that we detect do not point back to their sources—because their electric charge and their path are distorted by magnetic fields—the neutrinos point back to the site where they were created,” says Halzen. “The neutrinos allowed us to pinpoint this source along with some twenty other telescopes.”

So that was the first piece of evidence the team needed. Once they knew TXS 0506+056 was the source of the September 22 neutrino detection, the researchers looked back at about 10 years of archival data, finding high-energy neutrino bursts coinciding with more than a dozen other flares emanating from that blazar in just a short span in 2014 and 2015 alone. This was the second piece of evidence. “This clinched everything,” says Halzen.

There is, of course, reason to be cautious about the findings. Blazars have long been a candidate source for emitting neutrinos, but previous studies trying to tie neutrinos to blazars fell short. It’s not totally clear why TXS 0506+056—which isn’t even the brightest known gamma-ray blazar—fit the bill when others could not. Blazars can’t yet be labeled wholesale as neutrino factories.

“I don’t think we’re in a position either to say ‘it’s all blazars,’” says University of Maryland physicist Erik Blaufuss, another coauthor of the papers. “I think it’s hard to draw too strong of conclusions about all blazers based on a sample of one. I think it’s still to be determined if this source is somehow special or just the first to ‘poke it’s head out of the grass’ and be bright enough in neutrinos for us to see.”

If high-energy action is key to explaining why blazars emit neutrinos, then we should pretty readily see the similar results arising from observations or starburst galaxies and gamma-ray bursts. If not, then it means there’s something much more specific and eccentric going on with blazars than we currently know.

And even if we just focus locally on this blazar itself, “this also certainly isn’t a gold plated discovery either,” says Blaufuss. Scientists typically use a 5-sigma threshold to label something as a “discovery,” And the analyses for both of these latest papers, according to Blaufuss, are 3-sigma, which signifies “evidence,” but not necessarily a discovery. A 3-sigma level still means you can allow for pretty high confidence the results aren’t due to random chance, but when it comes to particle physics, that sort of chance can still create wary feelings. It’s best to welcome the new findings with cautious enthusiasm.

For now, the team is also just basking in its hard efforts finally paying off. “Making a breakthrough on one of the oldest outstanding problems in astronomy is exciting,” says Halzen. “This is what IceCube was built for. That our first source is a blazar was somewhat surprising, but one cannot argue with facts.”