We'll admit that space dust is slightly less cool than an alien civilization. 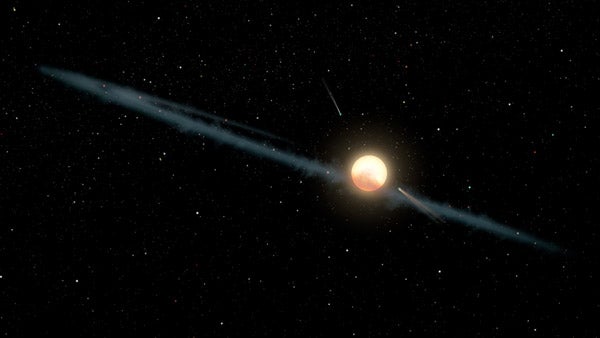 Three hundred and ninety parsecs away from Earth, a star dimmed in a weird way. Then it did it again. Astronomers wondered what the heck they were seeing, and speculation abounded, including the appealing possibility that it might be evidence of an alien megastructure.

But now a closer look, published in Astrophysical Journal Letters and authored by over 200 researchers, finds that the star’s dimming is more likely dust than anything else. Large, solid objects (like a hypothetical alien megastructure) would have appeared opaque to our ground-based telescopes. But instead some wavelengths of light were seen, consistent with dust.

“What is causing the shorter term punctuated dimming can’t be an opaque screen, it has to be something that changes the color of the system. It might be small particles of dust or effluent from disintegrating comets, but this really seems to rule out anything that is entirely opaque,” says Keivan Stassun, an astronomer who has studied the star before but was not involved in the new research.

If the things blocking out the star’s light were opaque, all wavelengths of light would dim at once. Instead, the strongest dips happen in the blue wavelength, which is more consistent with a screen of dust particles less than one micron across.

“This marks the first detection of the dips in brightness for this crazy star of ours—KIC 8462852—since the Kepler mission when the star was discovered,” says Tabetha Boyajian. “We monitored it here on the ground for a couple of years, and nothing happened. Then, in May of 2017 it started to dim again. This paper presents the first analysis of what happened.”

Lead study author Boyajian is closely linked to the star. After all, it was named for her. The star’s original designation of KIC 8462852 (which she rattles off without hesitation in conversation) is not something that flows trippingly off the tongue. When talking to a reporter a few years ago, one of Boyaijin’s colleagues avoided the stew of alphanumeric characters in favor of calling it ‘Tabby’s Star.’ The name stuck. Sort of.

People pointed out that when a star is named after a male astronomer or astrophysicist, convention dictates that the last name is used. The star is now officially listed as Boyaijian’s star, though it still gets called Tabby’s Star all the time (especially by people intimidated by pronouncing or spelling Boyaijian or KIC 8462852).

For this most recent work, Boyaijin and colleagues bought time at the unique Las Cumbres Observatory. “It’s the only observatory in the world that has the capabilities to do this,” Boyaijin says. “If you went to any other observatory, and said ‘I want to look at this star every two hours for five minutes all year long.’ They’d come back and say nooooo, we don’t work like that.”

But Las Cumbres works exactly like that. Using funds raised on Kickstarter Boyaijin bought time on the observatory’s 21 telescopes scattered around the world. A computerized scheduler coordinates observations around the network, gathering data on the target stars whenever it is night in their part of the world, and gathering an unprecedentedly long look at the star. In this case, they got enough of a look to notice that the short-term dimming was likely caused by small particles of dust.

But plenty of questions remain. The data doesn’t line up exactly with previous studies that pinned the star’s long-term dimming on dust. The dust in this case appears to be smaller than the particles that may or may not be causing the more long-term secular dimming that some have observed in records of the star.

And just to reiterate, it’s not built by aliens. “It would really seem to be counter to whatever you might envision if there was a manufactured something around the star,” Stassun says. “It’s hard to imagine that someone would make an object out of little particles.”

But a lot more data is needed to figure out what could actually cause the strange variations.

“We want to catch one of these big, 20-percent dips that we saw in the Kepler mission. We want to see when the next one is going to happen. Is it going to be quiet and flat for the next few years, or is this dipping going to continue to happen? What are they going to look like, how long are they going to last? All of this information is going to help us put together a picture of what is actually going on, because there are still a lot of questions out there,” Boyaijin says.

Boyaijin says that to answer some of those questions, it’s possible that they might need to mount a similar kind of crowdfunding campaign to the wildly sucessful Kickstarter that brought in more than $100,000 and 1,700 supporters. But this time, while the mysterious star will still be mysterious, it won’t have the same aura of the possibility of an alien megastructure swirling around it. What that might do to future donations is still a complete enigma.

“Hopefully no one is devastated by this,” Boyaijin says, “But my ego won’t get hurt if they decide this isn’t fun anymore because its not E.T.”

The star still has a lot to teach us about this vast and mostly unexplored universe of ours, which is thrilling in and of itself, especially as more large sky surveys and telescopes like TESS start to come online in the next few years.

“This is why I do what I do, because it is exciting and nobody has ever done anything like this before,” Boyaijin says. “We call them mysteries, but they all make sense when you apply physics to them and find the right answer. It’s really exciting to see that there’s something new out there. Who knows? There may be hundreds of them, or thousands, or hundreds of thousands of these in the sky. Once we have more missions going out there this one won’t be unique anymore. That would make this a lot easier to study, instead of this sample size of one.”