Rainbows are (literally) in the eye of the beholder

Magical phenomena are even cooler when you understand the science behind them. 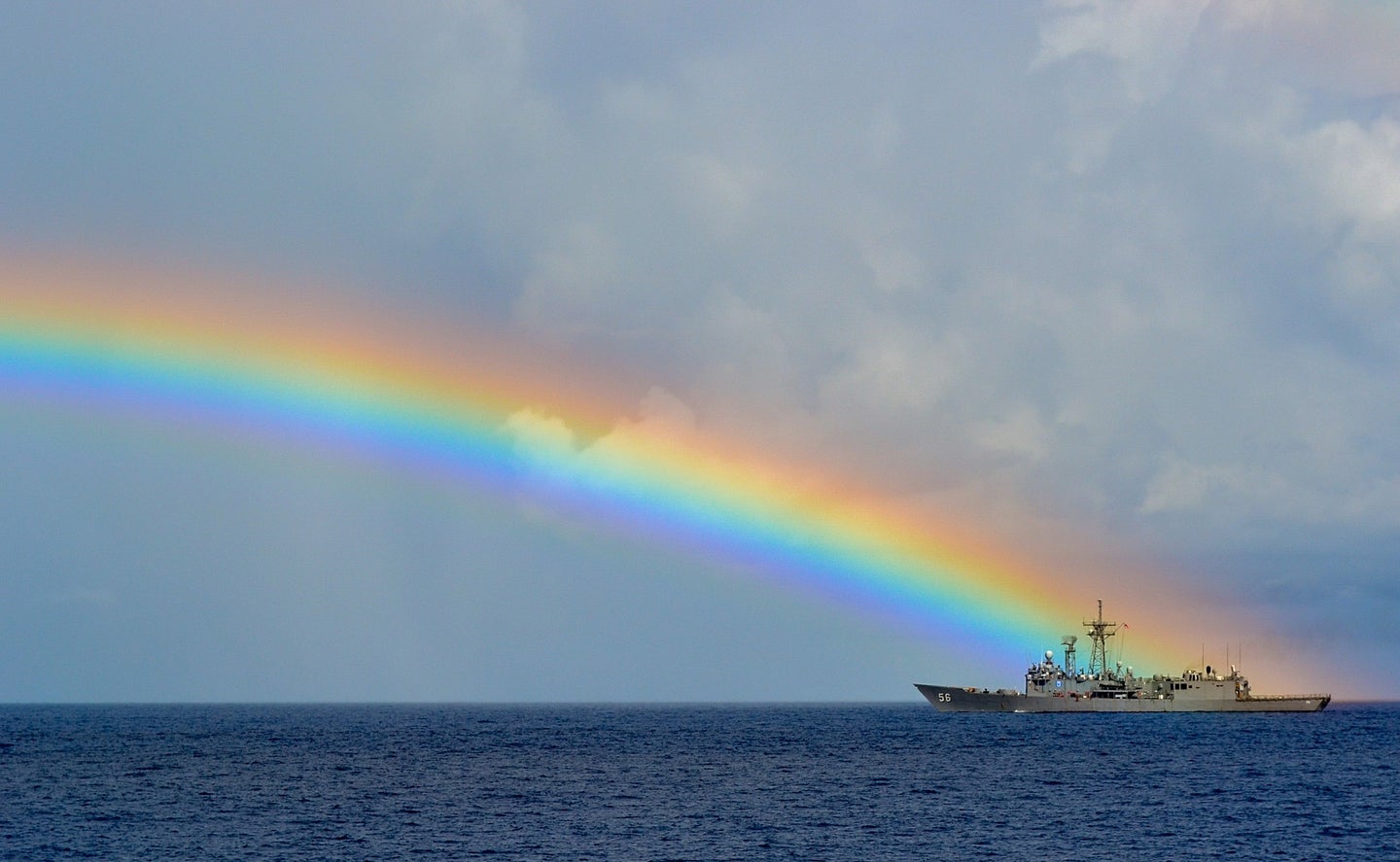 Rainbows are perhaps the closest things we have to real magic. They appear like beautiful, ghostly apparitions in the sky just as the rain clears and the sun peeks out and gosh they make you feel happy, don’t they?

Like all seemingly magical things, rainbows get even better when you understand the science behind them. Let’s start with the basics:

What the heck is a rainbow, again?

Sunlight looks white (at least to human eyes). In reality, it’s composed of many different colors of light including all of the “rainbow” shades— red, orange, yellow, green, blue, indigo, and violet. This is the visible spectrum of light for humans.

Certain materials, like water, refract that light and allow it to separate into distinct wavelengths. The wavelength of light determines its color. Short waves wiggle back and forth really fast, whereas long waves meander. In the visible light spectrum, reds are longer while violets are shorter. All these different wavelengths combine to appear white to us, but if you can spread them out you can see the individual colors.

The water vapor in the air reflects, refracts, and disperses light all the time, but it’s usually doing so in so many different directions that you don’t see one distinct rainbow. That only occurs when you have a direct beam of light coming from a single direction, as opposed to the diffuse sunlight you get during daylight hours.

After a rainstorm there are more water droplets suspended in the air, and the ensuing sunlight often comes in rays from one direction. Picture an afternoon with a few rays of light breaking through clouds—that’s the perfect condition for a rainbow. You can also get them in the mist from a waterfall, though, or the spray of the ocean.

The arc forms because the rays of incoming light bounce around inside each individual bead of water in the air and refracts out. You can see it pretty clearly in this chart:

Because the light exits the water droplet at an angle of 42 degrees, you always see a rainbow whenever you’re standing 42 degrees below where the sunlight is coming from. Or, put another way, if you drew a line from your head to the rainbow, then back to the sun, that angle will always be 42 degrees. The sun always has to be behind you, though, because the light gets refracted back in the general direction it came from. You’ll never see a rainbow when you’re facing the sun.

From wherever you’re standing, it looks like the rainbow actually exists in some physical form. Maybe it’s perched on a hilltop or stretching across the ocean horizon. Either way, it’s not actually wherever you think it is. If you saw a person facing away from you, seemingly standing beneath a rainbow, that person isn’t seeing the rainbow above them—they’re seeing it almost exactly the way you are, just farther off into the distance. Everyone is seeing it at that same 42-degree angle.

There are more colors in the rainbow than the “rainbow colors”

What we call the “visible spectrum” of light would more accurately be called the “visible to humans spectrum.” Our eyes can pick up wavelengths between 390 and 700 nanometers because we have specialized cells called cones on the backs of our eyeballs that can interpret those wavelengths as particular colors (reminder: red is at the longer end, while violet is the shortest).

But it’s not just the visible portion of sunlight that gets refracted. Ultraviolet light (shorter than violet) and infrared (longer than red) are both also refracted to some degree, we just can’t see them because our eyes don’t pick them up. Some snakes can see infrared light, though, so the rainbow would have an extra band past the red edge to them. Butterflies and spiders, along with other insects and many birds, can see ultraviolet light, so they’d also get a bonus band beyond the violet bit of the rainbow.

Dogs and cats, together with most other mammals apart from primates, all just see less of the rainbow. They don’t have trichromatic color vision the way humans do, so they only see bits of the visible spectrum. Primates almost all have three types of cone cells, each specializing in a certain region of the visible light, and together they allow us to see all colors to some degree. Most other mammals only have two types of cones, and so see fewer colors. Many humans who are color blind have a similar problem—one or more of their cone types doesn’t work properly, so they don’t see certain portions of the spectrum very well. (There are other types of color blindness, but missing cones is the most common.)

You might not even see the same rainbow as another human

There’s also a somewhat controversial idea that some cultures can actually discern more shades of color. The Himba of northern Namibia, for example, have many more words for green that English speakers do, and the Himba can differentiate between greens that look to outsiders like exactly the same color. One theory posits that it’s because the Himba have words for those shades that they can learn to tell the difference. Critics say the Himba can just naturally see the difference, and therefore have names for the shades.1

Similarly, Russian speakers can better tell shades of blue apart than English speakers can, and Russian has two categories for blue—one light, one dark—instead of one. English obviously has many words for blue shades, but we still classify them under a single umbrella. Russian separates them.

All this means that, depending on the language you speak, you might see a rainbow differently from a person standing right next to you. Our eyes may physically perceive the same wavelengths of light, but if your brain isn’t processing those rays the same, you’ll “see” different colors. Color is mostly in your brain—not your eyes.