Two Families Of Exocomets Found Circling A Nearby Star 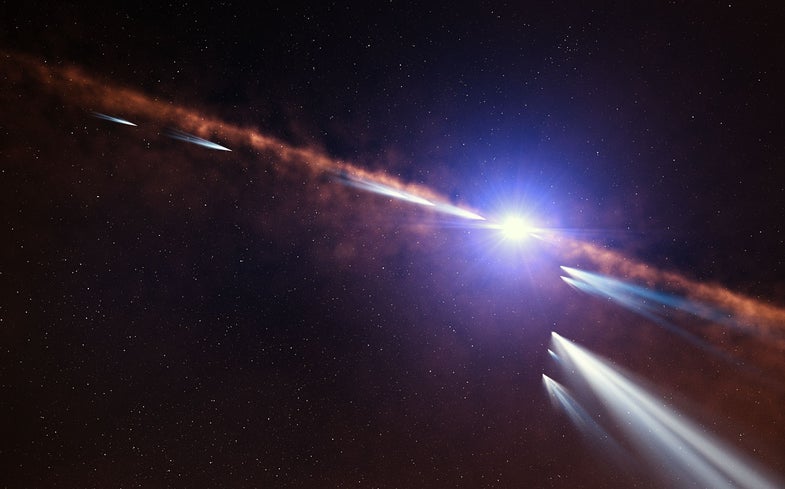 About 63 light years from our Sun, you’ll find a relatively young star called Beta Pictoris. A mere 20 million years old, Beta Pictoris is surrounded by a very active and eclectic mix of objects – including clouds of gas and dust, as well as a plethora of orbiting comets.

Now researchers are learning a little bit more about the cometary hoard that circulates around this baby star. Utilizing very precise instruments at the La Silla Observatory in Chile, French astronomers analyzed hundreds of exocomets orbiting Beta Pictoris. They discovered two distinct types of comets: an older class that have passed by the sun many times, and younger, rougher comets that are perhaps the products of a planetary breakup or collision.

Astronomers have been studying Beta Pictoris for nearly 30 years, documenting subtle variations in its light over time. It is thought that these light changes denote a comet passing in front of the star. “When the comet passes in front, there is a cometary tail which absorbs some of the starlight,” Flavien Kiefer, lead author of the study, tells Popular Science. “And when that light is absorbed, it has an impact on the light spectrum.”

Kiefer and his team of researchers reviewed more than 1,000 observations of light changes around Beta Pictoris, which were captured by the HARPS instrument on the European Southern Observatory’s 3.6-meter telescope in Chile. They selected a sample of 493 separate exocomets, sometimes analyzing them on multiple passes by the star. 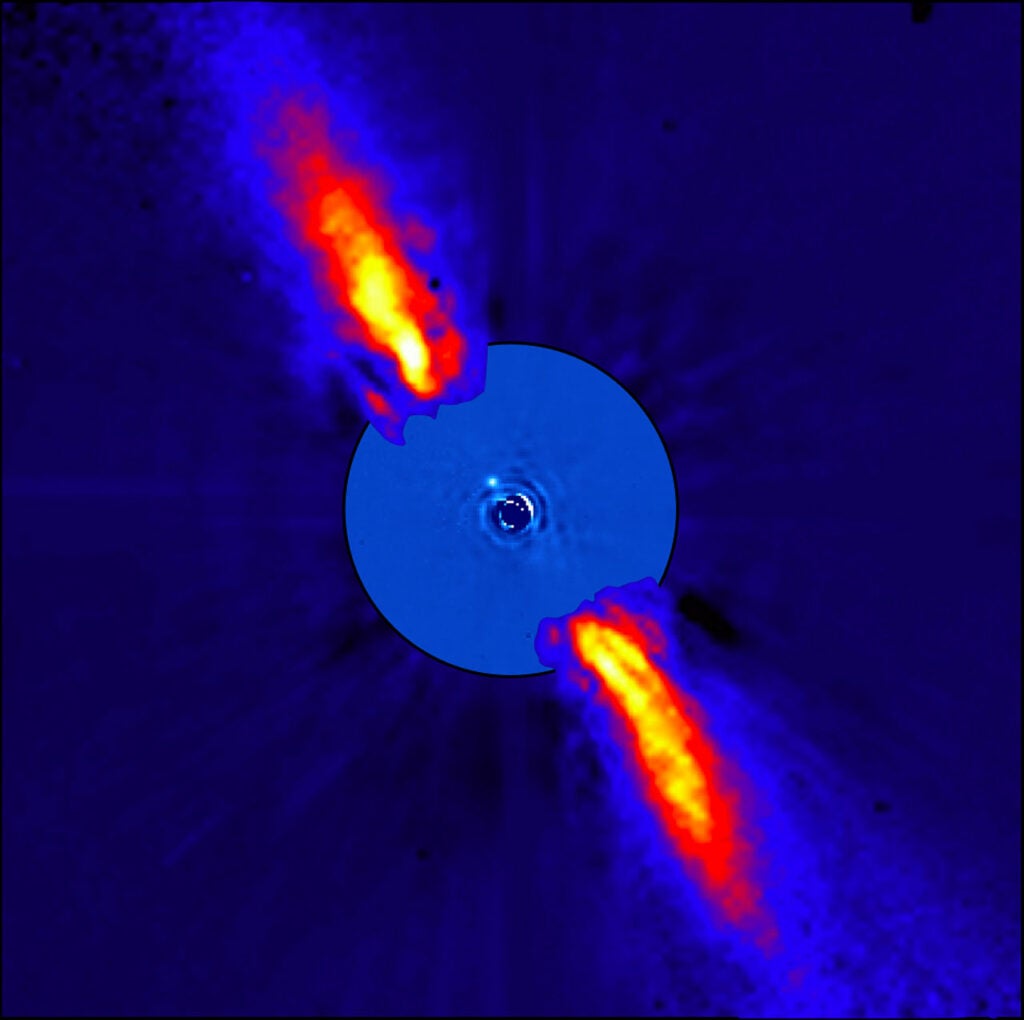 This composite image reveals the close environment of Beta Pictoris in near infrared light. The outer part shows the reflected light on the dust disc, and the inner part is the innermost part of the system.

They noticed some distinct differences in how the comet tails warped the star’s light, which revealed a lot about the physical properties and the origins of the comets. They also observed differences in the comets’ orbits.

Taking all these observations into account, the research team concluded that two very different types of comets surround Beta Pictoris. The first type of comets are much older and smoother, having passed by the star many times. Their wide variety of orbits indicates that a planet is controlling them. This object could very well be the giant planet Beta Pictoris b.

The second exocomet family consists of more active comets that evaporate a lot of gas and dust, much more so than the first family. Many comets are rich in ices, but as they get closer to a star, these ices evaporate. Since the second comet class is still giving off a lot of gaseous material, it means they are much younger than their older comet counterparts.

The uniform orbits of the young comets also reveal something very cool about their origin. It’s likely that these exocomets are the result of a breakdown of a larger object, possibly a planet. And now, that object’s fragments are in an orbit that grazes Beta Pictoris.

All of these discoveries provide clues as to how this planetary system formed millions of years ago, as well as how our own solar system formed. Just like around Beta Pictoris, there are many different classes of comets in our own system, some of which are similar to those in the study. “We see objects that are very analogous to what we know. Comets in our solar system are trapped inside by Jupiter,” Kiefer says, comparing them to the older family of exocomets. “This is just one of many similar behaviors we see.”

The researchers published their work in the journal Nature.