Teddy Roosevelt famously said “Do what you can, with what you have, where you are.” The folks at the Denver... 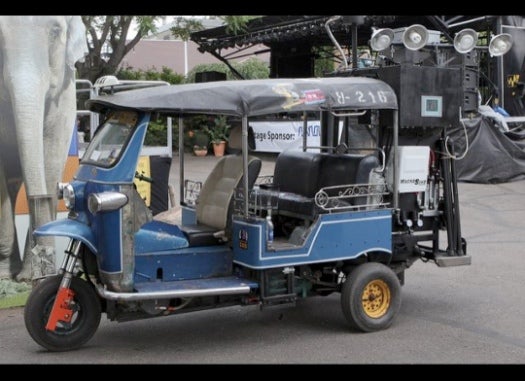 Teddy Roosevelt famously said “Do what you can, with what you have, where you are.” The folks at the Denver Zoo must have thought he was talking crap. The zoo happens to have a lot of animal dung on hand where it is, and via its own patent-pending gasification tech it is doing what it can, introducing a poo-powered rickshaw that turns animal waste and human trash into mobility.

The rickshaw was purchased from Thailand and modified to run on gasified pellets created by the zoo’s own technology. Those pellets, composed of animal waste and garbage generated by human visitors and zoo staff, aren’t just powering the rickshaw, but will be used to generate power at the zoo’s upcoming 10-acre elephant exhibit. Eventually, the zoo thinks it will be able to turn 90 percent of its waste into energy, making use not only of the copious amounts of animal poo it has on hand but also eliminating some 1.5 million pounds of annual garbage waste that previously went into landfills.

The gasification technology was designed by three full-time zoo employees working with a little help here and there from the National Renewable Energy Lab in nearby Boulder, as well as a few other companies and agencies. So it’s a home-grown, DIY system that could presumably be exported to other zoos and anywhere else animal waste is in abundance and energy is needed. This particular rickshaw has already been exported, landing at the Association of Zoos and Aquariums in Palm Desert, Calif., this week.