Yesterday–at least in the northeast U.S.–was a picture-perfect, sun-shiney day. But as many of us took a few extra minutes... 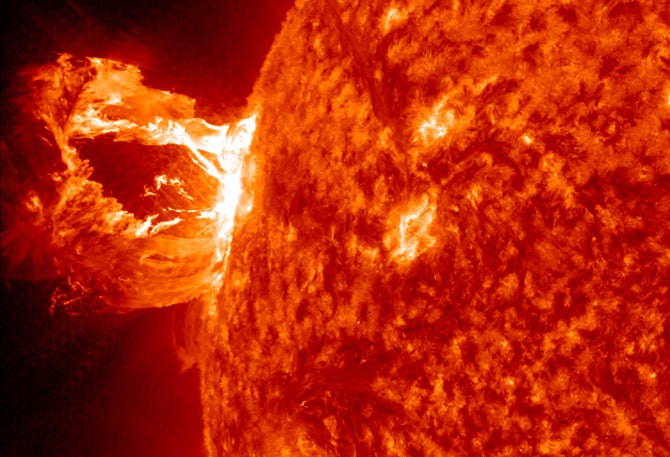 Yesterday–at least in the northeast U.S.–was a picture-perfect, sun-shiney day. But as many of us took a few extra minutes at lunch to soak up one of the first nice spring days of the season, the sun overhead was in the midst of some serious violence. At roughly 1:45 p.m. EDT yesterday, a huge and beautiful eruption took place on the east limb of our local star, sending a massive prominence looping out into space.

The explosion unleashed a rather large coronal mass ejection (CME), those sometimes-menaces that threaten satellites, astronauts and terrestrial electronics, though the CME was not pointed toward earth. So instead of a space weather warning, we get this: beautiful imagery and footage of this M1 class (that’s like a medium) solar flare and prominence captured by NASA’s Solar Dynamics Observatory. While it was quite pleasant here on the Earth yesterday, click play below to see just how crazy things were getting on the surface of the sun.