The future of user interfaces seems to be gesture-based, at least if one simply looks at where research dollars are... 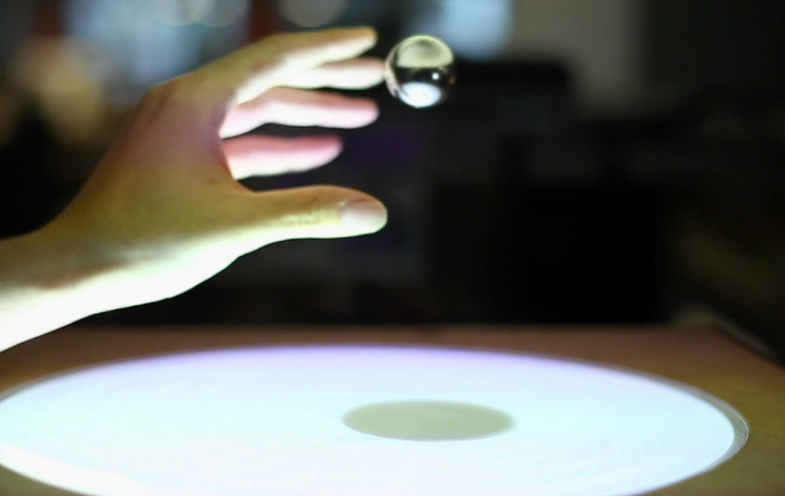 The future of user interfaces seems to be gesture-based, at least if one simply looks at where research dollars are flowing and what products–yes, like the Kinect–are coming to market. But the peripheral is not dead. Jinha Lee at the Tangible Media Group at the MIT Media Lab sees a different future, one that dispenses with gravity to create a much more tangible yet futuristic UI that lets users move and interact with floating, gravity-defying objects in 3-D space.

Lee’s prototype ZeroN is a small metal orb floating in free space that users can manipulate by moving around and placing in midair. Suspended by a highly tuned electromagnetic field, the orb really does seem to levitate, and the degree to which the system keeps the ball stable even as it is moved around on all three axes is pretty mind-blowing. The ball floats until it is moved, and when placed in a point in space it stays there. And with an added layer of software surrounding it, the orb becomes a tool for all sorts of applications.

For instance, the ZeroN can be used as the stand-in for a camera in a 3-D scene (imagine a scale architectural model placed in the ZeroN’s working space; the ball can be moved around the model, changing the point-of-view of the 3-D representation in a graphic representation). The ZeroN can also remember how it has been moved in the past, retracing a path that it was previously moved along (the ZeroN doesn’t have to be moved by a human hand, but can also be moved around the space by the computer).

The trick to all this is a precision electromagnet fitted to a moving actuator above the ZeroN’s workspace. The electromagnet can move around the space above and rapidly adjust its magnetic pull or resistance based on where the ZeroN is in space, a value that is measured every few milliseconds by an array of IR cameras. So while the ZeroN appears to float as if in defiance of gravity, the setup is purely mechanical. All it really requires is a very precise electromagnet and the right software to keep the orb stable.

Next up: replacing the actuator with solenoids, which might allow the system to place several objects in the same ZeroN workspace at the same time, allowing for whole new applications. More on this over at Co.Design and in the video below.