Where does outer space start?

It all depends on who you ask 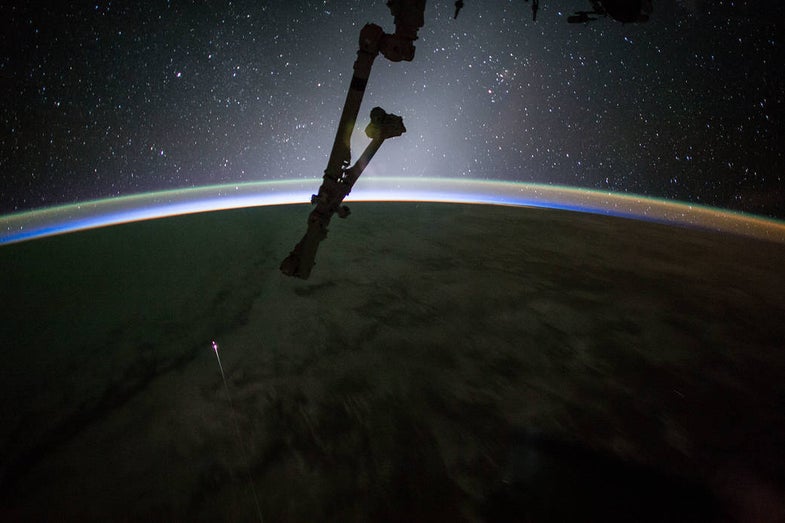 Where’s the edge of space? What seems like a simple question has an answer with more layers than the Earth’s atmosphere. You might expect that space begins where the atmosphere ends, and that could be true. But, as it turns out, no one can tell exactly where that point is. And the majority of scientists look much closer to home, placing the edge of space well within the bounds of the atmosphere.

The most widely accepted definition of the “edge of space” is 100 kilometers above the Earth’s surface (approximately 62 miles, though the number is often rounded down to 60). That altitude is what’s known as the Kármán Line, named for Hungarian physicist and engineer Theodore von Kármán, who determined that aeronautics would no longer work at that altitude. That is to say, as Paul Newman, Chief Scientist for Earth Sciences at NASA Goddard Space Flight Center, explains, “The Kármán line is defined as the altitude where you can’t fly fast enough to generate lift for an aircraft.” Aside from aeronautics, there’s another difference above and below the Kármán Line. “Below 100 kilometers, gases are well mixed by turbulent motions. Hence, nitrogen is about 78%, and oxygen is about 21%,” explains Newman. “Above 100 kilometers, the gases begin to diffusively separate because of gravity. We refer to this altitude of separation as the homopause, since everything below is homogeneously mixed.”

This 100 kilometer/62 mile altitude is what the Fédération Aéronautique Internationale (FAI), the international governing body of air sports, which covers everything from ballooning to human spaceflight, officially lists as beginning of space. “The commercial space industry seems to be using this as the goal for their tourist flights, too,” notes Dr. Terry D. Oswalt, Chair of the Department of Physical Sciences at Embry-Riddle Aeronautical University. For instance, Jeff Bezos’ Blue Origin recently launched a test of its New Shepard capsule to 65.8 miles, and Sir Richard Branson’s Virgin Galactic promises to take its guests aboard SpaceShipTwo above 62 miles.

While the Kármán line might be closest to an official international designation of the beginning of space, it’s by no means the standard for everyone. “Interestingly, the U.S. signed the FAI agreement establishing 100 kilometers as the definition of where space begins, but it still awards ‘astronaut’ status to anyone who flies above 80 kilometers, or 50 miles—the altitude where the thermosphere begins and the temperature begins to rise with altitude,” says Oswalt. This “astronaut” status applies to both NASA employees and military personnel who have reached that altitude.

There’s also another definition that was established in 2009. Citing data from their Supra-Thermal Ion Imager, researchers from the University of Calgary determined a new edge of space: They claim that 73.3 miles (118 kilometers) is a more accurate mark, as below that line, ions move more calmly, and above it, they move in a frenzy, signifying the difference between the atmosphere and space. But it’s interesting to note that 73.3 miles is nowhere near the technical outer limits of the Earth’s atmosphere, which comprises five different layers—the troposphere, stratosphere, mesosphere, thermosphere, and exosphere—that extend roughly 497 miles above the planet. In fact, scientists don’t even have a clear definition of where the atmosphere ends. It just gets thinner and thinner, until it’s gone.

Then there’s the case of the International Space Station (ISS), which, by the majority of accounts, is certainly in space. It orbits at an altitude of approximately 248.5 miles (400 kilometers), well above the Kármán Line and the University of Calgary mark. With astronauts experiencing microgravity here, you’d think this would certainly mean that 248.5 miles is safe bet for being above the edge of space, right? Well, not quite. The station—which sits in the thermosphere—is in constant free fall toward Earth, and is still impacted by our planet’s gravity and atmosphere. The ISS does slow down as it brushes through the (very thin) air, and requires regular boosts to maintain its altitude.

Astronauts floating inside the ISS are also still experiencing gravity. Their weightlessness is similar to the experience of passengers aboard a parabolic flight, where pilots maneuver a plane through the air in a giant arc. At the top of the arc, passengers experience a few seconds of weightlessness. If you’re falling at the same rate as everything around you (that is, with no air resistance), you feel like you’re floating. If you wanted to reach a point where Earth’s gravity no longer has a hold on you, you’d have to fly out about 21 million kilometers, or 13 million miles. That’s 87 times farther away than the moon.

“Each of the definitions of the edge of space depends upon what processes in the atmosphere you consider important to the problem at hand,” says Oswalt. “For example, if the place where an airplane can no longer fly is important, then that becomes your definition of where space begins. If the radiation hazard from solar flares and cosmic rays is the factor of concern, then that becomes your altitude of concern. If achieving orbit is important, then your definition might be 160 kilometers, where friction with the atmosphere is low enough to maintain what is called ‘low earth orbit.’”

That means the edge of space is less of a barrier and more of a moving target, changing as we achieve new milestones and achievements in spaceflight. The only question really is, where will we push it next?