"But by the time 2001 A.D. rolls around, things may be more fantastic than the picture shows." 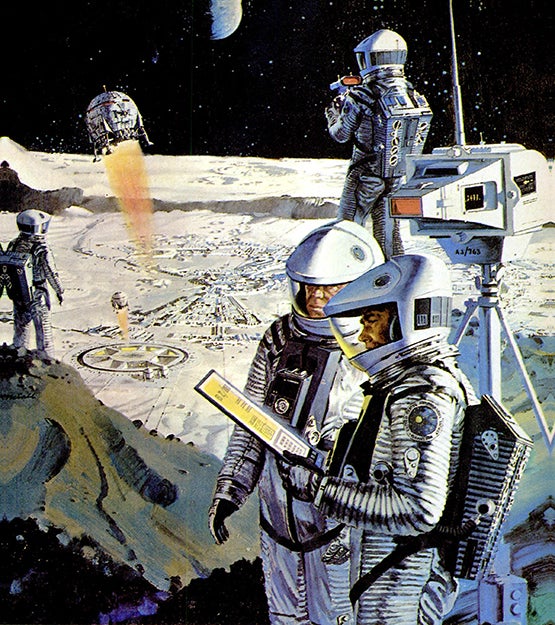 The future is here. That’s the feeling you get when you leave the theater after seeing 2001: A Space Odyssey, the most realistic science-adventure movie ever filmed. It uses an astonishing combination of camera tricks and scientific fact to give you the closest thing possible to the actual sensations of space travel. 2001 shows the boldness of a new breed of heroes who conquer space to colonize the moon—and the heartbreak of death when a rescue mission fails and an astronaut becomes a satellite around the sun. Here’s the fascinating scientific background for the scenes that the camera caught — plus some of the amazing things you don’t see on the screen that made it possible.

The picture ranges from the dawn of man — which is shown with the aid of a revolutionary new projection technique — to the discovery of extraterrestrial intelligent beings in outer space. The existence of such life somewhere in the universe is the absolute conviction of Arthur C. Clarke, famous scientist and spinner of science- fiction tales, and producer-writer-director Stanley Kubrick, who co-authored the screenplay. By the end of the movie, you may be convinced yourself.

Why is it all believable?

Kubrick and his staff did painstaking research to make sure that everything they show in this incredible movie will be achievable in 33 years.

Recruiting scientists. Starting five years ago, they canvassed leading scientists from many nations to find out how far into space man would venture and how he’d get there. Consultants from the NASA Voyager program were hired to help create the spacecraft and sets. Their suggestions were given form by art director Tony Masters at MGM’s British studios, where the movie was filmed. Masters had 35 set designers working under him for the job.

Scientists at the NASA Marshall Space Flight Center, Huntsville, Ala., helped set the designs for six types of spacecraft seen in 2001. These space vehicles, Clarke predicts, will influence designers of real ships for years to come.

Masters’ team designed an entire system of craft, all with unique characteristics, to provide movie space travelers with all types of transportation. “It wouldn’t do to have the wasteful kind of spacecraft that are used only once, like today’s,” says Frederick I. Ordway, a leading NASA consultant. So they created vehicles that, theoretically, could be used over and over.

Here’s an inside look at the technical background of 2001‘s space fleet:

Orion. It looks more like an aerospace plane than a rocket. The 50-passenger liner carries you from earth to an orbiting space station 200 miles up. Orion, which looks like a far-out hypersonic jet, is similar in idea to NASA’s Dyna Soar project. You can get a good idea of its capability by imagining it to be a much bigger X-15. The X-15, a supersonic, high-altitude experimental plane, could be modified to boost itself beyond the earth’s atmosphere, the way Orion does.

You experience weightlessness in this craft when it leaves the earth’s gravitational field. But soon Orion arrives at a great space station, more than 1,000 feet in diameter. It has been constructed in space and revolves like a giant celestial Ferris wheel to create artificial gravity.

Space Station 5. At the core, where you land, there is practically no gravity, but as you go down the spoke to the rim, the gravitational field gets stronger until it equals that of the earth.

In this space city there is a scientific area where weather observations are taken and relayed to earth regularly. You get a glimpse of the space terminals of the future, with touches to make you feel right at home: spacious lounges in which you wait for the ferry to the moon, a Hilton Hotel for catching a night’s sleep, gift shops, even a Howard Johnson restaurant.

You can use a credit card to call earth and speak to loved ones on a Picture phone. It’s no prop; it was created with the help of Dr. John R. Pierce of Bell Labs, who designed the Telstar communications satellite. All these comforts should make waiting for connections in bases like Space Station 5 not much different than in today’s airports.

Aries IB. Soon you’re off for the moon in an advanced lunar shuttle. It looks like a lunar module of perhaps 20 or 30 years from now.

Aries IB lands in a busy, self-sufficient moon base where people live and work. Although no moon photos from Ranger were available when the film’s lunar sets were started, the lunar surface is remarkably realistic.

For one fantastic set, an excavation in the moon crater Tycho, workmen dug a hole 60 by 120 feet and 60 feet deep.

Then Kubrick had samples of sand brought in from all over the British Isles in an attempt to match what lunar earth would look like. But no sample seemed right.

Their solution? Buy 90 tons of ordinary sand, wash and dry it, then dye it the color it should be before dumping it in the hole to form the excavation floor. Color photos from Ranger later confirmed that they had hit the color and texture right on the nose.

Operations had to close down at one point in the shooting when a bat invaded the crater. There aren’t supposed to be bats on the moon, even in 2001. The shooting resumed when the bat was finally routed.

Lunar bus. You get to the Tycho crater from the moon base in still an- other vehicle—a lunar bus. This is a short-haul vehicle similar to the lunar flying-vehicle prototypes produced by Bell Aviation. It’s designed for routine cargo and personnel movement.

Discovery. This deep-probe craft, which designers call the “pride and joy of the film,” carries the film astronauts a half-billion miles to the vicinity of Jupiter.

Conventional rockets burning chemical fuel would be inadequate to propel a manned spacecraft to so distant a target, so the designers of Discovery looked into the future to provide it with a more advanced propulsion system.

The basic design for the craft came from starting with the idea that it would need nuclear propulsion similar to the plasmadyne engine GE worked on for NASA deep-space probes.

The 2001 design team conferred with GE’s rocket engineers on utilizing this concept for Discovery. They came up with a stunning design. Discovery has an enormous propulsion section in the rear that’s separated from the command and living quarters by a huge boom. It is scaled to look 700 feet long. The great length attenuates the radiation and helps shield the crew.

Actually, Kubrick built a magnificent 54-foot model of Discovery, and additional sets for the command and living modules—which form a giant centrifuge that really turns. The mammoth wheel includes:

The living quarters also have four hibernaculums—chilled cabinets—where nonworking astronauts are put into hibernation. The sleeping cocoons were designed with the help of Dr. Ormond G. Mitchell, Assistant Professor of Anatomy at New York University Medical School, a specialist in the development of hibernation techniques for humans. The nine-month journey of Discovery to Jupiter requires only two astronauts to work at a time, so, to conserve the life-support systems, other astronauts are put into controlled sleep until their shift arrives.

Realistic control panels. The vehicles and sets in 200.? are compact and look functional. You don’t see the phony controls that are the rule in most science-fiction movies.

The control panels were meticulously worked out with help from Honeywell, which has done a great deal of work on space-control systems for NASA. Honeywell prepared a massive study for Kubrick’s scientists and designers to guide them in creating realistic cockpits and spaceship interiors.

Even the dialogue has been thought out, to sound like the kind of talk that goes on between astronauts in flight and mission control on earth in 2001. Honeywell compiled a glossary of space terms to guide the film makers.

Then a man who could speak the terms without sounding like an actor had to be found. Kubrick hired a veteran Air Force warrant officer in Europe with many years in control-tower work, who could play mission control convincingly.

Real star photos. You could expect the sky and stars to figure prominently in this film, and they do, but not haphazardly. Pictures taken through the giant telescopes of Lick, Palomar, and other observatories provided the skies for the film. The spacecraft were placed against the sky backdrops so that they would be in the right relation to the stars. The pictures had to be constantly changed to keep up with the various voyages.

In some cases, little was done to improve on present-day techniques, for fear of taxing the credibility of viewers. The spacesuits worn by the actors seem quite ordinary—but, as Clarke says, there won’t be much change in spacesuit design in the next 33 years. But advanced control boxes for traveling outside their spacecraft give the astronauts something that’s still not available.

Credibility also dictated that the astronauts fly to Jupiter rather than Saturn, as the script originally called for. “If we tried to create the landscape of Saturn,” Clarke says, “people wouldn’t believe it—it’s too fantastic.”

But by the time 2001 A.D. rolls around, things may be more fantastic than the picture shows. Today’s scientists may be over conservative in their predictions—and over pessimistic about what man can accomplish.

Clarke echoes these sentiments. He feels that because outer space is a “benign environment”—not as rough on man as the Antarctic—the hazards are probably overstated. The skeptics claim those hazards will prevent man from exploring outer space extensively, Clarke says, but the doers always seem to find ways.

This was originally published in the June 1968 issue of Popular Science.