Before the 1967 Space Treaty, the Air Force attempted a few satellite and shuttle launches. Many of them failed. 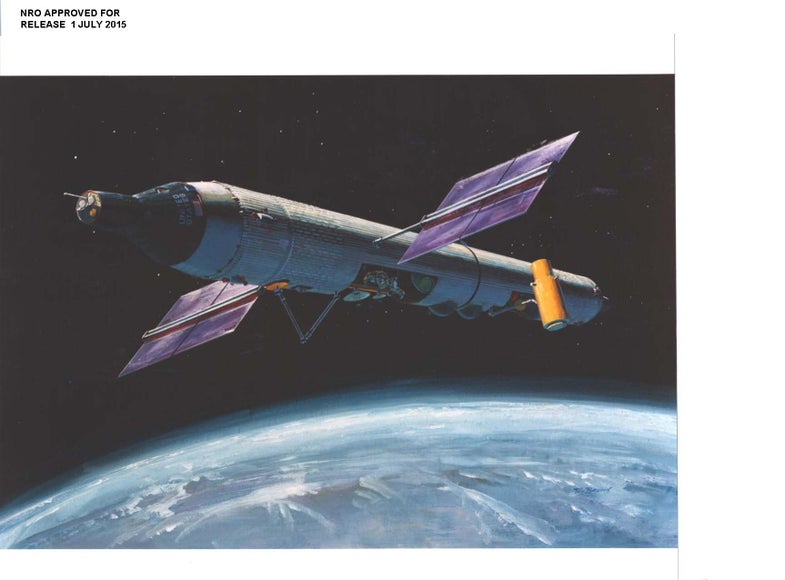 If President Donald Trump’s Space Force idea actually comes to fruition, it won’t be the first military force aiming for space. Not by a long shot. In fact, the idea of installing a military presence in space is as old as the space age, and the United States came close to establishing its own space force in the 1960s.

But there are a few differences. For instance, no one knows quite yet if the Space Force will involve eventually putting military personnel in space or if it will simply involve boots on Earth, and lots of robotic technology in the sky.

“I think Space Force is as much about career path for Department of Defense satellite operators,” Jonathan McDowell, an astrophysicist with Harvard and spaceflight historian, says in an email. “It’s not really about human spaceflight at all.”

Let’s get this out of the way: there are Department of Defense satellites in space. The Boeing X-37B, an uncrewed space shuttle, has flown a series of classified missions in the last decade-plus, all with a lot of secrecy as to what it’s doing. Strategic Command keeps track of what’s in space, and the Air Force has a brand new satellite and space junk tracking “space fence” expected to go online next year. Lots of astronauts began their career in the military. So in some ways, there’s a sizeable military presence in space.

But there are also no dedicated military astronauts or space craft right now. It’s unclear how soon any Space Force plans would call for that. But that wasn’t always the case.

In the 1960s, the USAF was working in earnest to carve out its own place in space. They technically launched a prototype space station into space, but never quite got boots on the ground…or into microgravity, more accurately.

There were also many attempts to establish space-ready military vehicles in the 1950s and 1960s. The Air Force worked with Bell Labs in the 1940s to create the X-1 experimental plane, which utilized rocket engines. Chuck Yeager’s famous 1947 flight on an X-1 became the first to break the sound barrier. But Yeager was only eight miles up, about 42 miles short of the 50 mile mark the Air Force has long considered the boundary of space. (NASA sets it at 62 miles, or 100 kilometers.)

The Bell X-1 flight catalyzed an interest in hypersonic flight. In 1948, Yeager would reach a height of 13 miles, the highest and fastest flight to date, reaching speeds of 957 miles per hour.

The X-1 was also the first aircraft in the X-Plane program, a loose grouping of experimental aircraft tested and operated by some variance of the National Advisory Committee for Aeronautics (NACA), its successor NASA, and the Air Force. Subsequent X-planes all worked on technologies that could be applied towards space exploration or other related high-altitude flight. Notably, the X-13 tried to create vertical take-off and landing (VTOL) technology that sounds a little like our re-landed rockets in the private space industry today, and the X-8, X-11 and X-12, which were literally missile rockets.

Most early X-planes had high altitude ambitions, but the X-15 was meant to specifically be a military space plane. It was designed by North American Aviation in cooperation with NASA and the US Air Force. Its first flight was in 1959, but in 1962, the flights began to aim higher than ever before.

Much of the personnel who flew X-15 missions came out of the X-20 Dyna-Soar program, which was a plane strapped atop a more conventional launch vehicle rocket.

Flight 62 of the X-15, taking place in 1962, hit a benchmark of 59.6 miles, just short of the edge of space by NASA’s definition (but not the Air Force’s.) Two more flights reached above 50 miles as well, flights 77 and 87. But flights 90 and 91 reached altitudes of 65.8 and 67 miles in 1963. Joseph A. Walker, the pilot on both flights, had reached into space during his 12 minute suborbital flights, hitting speeds of 3,710 MPH. He was also technically the first American to go to space twice, with Gus Grissom becoming the first NASA astronaut to do so in 1965.

In 2005, Walker and two other X-15 pilots—Bill Dana and Jack McKay—received their astronaut wings from NASA.

But while the X-15 was under development, the Air Force was surreptitiously eyeing space for another purpose: intelligence gathering.

In 1960, the Air Force launched—or attempted to launch—the SAMOS E-5 satellite into orbit. It never went terribly well. The first flight lost control; the second flight made it to space in 1961, while two others suffered additional failures. Famously, the SAMOS-3 mission exploded on the launch pad. You can see that here. Missions 5 through 11 were all successes to a limited extent in the sense that they got to space, but didn’t quite fulfill their mission goals.

“The first possible US military astronaut program was the 1961 SAMOS E-5 spy satellite, which had a pressurized cabin and would have (if it had ever flown a successful mission) returned to Earth with a camera,” McDowell says. “Stupid design for a spy sat, so many of us think it was a back door way to get a USAF equivalent of Mercury up and running. Never got that far as the spy sat flights were all failures.”

But the Air Force was also ramping up for another project at this time. Known as the Manned Orbiting Laboratory (MOL), it would have been the first space station.

The program was forming parallel to NASA’s own Gemini program, and would have used a modified Gemini capsule to ferry astronauts to and from the MOL. The MOL itself resembled a hollowed-out rocket body with a Gemini attached at the front. The public perception was that it was a military space station, without much detail added. But in reality, it was a spy station, intended to keep watch over Iron Curtain states in the Cold War era from afar.

The Air Force had selected crew for each of the three proposed MOL phases, with crews of two spending up to 40 days each in orbit, taking recon photos and otherwise monitoring near-Earth space. This included Robert Henry Lawrence Jr. who, had he flown, would be the first black astronaut. Lawrence was killed in a Lockheed F-104 Starfighter accident in 1967. (Despite its name, the Starfighter was a standard fighter jet and not a space plane.)

The MOL was “dominated” by the Air Force, Michael Neufeld of the National Air and Space Museum says, but it actually involved members of other branches of the military, including the Army and Navy. In 1966, a test flight was sent up, uncrewed. For a few years, there was a space station technically up there…just without a crew. It spent two months in orbit before decaying into the atmosphere.

Just a few years later, the program was cancelled entirely.

“MOL was a Department of Defense reconnaissance satellite program that the Nixon Administration cancelled because of rising budgets, multiple launch delays and the argument that robotic recon sats could do the job nearly as well,” Neufeld says.

Seven MOL astronauts transferred to NASA at the end of the mission, several of whom flew multiple shuttle missions. Richard Truly, one of the first MOL recruits, flew the second prototype Enterprise shuttle mission, which didn’t reach space but tested out the landing capabilities of the craft prior to its first real space launch. He later flew aboard STS-2 and STS-8 in the Columbia space shuttle and eventually served as NASA administrator under President George H.W. Bush. Robert Crippin, part of the second group of MOL astronauts, flew the first shuttle mission in 1981. Other MOL-turned-Shuttle astronauts were Karol J. Bobko, Charles Gordon Fullerton, Henry Hartsfield, Robert Overmyer, and Donald Peterson. Albert Crews and James Abrahamson joined NASA in other capacities.

McDowell says that the last real effort of the military involved a group of “Manned Spaceflight Engineers,” military trained personnel meant to handle highly classified payloads aboard space shuttle flights. “They trained 32 of them, but only two flew,” McDowell says. Gary E. Payton flew on STS-51-C, and William A. Pailes flew on STS-51-J, both in 1985. STS-51-J was, incidentally, piloted by Karol Bobko, one of the MOL astronauts who transferred to NASA.

The Space Shuttle program did ferry up a few other Department of Defense personnel, but none came out of an official program. There was some chatter in the 1980s of increasing an Air Force presence in space. The Air Force went as far as setting up a mission control in Sunnyvale, California. “It would also have been mission control for military astronauts when that was talked about in the Shuttle era,” McDowell says. “It’s located not far from the Lockheed factory which built the spy sats.”

But Trump’s Space Force seems to be an altogether different proposition from any of these programs and other previous military involvement in space, potentially also testing the bounds of the 1967 Space Treaty, which outlines and restricts certain military involvement in space. It also would take away a lot of services performed by the Air Force and give them over to this entirely new branch. That isn’t just spy satellites or other classified activities. That includes things like tracking space junk. It also may not put quite as many boots above the ground as the mental images might confer. (There aren’t, yet, a ton of outlined plans or details for what the Space Force actually entails.)

“Equating the Space Force idea with military astronauts is quite misleading,” Neufeld says. “Almost all of it would be transferring the USAF space assets, including ground control, satellites in orbit, satellite operations, launch operations (like the 45th Space Wing at the Cape) to a separate service.”

“It will be very disruptive on the Air Force to do this,” he says. “It might also involve transferring some Navy and Army elements. Where the [National Reconnaissance Office] NRO falls in all this, a military space agency jointly staff by DoD and CIA, would be one of the conundrums.”

So even if there aren’t Space Force astronauts up there, there still could be a whole lot of confusion in the course of establishing a Space Force, and a lot of unanswered questions. At some point, perhaps, there will be a more concrete plan as to what it actually looks like—but there’s a history as old as NASA’s spaceflight program to look back to when it comes to a military presence in space. And if Space Force comes to pass, it’s going to upend a lot of historical precedent.