A mystifying trick of the sun, inappropriately interfering with particles on Earth, could be used as an early-warning system for... 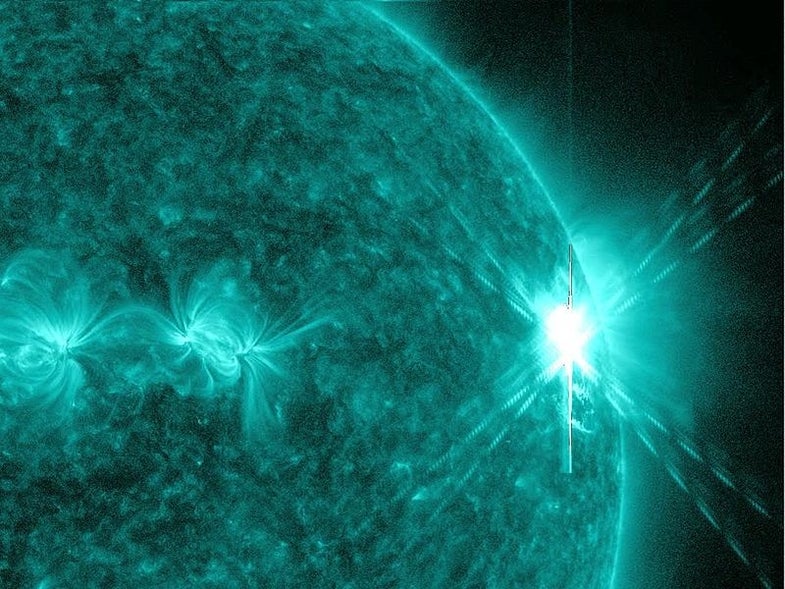 On August 9, 2011 at 3:48 a.m. EDT, the sun emitted an Earth-directed X6.9 flare, as measured by the NOAA GOES satellite. These gigantic bursts of radiation can disrupt the atmosphere and interfere with GPS and communications signals. New research shows that strange solar interactions with radioactive particles on Earth could be used as an early warning system for flares like this one. NASA
SHARE

A mystifying trick of the sun, inappropriately interfering with particles on Earth, could be used as an early-warning system for solar flares, a new study says. With enough warning, satellites, telecommunications infrastructure and even orbiting astronauts can take cover from our star’s worst radioactive eruptions.

This all goes back to 2006, when physicists at Purdue, Stanford and other places noticed something that at first defied physical explanation: Radioactive elements were changing their decay rates. This flew in the face of long-accepted physics theory, which held that these rates are constant. Radioactive decay apparently grew more pronounced in winter than in summer, and when scientists went looking for an explanation, they noticed this appeared to correlate with solar flares.

Last year, we learned from Purdue physicist Ephraim Fischbach that this kept happening. He noticed a change in the radioactive decay rate of a manganese isotope, and also tied it to a solar flare that happened a night before. So that meant something came out of the sun, went through the Earth, hit a piece of manganese-54 and changed the rate at which it decays into chromium-54, spewing out ionizing particles. This also happened to an isotope called chlorine-36, in different experiments at different labs. The unusual decay change has happened during 10 solar flares since 2006, and the song remains the same.

“We have repeatedly seen a precursor signal preceding a solar flare,” Fischbach says in a new news release. “We think this has predictive value.”

That’s good news — an imminent-solar-eruptor-detector could help astronauts on the International Space Station or en route to Mars take cover, or it could notify people on Earth that they should shut down power plants and communications infrastructure to guard against another Carrington event. That gigantic solar flare and coronal mass ejection, back in 1859, caused telegraph wires to glow and the aurora borealis to appear as far south as Cuba.

The potential solar sensor would consist of a chunk of manganese-54 and a gamma-radiation detector, which would record the manganese’s rate of decay into chromium-54. If it changes, you’d know to take cover. Purdue filed a patent application for the concept.

The bad news is that still, no one knows why this happens. It may be an interaction among ionizing particles and neutrinos, but those things are puny, chargeless and mostly unwilling to interact with any normal matter. It’s still a mystery, said Fischbach’s colleague at Purdue, nuclear engineer Jere Jenkins. “We are saying something that doesn’t interact with anything is changing something that can’t be changed. Either neutrinos are affecting decay rate or perhaps an unknown particle is,” Jenkins says.

Research describing the detector appears in the journal Astroparticle Physics.