Most of us might regard the sun as a quiet, passive disk blazing in the sky, but it’s extremely active, constantly launching streams of plasma and charged particles toward Earth. Luckily for us, Earth’s magnetic field mostly deflects that angry firehose, but certain kinds of solar activity can interfere with the magnetic field, causing severe geomagnetic storms.

This is what causes the northern and southern lights, but a really bad storm can also knock out power grids, leading to blackouts and untold headaches. Damage and disruption from a solar storm could cost more than $1 trillion, putting other recent natural disasters to shame.

To plan for such disasters, power utilities need to understand not only the sun–which scientists are increasingly trying to do–but the Earth, too. A new map covering about half the continental U.S. shows how Earth’s own electrical conductivity can affect geomagnetic storms.

In a major solar storm, particles from a coronal mass ejection (CME) would stream toward Earth, smashing into the magnetic field and flowing around the planet like a firehose stream hitting a wall. The field would warp and twist, and though it’s invisible, observers at extreme latitudes would be able to see particles dancing around it–the aurorae. Some of the particles would make their way to the ground, where they would continue to spread, like a current through a power line.

Jeffrey Love of the U.S. Geological Survey and his colleagues built a statistical map showing where these ground-based currents would happen. The map is based on survey data from the USGS and an Earth-observing program called EarthScope, a network of seismic and other geophysical instruments that measure the North American continent. It appears in the new issue of Geophysical Research Letters. 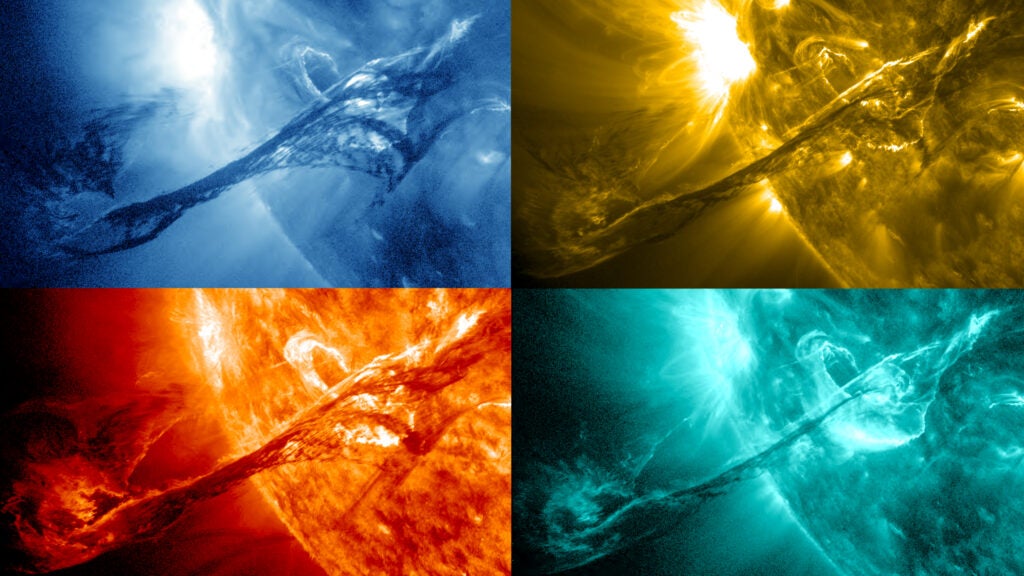 Four images of a filament on the sun from August 31, 2012 are shown here in various wavelengths of light as captured by NASA’s Solar Dynamics Observatory. Starting from the upper left and going clockwise they represent light in the: 335, 171, 131 and 304 Angstrom wavelengths. Since each wavelength of light generally corresponds to solar material at a particular temperature, scientists can compare images like this to observe how the material moves during an eruption.

The amplitude of these geoelectric fields depends on the intensity of the sun’s output. But it also depends on the geology and tectonics of the Earth’s crust, in a way that scientists are still trying to understand. Minnesota and Wisconsin have some of the highest geoelectric hazards, while Florida has some of the lowest. The hardest-hit places would apparently be in northern Minnesota, where ancient faults and suture zones place volcanic rocks against sedimentary rocks, the authors say. The electrical conductivity of this area spans three orders of magnitude, potentially resulting in strong ground-based geoelectric currents.

Though the researchers studied the Earth’s subsurface electrical conductivity at a wide range of sites, there isn’t a national data set for this information, they say. A nationwide survey, coupled with extra geomagnetic monitoring stations, would improve the forecast.

“A high-priority area is the northeast United States, a region that includes several major metropolitan centers and corresponding electric-power grid infrastructure, all of which are situated on top of complicated geological and tectonic structures,” the authors said in the journal, “and at latitudes where geomagnetic activity can be locally intense.”

Solar flare activity is pretty low this week, so we probably don’t have much to worry about for the time being. But that’s almost certain to change in a matter of days, as the sun keeps spinning and turning a new face to Earth, one that might bring the powerful CMEs that can cause electrical storms in space and, apparently, on Earth.